A Tribute to Secretary Lawrence Eagleburger 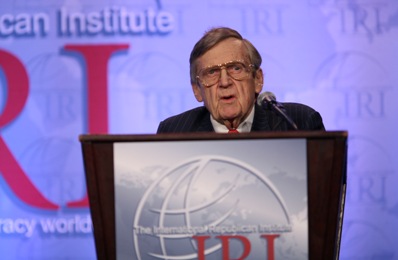 I received last Wednesday night what must have been one of Lawrence Eagleburger’s final emails.  “I have a fairly strong case of pneumonia” he wrote, “and will be out of service for a while.  I’ll call you later.”

In the meaningful sense that the word was once used, I cannot claim to have been a friend of Larry Eagleburger’s.  That privilege belongs to a select group of men like Henry Kissinger, Brent Scowcroft and James Baker.  However, I did know Eagleburger for more than two decades, first as a State Department Deputy Assistant Secretary of State (DAS), then as head of IRI, where Eagleburger served on the Board of Directors.

As a student of history, I was an appropriately awed 30 year old when, early in the George H.W. Bush administration, I first escorted Deputy Secretary Eagleburger as he briefed a number of U.S. Senators.  On the ride to Capitol Hill, Eagleburger did his best to put me at ease by asking about my background, then for my opinion on the upcoming Senate meeting.  In the Senate meeting, he candidly admitted that the Department’s pursuit of a particular policy looked “really stupid,” but then patiently explained why we were doing it, and, after a back and forth, what we hoped to gain.  When the meeting was over, some of the Senators left the room still disagreeing.  Not used to such bluntness and honesty from, and being treated as equals by, a Foggy Bottom envoy, they nevertheless decided to give the Department running room.  As a legislative affairs DAS, he quickly became my favorite figure to take to the Hill.

As I would learn over the next few years, crucial for the smooth institutional development of Bush 41 administration foreign policy was Eagleburger’s decades-old, close relationship with the then National Security Advisor, Brent Scowcroft.  At State (and I later learned, when I moved there, at the National Security Council (NSC)) we all knew there was no point in engaging in bureaucratic turf battles between the two buildings.  Eagleburger and/or Scowcroft would find out who the culprits were, and that would be the end of that – and perhaps, we thought, of us.  Of course, Secretary James Baker’s close relationship with President Bush set the tone, but there were many details that could have gone awry.  Given the tensions that have existed before and after between the NSC and State, the close Eagleburger-Scowcroft relationship was indispensable in what is generally regarded as the best functioning national security team in modern American history.

Eagleburger’s talents, of course, extended beyond beltway diplomacy.  Many obituaries, for example, have noted his crucial mission to Israel in the first Gulf War, and his use of knowledge gained in years of service in Yugoslavia.  His success stemmed partly from keen analytical abilities.  As the Cold War was winding to a close in 1989, and some were predicting the end of history, an Eagleburger speech prophetically forecast that we would face a “fundamentally different set of challenges” and that “the multipolar world into which we are moving [is not] necessarily going to be a safer place.”  At a 2000 IRI event at the Republican Convention, he pinpointed South Asia as the region that would be most prone to crisis in the new decade, then discussed the effect that an aging American population and new technologies would have on foreign policy.  In early 2001, Eagleburger warned me about strains in U.S.-European relations.  I protested that there had been ups and downs in U.S.-European relations for decades, but Eagleburger countered that the strains were different in quality – as those of us who joined the George W. Bush administration learned.

Eagleburger is rightly regarded as a realist.  In 2001, upon being told that I would lead the State Department’s Bureau of Democracy, Human Rights and Labor, he said, “well, I’m not sure they should have that bureau” then paused before saying, “but if they do, you’re the right person to lead it.”  (I took that as a compliment).  In a 2008 GOP Convention appearance with IRI, he warned a Georgian delegation that the U.S. would not be drawn into a conflict with Russia over the recent invasion.  But over the years, he exhibited a keen understanding of IRI’s approach to democracy assistance in Russia, China and elsewhere.  Commenting on the Arab Spring in a mid-April email, he wrote, “…you need to be active everywhere, helping those seeking to undermine the hold-overs, and – at least as important – helping the new replacements to establish regimes that want to become truly democratic.  And, they need to be warned, time and again, that they must guard against the infiltration of radical elements…into their midst.  Keep at it, and I will be able to enjoy a tranquil retirement.”

No one is without their vices.  Once, standing outside Eagleburger’s State Department office, I overheard his secretary phoning his host regarding dinner preferences, “red meat…rare…with lots of Béarnaise sauce…”  Eagleburger remained a smoker to the end.  In 1989, there was a short-lived effort to ban smoking in the State Department, but Deputy Secretary Eagleburger successfully argued that our foreign guests would be offended if they couldn’t light up.

That he lived into his eighties, outlasting his wife Marlene, is a tribute to his strength – and to his devoted family.  Two of his sons, Lawrence Jason and Lawrence Drew, accompanied Eagleburger to the 2008 GOP Convention.  IRI’s event, where he and others spoke, was on the first day, and our other speakers quickly departed Minneapolis-St. Paul.  Eagleburger, who had been vice chair of his Wisconsin congressional district’s Young Republicans in 1950-51, asked to stay on with us to watch the proceedings.  As his sons confided, he felt it might be his last convention.

There have been and will continue to be other outstanding career diplomats in our country’s service, but Eagleburger brought a unique combination of intelligence, wisdom, bluntness and humor to American diplomacy.  We will not see his like again.  Our nation is richer for his life, and poorer for his passing.