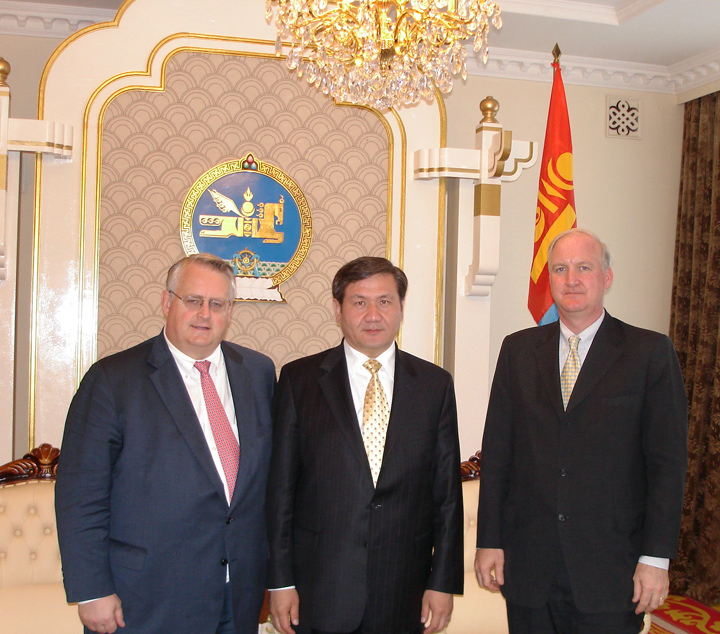 Richard S. Williamson, former U.S. Ambassador to the United Nations and a member of the Board of Directors of IRI, led an IRI delegation to Mongolia in late June to mark the 800th anniversary of Mongolia and to observe the remarkable success of democracy in the Northeast Asian nation.  The delegation also included IRI President, Lorne W. Craner, and former IRI Mongolia Director, John Poepsel.

Highlights of the delegation’s visit included meetings with President N. Enkhbayar, Prime Minister M. Enkhbold, Speaker Ts. Nyamdorj, the General Election Committee, the leadership of the major political parties, the members of the Women’s Partnership in Politics (WPIP), and a number of Members of Parliament (MPs).

Prime Minister Enkhbold commended IRI’s work in Mongolia and expressed his support for IRI programs, particularly in the areas of parliamentary development and election reforms.  The delegation discussed the strength of the U.S.-Mongolian relationship, which was highlighted in November when President George W. Bush became the first-ever sitting U.S. President to visit Mongolia.

Ambassador Williamson met with representatives from the Mongolian People’s Revolutionary Party, the Democratic Party and the Citizen’s Will Party.  All of the political parties thanked IRI for its assistance in past political party work and continued strengthening of parliamentary institutions.  Each of the parties also requested that IRI increase its work in the country.

IRI’s Mongolia office hosted a reception for the delegation and MPs who had participated in IRI’s study tour to the U.S. last fall.  The MPs were brought to the U.S. to attend briefings on good governance and transparency and have since become some of the strongest voices for continued reform within the State Great Hural (Mongolia’s parliament).

In addition, the delegation met with members of WPIP, which was formed with IRI’s assistance in early 2005 and seeks to increase the role of women in politics.  Comprised of the women’s auxiliaries of the four largest political parties, WPIP participants have set aside ideological differences to focus on increasing women’s political participation.  The members thanked IRI for its close support over the past year, and expressed their desire for continued cooperation.

IRI has been active working to build democracy in Mongolia since 1992 and recently received an additional three years of funding for parliamentary and elections work.  Among nations transitioning from communist systems, Mongolia has been particularly effective in moving toward democracy and a multi-party system.  For several years, many observers have viewed Mongolia as being in the critical “second phase” of democracy transition; that is, with many of the basic tenants of democracy in place, the focus has now shifted to strengthening institutions and increasing transparency and responsive governance.