Building Relations with India: An Exchange Visit with the Bharatiya Janata Party 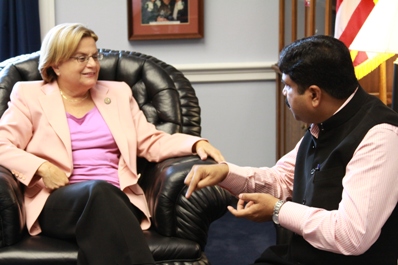 In the first ever exchange visit with an Indian delegation, IRI hosted members from the Bharatiya Janata Party (BJP) for meetings and discussions designed to forge new partnerships between IRI and the party.

During the exchange, IRI and the BJP discussed cooperation in more of the Institute’s programs, such as election observation missions and involving BJP trainers and their party training institute in upcoming work.  Furthermore, the BJP have expressed interest in hosting delegations from other countries on their own, with the goal of continuing the exchange of ideas and broadening the scope of democracy promotion within the region.  IRI plans to further this relationship with India by reaching out to other Indian political parties, at both the national and state level.

A partnership with the BJP builds on IRI’s relationships with other political parties and party-affiliated groups, such as the European People’s Party and the Liberal Party of Australia, as well as various foundations to advance the cause of democracy around the globe.  Engaging India has long been a priority given its role as the world’s largest democracy and its history as a stable and thriving democracy that coexists with widespread poverty and substantial religious, cultural and linguistic diversity.  India serves as a powerful and relevant democratic example for many countries, and it is IRI’s hope that India will become an engaged partner who can share its democratic vision with others.

Over the course of four days in Washington, DC, the BJP delegates participated in a number of high-profile meetings and discussions, including with: Congresswoman Ileana Ros-Lehtinen, chair of the House Committee on Foreign Affairs; Congressman Ed Royce, co-chair of the Congressional Caucus on India and Indian Relations; and Frank Wisner, former U.S. Ambassador to India.  The members of the delegation included two members of national parliament, two members of state legislative assemblies, the director of the party’s training institute, the BJP national general secretary and the national secretary.

The delegation also had the opportunity to meet with representatives from the National Security Council and they engaged in a roundtable discussion with IRI staff, academics, think tank experts, State Department officials and representatives from nongovernmental organizations.  Topics of discussion throughout the visit included U.S.-India relations and regional challenges, the BJP agenda and the future of Indian politics, and the current U.S. political landscape.

That India has upheld democracy for decades despite the kind of cultural pluralism that often creates insurmountable divisiveness in other countries throughout Asia is a testament to the country’s commitment to the ideals and principles democratic countries around the world hold dear.  IRI looks forward to building a strong and successful partnership with India into the future.