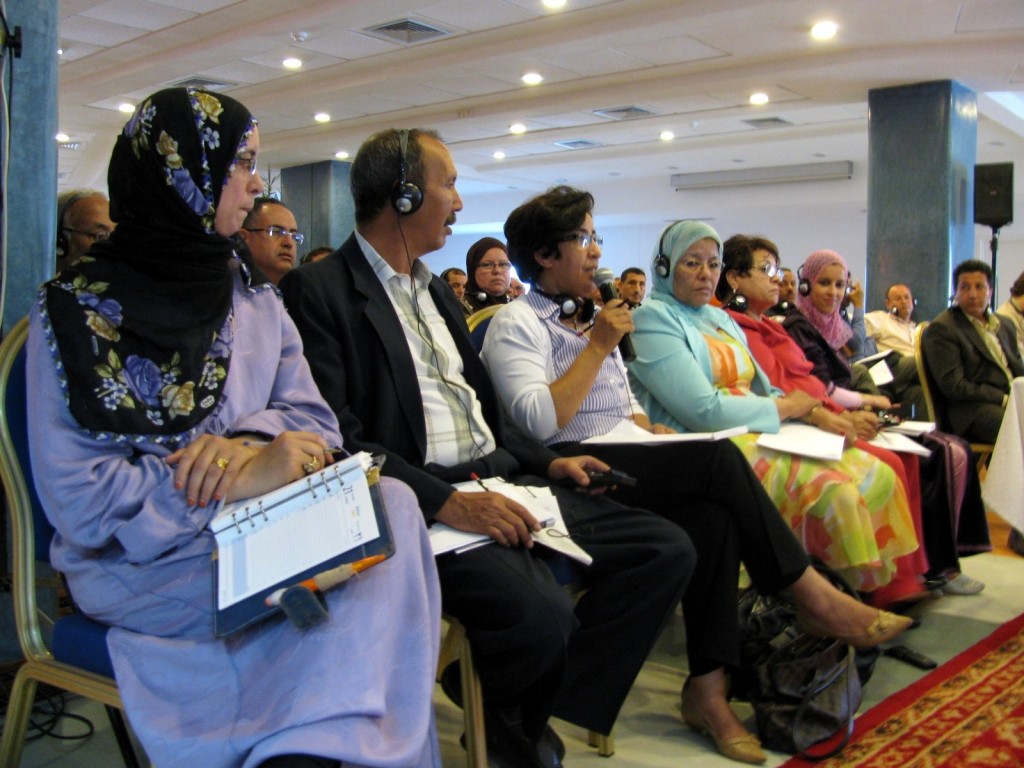 On June 12, 2009, 3,324 women were elected to local councils throughout the Kingdom of Morocco, representing nearly 12 percent of the total seats under contention.  Thanks to an electoral quota system pursued by women’s rights advocates, this percentage dramatically increases the representation of women in elected government, up from roughly .55 percent following the 2003 local elections.  Winning electoral campaigns is likely the easiest hurdle these courageous women will have to scale.  Women elected officials are often seen simply as a rubber stamp for the initiatives of their male colleagues and consigned to only managing issues limited to family, social affairs or health care.  Recent reforms in Morocco aimed to address this issue, have resulted in a momentum for women’s participation in politics that may serve as a positive example for the Arab world.

Although women’s rights in Morocco are guaranteed in the country’s constitution drafted initially in 1962, and supported through the teachings of Islam, cultural traditions have contributed to a much higher illiteracy and poverty rate among women when compared to men.  The Kingdom started tackling this problem in the 1990’s through debate on family law legislation, which was passed by King Mohammed VI in 2004.  The King also passed the nationality code in 2006, allowing women to pass Moroccan nationality to their children.  Additional reforms in the judicial and education sectors are currently being discussed to maintain the momentum of women’s active political participation.  For example, reforms are being made on the communal charter to mandate quotas for the number of women sitting on the councils’ executive boards and advisory bodies.  The King recently stated that the need for women to have a presence within the upper ranks of the Kingdom’s judicial system is paramount, reflecting his sentiment behind these reforms.

The Moroccan government is also actively investing resources in programs that support the implementation of these reforms.  For example, the Ministry of Interior recently launched a local governance program that supports the active participation of women in the political process.  In addition, the Ministry devoted 10 million dirhams ($1,25m) to finance projects of Moroccan political parties and civil society representatives that seek to increase women’s participation.

The International Republican Institute (IRI) is helping maintain the momentum of women’s active political participation by providing trainings and consultations, and also partnered with the Ministry of Interior to train newly elected women local councilors on topics such as coalition building with civil society actors and credible and consistent communication on local legislation.  In addition, the Ministry’s Director of Training, Dr. Najat Zarrouk, was recently selected to participate as a board member on IRI’s  HYPERLINK “https://www.iri.org/countries-and-programs/middle-east-and-north-africa/arab-women-leaders-training-institute” Arab Women’s Leadership Institute (AWLI).   AWLI strengthens the democratic development of women in the Arab region by providing skills, resources, and the network necessary to succeed as elected or appointed officials within civil society and as community leaders.

Positive change is becoming increasingly evident.  Morocco has a special institution of higher learning called the ‘Caid,’ which trains individuals to become leaders in Moroccan politics.  Historically, only men complete the two-year program; over the last three years however, a large number of women were accepted after the government launched a program to increase their participation. The 2009 municipal elections were also a step forward and a sign of a changing political culture in Morocco.

Through ongoing governmental reforms, training programs and resource allocation, women’s equal representation in Moroccan politics can become a reality.  IRI program participant Ms. Malika Chiker of the Party of Authenticity and Modernity was elected to the Hassane Arrondissement in Rabat and is in charge of communicating with different media outlets.  She has found new confidence in her leadership abilities and told IRI staff, “…after town hall meetings organized by the Hassane Arrondissement and IRI where we met with civil society associations, we felt reassured and we are hoping to organize more in the near future.”

Elected women, like Chiker, will need continued support to effectively full-fill their elected responsibilities on important and difficult issues facing Morocco like unemployment, housing and economic growth.  IRI will continue to support all of Morocco’s newly elected officials through consultations, governance workshops, and policy analysis on these issues.