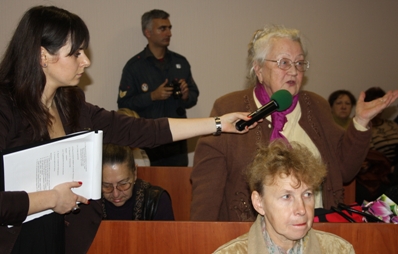 In the Crimean town of Inkerman, fixing an aging sewage treatment plant is now a top priority for Mayor Valery Konoplev and his administration, the result of IRI’s democratic governance work in the region.

For years, citizens had complained about the sewage plant as the source of polluted water in the area, but government officials had been unable or unwilling to address these concerns.  During the fall mayoral campaign the plant was a topic of much discussion and, at IRI sponsored forums, candidate Konoplev promised to address the issue if elected.

Following the election, IRI, and a local citizen initiative known as Peacemaker, began to work with citizens, the mayor and other local officials to establish forums that allowed citizens to participate in the decision-making process.  Through this work, IRI has trained more than 930 citizen activists and elected officials in Crimea, including Mayor Konoplev, on how to plan and conduct public hearings.  At these public hearings, which if held in accordance to Ukrainian law require government officials to address the priorities set, fixing the sewage plant was reaffirmed as the community’s top priority.

At a recent public hearing Peacemaker Chairman Andrei Geftman stated, “We support the process of strengthening links between residents and the Inkerman city council and believe that such a tool as public hearings will be the permanent mechanism to solve local issues.”