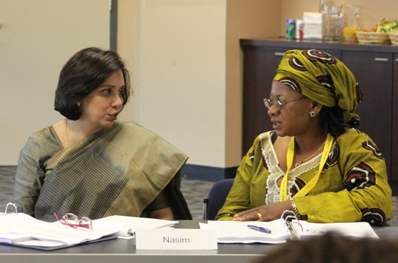 Ambassador Nasim Firdaus has been a strong advocate of women’s empowerment and advancing women’s leadership in Bangladesh.  After retiring from serving for more than 30 years as a civil servant she established the Bangladesh Alliance for Women Leadership (BDAWL) in 2008, to develop the next generation of women leaders in her country. Firdaus’ efforts have become a national movement for change in Bangladesh which recognizes the need for women to work together to support their claim to leadership positions.

With Firdaus spearheading BDAWL, it opened its official Leadership Training Academy in February 2011.  It has trained more than 200 women from a wide range of professional backgrounds in effective leadership skills, developing media relations, public speaking and communication skills, decision making and conflict resolution.  In 2010 BDAWL published the first ever directory of Bangladeshi women leaders, entitled Who’s Who: Women Leaders at a Glance.  The directory highlights 100 women leaders in various spheres of society and government.  BDAWL continues to bring awareness to the plight of women in Bangladesh by hosting conferences where international best practices for enhancing women’s participation in political processes and decision making roles are discussed.

Firdaus has been a pioneer in her career.  She was the country’s first female diplomat in the Foreign Affairs Cadre passing Bangladesh’s first-ever civil service exam in 1977.  As Ambassador, Firdaus held posts in Egypt, Indonesia and Timor-Leste.

Along with others, Firdaus launched the Women’s Democracy Network (WDN) Bangladesh Country Chapter in September 2011.  She is currently leading WDN’s Women’s Leadership School initiative in Bangladesh, which encourages women to pursue active participation in the public sphere and to address barriers that women face in pursuing political leadership positions.  Based on her experience, Firdaus serves as a role model for the Bangladeshi participants and she is committed to increasing the number of women running for office during legislative elections scheduled for 2013.

Firdaus has proven to be an effective leader by focusing on assisting marginalized women in Bangladesh.  In  one of her articles she wrote, “Investment in women’s education, training, and continuous upgrading of skills will need to be accompanied by investments in creating a congenial atmosphere; providing security to girls and women, and enacting enforceable laws that protect women against violence, discrimination, and undue obstacles.  Women on their part must take full cognizance of the state’s effort to take affirmative action for their benefit and must therefore participate fully in the process.  Together we shall win.”

Bangladesh is a country where women have made sizeable gains.  However, millions still remain marginalized and impoverished.  Women face issues of how to provide for their families and ensure health and safety of their children, while human rights, civil rights and political rights remain elusive for many.  Firdaus’ hopes that her commitment to advancing women’s involvement in decision making will allow Bangladesh to move forward.