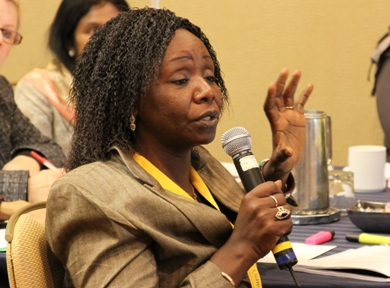 In the community of Kati, Mali, Djingarey Maiga dedicates herself to increasing women’s participation and visibility in local politics and advancing human rights.  For years, Djingarey watched as women in Kati were placed low on candidate lists by political parties and pitted against each other within the party structure.  It was in the 2009 communal elections that Djingarey saw an opportunity to change the political landscape by creating a network of women from all political parties and electing a woman for the first time to the mayor’s council.  With this mission, Djingarey and her organization, Femmes et Droit Humaines (F&DH), set out to make history.

Founded in 2000, F&DH promotes the socioeconomic, civil and political rights of women; and under Djingarey’s guidance, it committed to supporting female candidates in the 2009 communal elections and increasing the number of women in elected office.  Working with the Women’s Democracy Network, Djingarey and F&DH focused on building the capacity of women to effectively campaign for office, equipping women with skills need to govern and promoting gender equality in politics and through legislation.  F&DH also conducted a series of radio panels in which participants spoke about their experiences throughout Kati, the broadcasts reached more than 40,000 people.

As elections drew close, the newly formed network of women from all eight of Kati’s active political parties supported each other as fellow candidates.  This network established a new context in which women candidates communicated and campaigned in an open forum, succeeding in muting political party pressure to work against one another.

“The success of the program can be seen through the women’s confidence as candidates who came together to seek communal advancement and help one another press forward in politics,” said Djingarey.

Political parties took notice of F&DH’s programming and responded by placing the trained participants as high as second on candidate lists.  On Election Day, a record of more than 100 women stood as candidates and for the first time in the commune’s history, a woman was elected to a position on the mayor’s council.

Djingarey viewed this success as a turning point for women as leaders in Kati, “This program brought about an invaluable change in election trends in favor of women in our commune.  A change that is not easy for words to express or for a report to detail, as it deals with changes in human perception and change of paradigm of the foundation of democracy here.”

In 2010, Djingarey launched an initiative to take F&DH’s successes to a regional level by building a West African network to promote regular, transparent, free and fair elections and the effective participation of women in democratic development.  Djingarey has connected with leaders and women parliamentarians from Mali, Burkina, Niger, Senegal, Conakry Guinea, Nigeria and Gambia and is overseeing this nascent organization as it seeks to bring women’s empowerment to all the women of Africa.