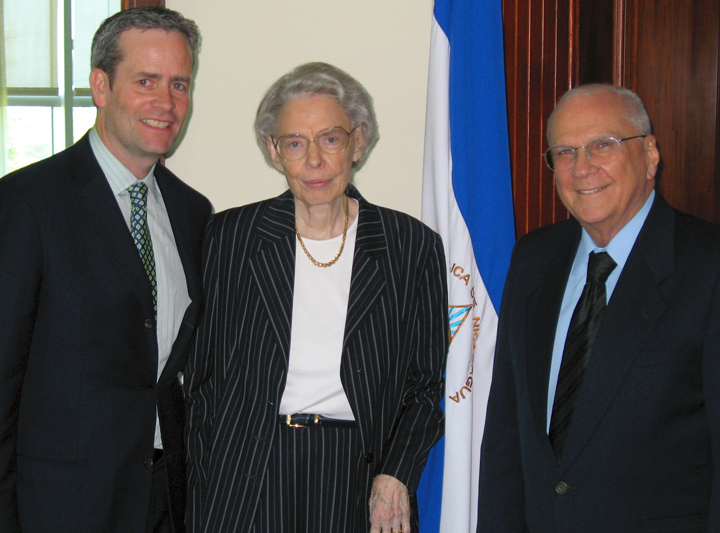 Dr. Jeane J. Kirkpatrick, former U.S. Ambassador to the United Nations and member of the Board of Director of the International Republican Institute (IRI) led an IRI delegation to Nicaragua in early March to observe, first-hand, the current state of Nicaraguan politics, before the November 2006 presidential and legislative elections.  The delegation included fellow IRI Vice Chairman Mr. Peter Madigan, IRI President Lorne Craner and IRI Regional Director for Latin America and the Caribbean Brian Dean.

Kirkpatrick met with Nicaraguan President Enrique Bolaños who expressed his support for her exploratory mission to Nicaragua.  Dr. Kirkpatrick stated that the United States would support the candidate who won in the November elections as long as the elections were free, fair and transparent – a theme she repeated throughout her trip.

The Nicaraguan Resistance Party (PRN), comprised primarily of ex-Contras, honored Dr. Kirkpatrick for her role in supporting the democracy in Nicaragua while she was Ambassador to the United Nations.  She used the opportunity to remind those that the future of Nicaraguan democracy was dependent on not reverting to old ways and dictatorship.

In addition, Dr. Kirkpatrick took time to meet with civil society leaders, the executive board of IRI subgrantee Movimiento por Nicaragua (MpN), women political leaders and opinion makers, and the youth oriented Juventud de Nicaragua (JUDENIC) which is currently working to raise awareness among youth in Nicaragua of the importance of voting and participating in the political process.