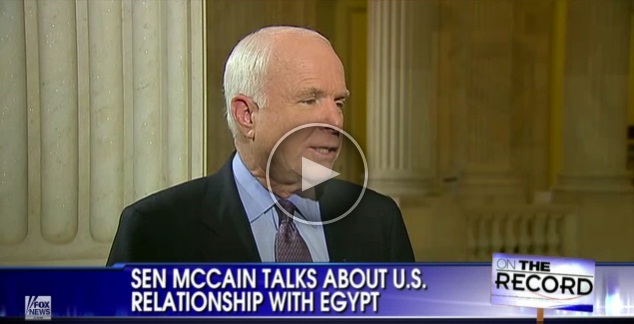 SENATOR JOHN MCCAIN: I’m not sure the word “snubbed” is right, but they canceled a meeting. And I think it’s because they realized that the situation has now reached a crisis level.

Egypt is important to us. Egypt is the heart of the Arab — and cultural and every — historical center of the Arab world. And this crisis we’re in is not in our interests or theirs. But our first responsibility is to our U.S. citizens. These people that work with these, quote, “NGOs” — National Democratic Institute, the International Republican Institute, National Endowment for Democracy, Freedom House — they do good. They go in and they tell people how you can run a campaign, how elections are held, how you have a constitution. They’re just basically mechanics. They’re not — they’re not…

VAN SUSTEREN: They’re going to be tried. So had you met with the generals, what you would have told the generals?

MCCAIN: I would have told them that there’s $1.3 billion in U.S. aid, military aid, that is in jeopardy here. And they need to get their act together. Now, I was in Munich over the weekend. Their foreign minister said, Well, it’s matter for the judiciary. Well, it may be a matter for the judiciary, but in the minds of the American people, this is an issue which, frankly, is not tolerable. And I hope that they will reverse their position very quickly and defuse what can be a very serious rift in U.S.- Egypt relations.

VAN SUSTEREN: Well, as a coincidence, you’re going to Egypt in the next 10 days or so. Is this something you’re going take up with them? And what if our Americans aren’t free to leave by then?

MCCAIN: Well, I hope that I don’t have to take it up. I hope it’s resolved by then. But if so, obviously, we will tell them that what the American Congress and the administration feels. Obviously, the members of Congress are very upset about it, and they have every right to be.

You know, I’ve been over to Egypt so many times. I’ve known these military leaders. I’ve known the field marshal and others, and I frankly do not understand how they would let this situation literally lurch out of control, which it is today.

MCCAIN: I think pretty well. I think that I might have been a little more forceful than they have been, but I think they’re working hard. I really think they’re working on hard on behalf of those 19 Americans, and the entire idea that these people should be arrested or prosecuted for what is clearly furthering democracy. They should be glad that they’re there, to be honest with you.