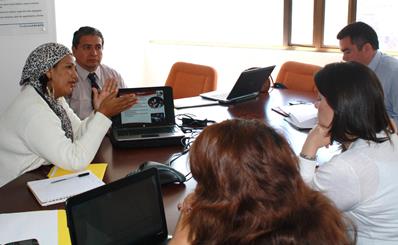 In developing democracies throughout the world, elected leaders often come to office with a limited repertoire of domestic and international models of effective democratic governance.  In order to address this challenge, Mayor Sonia Rivera of San Benito, Guatemala, and three of her staff members traveled to Bogotá, Cartagena, Medellín and Soacha in Colombia to learn from successful programs implemented to strengthen democratic governance.  The trip was a part of IRI’s Rising Stars initiative.

During their week-long visit, Rivera and her staff met with local government officials, civil society organizations and private organizations to learn about their respective efforts to increase civic participation and government responsiveness to citizen needs.  Rivera underscored the importance of these exchanges saying, “[I]t is a once in a lifetime experience which will allow me to learn new ideas and share knowledge, with the ultimate purpose of providing benefits to the municipality of San Benito.”

The delegation visited the city of Soacha, just outside of Bogotá, where they met with representatives from both the public and private sector working to engage citizens around municipal budgeting and spending as well as public decision making.  Rivera also visited the offices of Fundación Corona to learn about the social development project Cómo Vamos, or How are We Doing, which monitors changes in the quality of life in cities and local governments’ compliance with municipal or district level development plans.  The program tracks progress against a set of quality of life indicators through an annual public perception survey.

While in Soacha, the team met the coordinator of the Salon de la Transparencia, or Office of Transparency, a permanent space for citizensto initiate and track  inquiries about government services.  Although Rivera currently holds periodic “Mayor in Your Neighborhood” events to solicit citizen feedback and answer questions, a permanent space in the municipal building would allow citizens to routinely and easily obtain government service information.

Strengthening San Benito’s citizen security efforts by taking advantage of technology is one of the mayor’s priorities, leading the team to meet with Distriseguridad, a Cartagena-based initiative that advances citizen engagement in public safety.  Working in partnership with local police, Cartagena and Distriseguridad installed a citizen security system whereby alarms are placed around the city based on a law enforcement assessment of areas prone to crime.  These alarms are networked to central panels managed by community council memebrs who verify the emergencies before transmitting an alert to the police.  The police are then required to respond based on the overarching agreement supporting the project.  Early success of the project has led to demand for expanding the areas where alarms are placed.

Rivera reiterated her commitment to incorporating ideas learned from the Rising Stars visit and plans to delegate a municipal staff member responsible for implementing, monitoring and evaluating new practices.  Among the practices she hopes to adapt are: mechanisms for including citizens in the municipal budgeting process, creation of a permanent space for citizen inquiries, community cooperation with police around citizen security and a perception survey to track improvements around quality of life.

Launched in 2007, IRI’s Rising Stars initiative equips leaders of new democracies with skills in effective democratic governance.  Through such efforts, IRI and its local partners are cultivating a global network of tomorrow’s democratically-minded leaders.