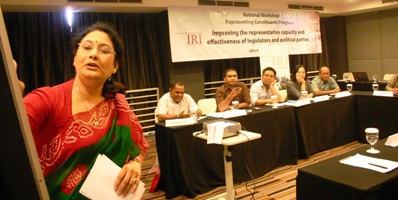 “I listened to the needs of my constituents through various forums and worked over two years to bring a basic health services center to our district.  Upon opening, the center serviced 38 of my constituents on the first day.  Listening and then delivering is the basic responsibility of a legislator,” explained Chang Wendryanto, a long-time district legislator representing Yogyakarta City, during IRI’s democratic governance conference.  Wendryanto, along with other members of Indonesia’s district, provincial and national legislatures and their respective political parties gathered in Jakarta July 20-21 to share ideas about constituent services, best practices and lessons learned in an effort to improve the performance of Indonesia’s legislators and political parties.

Adding an international perspective to constituent service, Kiran Maheshwari, General Secretary of the Bharatiya Janata Party, India’s major opposition party, delivered a keynote address for the event.  “Working for the people is how you move your country forward.  Working for yourself is how you fail to move your country forward,” stated Maheshwari during a session in which she touched on lessons learned from her experience as a mayor, state legislator and national member of parliament.

During the conference, attendees discussed constituent outreach from the district level, the provincial legislature, as well as representatives from the national legislature and national political party leadership boards.  With its national reach, the conference served as a venue for district-level legislators from Bali, Maluku and Yogyakarta to showcase their constituent outreach experiences and success stories with Jakarta-based national legislators, national party leaders and provincial councilors.

With funding from the National Endowment for Democracy, IRI works with district-level legislators and political parties in Maluku, Bali and Yogyakarta to improve constituent outreach practices at the local level, based on issues of local importance.  IRI’s support helps identify and share best practices among district-level legislators to improve constituent service throughout Indonesia.