Iraqi Religious Scholars Discuss the Role of Religion in a Democracy 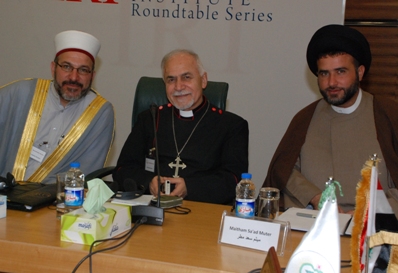 November has seen an increase in violence against religious minorities in Iraq, and the November 1 attack on a Catholic church in Baghdad killing 52 people ranked as the worst attack on Christians since 2003.  With this violence as a backdrop IRI and the Hudson Institute, a Washington, DC-based think tank, hosted a roundtable of government officials and scholars from Iraq’s major religious groups to discuss the role that religion should play in Iraq’s democracy.

Participants began the debate by presenting papers on the history of religion and politics in Iraq, which provided a framework for the rest of the roundtable discussion.  Sunni, Shia and Christian Orthodox panelists all generally agreed that religious leaders should play educational and spiritual roles in their communities and avoid becoming tools for propaganda by extremists.

A strong sentiment emerged among participants that Iraq’s democracy cannot be expected to fully achieve the secularism of the United States or Europe, and that Iraq’s culture and history will dictate a different path to democracy.  Participants looked at ways in which various churches were active in the early days of America’s republic.

In the second day of the conference participants focused on reforms that could be undertaken by the Iraqi government to improve the interaction of religious and governmental institutions.  Sunni and Shia panelists represented their respective national religious endowments and came together to agree on a signed statement on the future of Iraq’s democracy.  Unanimously agreeing that violence in the name of religion is inexcusable, the representatives negotiated a signed statement decrying religious bloodshed, calling for religious reform, and also seeking support for Iraq’s poor.

As a result of IRI’s roundtable discussion, one of the Shia religious scholars issued a religious decree, condemning terrorism and sectarian violence, and the Sunni national endowment detailed its participation in the event during an episode of its nationally-broadcast television show.