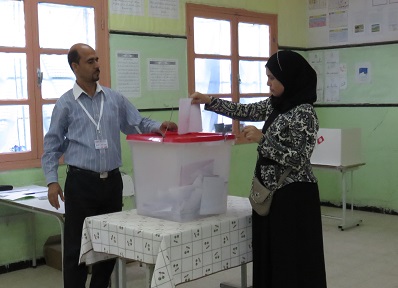 Washington, DC – IRI today announced its delegation to observe Tunisia’s November 23, 2014 presidential election.  Leading the delegation will be Jim Kolbe, former U.S. Congressman (AZ-8) who serves as vice chair of IRI’s Board of Directors and is a senior transatlantic fellow for the German Marshall Fund of the United States; Marta González Vázquez, a member of Parliament for La Coruna, Spain; and Judy Van Rest, executive vice president of IRI.

Delegates will travel to Tunisia to monitor voting and ballot counting throughout the country.  Following the voting, IRI will issue a statement on the findings of the delegation.  This delegation follows IRI’s observation of Tunisia’s October 26 parliamentary elections, which found those elections to be “credible, transparent and allowed for genuine political competition among political stakeholders.”

Other delegates who will observe the election are:

In addition to observers in Tunisia, IRI will also have delegates in England, France, Germany and the United States to witness voting of Tunisian citizens living overseas who have representatives in the country’s parliament.

Scott Mastic, director of IRI’s Middle East and North Africa programs, will also assist in the mission.  IRI’s long-term observers, who have been in Tunisia since August, 2014 and have been monitoring the pre-electoral environment and election preparations, will also serve as observers on Election Day.

As with the October 26 parliamentary elections, delegates will be briefed by political party representatives and Tunisian election officials.  They will also be briefed on the rights and responsibilities of international observers and Tunisian election law and will then deploy throughout the country where they will observe polling stations and identify and evaluate strengths and weaknesses in Tunisia’s election system, including campaign regulations, the balloting process, vote tabulation and reporting.

Past IRI Reports on this Election Cycle in Tunisia: