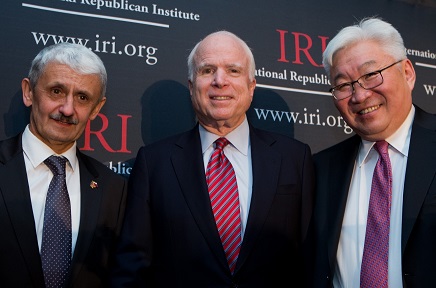 Opening with moment of silence honoring Ambassador Richard S. Williamson, vice chairman of IRI’s Board of Directors, who passed away Sunday, December 8, IRI kicked-off a year-long celebration of its 30th anniversary with a dinner featuring Mikuláš Dzurinda, a member of the Slovak Parliament and Prime Minister from 1998-2006; and Erdeniin Bat-Üül, a leader of Mongolia’s democratic revolution and current Mayor of Ulaanbaatar.

Thanking IRI for supporting their countries’ democratic development Dzurinda and Bat-Üül spoke about the progress their countries have made and the impact of the Institute.

Recalling the struggles of Slovakia in the 1990s, Dzurinda highlighted the reforms the country was able to make and the economic success Slovakia has become.  He shared his personal story of how, after listening to speeches of President Ronald Reagan, even though he didn’t understand English, as a young man he dreamed of an American president visiting his country.  A dream that was realized when then-Prime Minister Dzurinda welcomed President George W. Bush to Slovakia in February 2005.

Noting the challenges Mongolia faced given its location between Russia and China, Bat-Üül discussed his country’s successful and peaceful democratic transition.  He praised the role of the United States, specifically then-Secretary of State James Baker, and IRI for their immediate support of Mongolia.  Recalling the lessons Mongolians learned in the early years of its transition, Bat-Üül stated, “It was about politicians taking orders from their constituencies, not constituencies taking orders from politicians.”

Lorne W. Craner, who will be stepping down as IRI president, was also honored for his years of service and accomplishments.  In his remarks, Senator John McCain, IRI’s chairman, praised Craner for his service stating, “As you move on from the presidency of this institution we all love so much, you can be so confident in the knowledge that IRI is stronger, more relevant and more capable thanks to you.”

Dzurinda served as Prime Minister of Slovakia from 1998-2006 and under his leadership, Slovakia experienced significant economic growth and joined the European Union and the North Atlantic Treaty Organization.  He entered politics as one of the founding members of the Christian Democratic Movement, which competed in the first democratic elections in Slovakia in 1990.  During the 1990s he served as Deputy Minister of Transportation and Posts, was elected to the National Assembly of the Slovak Republic and served as Minister of Transportation, Posts and Public Works.  In 1998 his Slovak Democratic Coalition won the elections and he was named Prime Minister.  He was elected Prime Minister again in 2002 under the Slovak Democratic and Christian Union-Democratic Party (SDKÚ-DS).  In 2010 he was named Foreign Minister, a post he held until 2012.  Dzurinda currently serves as a Member of Parliament for the SDKÚ-DS and serves on the foreign affairs committee.

A leader in Mongolia’s democratic movement, Bat-Üül helped to organize the group that would be the first to speak out against the ruling Mongolian People’s Revolutionary Party in December 1989.  Arrested, along with other members of the group, Bat-Üül became one of the leaders of the country’s 1990 democratic revolution.  He served as chairman of the Democratic Party from 1990-1992, and as general secretary from 1992-1996.  He was elected into the People’s Great Hural in 1990 and into the State Great Hural in 1996, 2004 and 2008.  In August 2012 he was appointed Mayor of Ulaanbaatar by its City Council.  Bat-Üül has been awarded the title of Hero of Mongolia on the occasion of the 20th anniversary of the Democratic Revolution in 2009 for devoting his life to promoting and strengthening democracy in Mongolia.