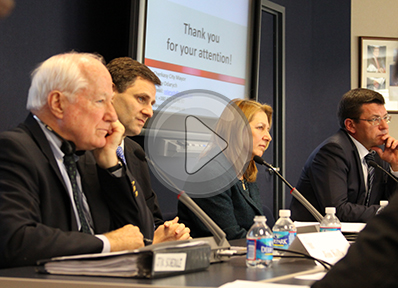 IRI recently hosted Sergiy Odarych, mayor of Cherkasy, Ukraine for a forum that looked at the national challenges to democratic governance and the successes seen at the municipal level.  The event was the 5th installment of IRI’s Democratic Governance Speaker Series, a public forum that brings together policymakers, practitioners and stakeholders to discuss and share experiences in addressing contemporary challenges to governance.

The discussion was moderated by Jim Kolbe, a member of IRI’s Board of Directors, former U.S. Congressman from Arizona and current Senior Transatlantic Fellow for the German Marshall Fund of the United States, who set the stage by commenting on the recent parliamentary elections in Ukraine and the current state of democracy in the region.  Paul Saunders, Executive Director of the Center for the National Interest and a member of the Center’s Board of Directors, discussed the importance of the Soviet legacy and how this history of strong centralized governance has affected the process of democratization in Eurasia.  Nadia Diuk, Vice President, Programs for Europe and Eurasia, Africa, Latin America and the Caribbean at the National Endowment for Democracy (NED), focused on the level of democratic governance in Ukraine, and described the new Ukrainian political landscape following the recent parliamentary elections.  Mayor Odarych outlined the reforms he has undertaken as mayor, particularly those relating to providing better government services to citizens, increasing government transparency, and pursuing a more efficient energy policy.

In addition to participating on this panel, Mayor Odarych had the opportunity to share his reforms through a series of meetings on Capitol Hill, at the U.S. Agency for International Development, NED and other public and private entities.  To support his interest in public/private partnerships, public security and public welfare, Mayor Odarych attended meetings with the Assistant Chief of the Montgomery County Police Department, the President of the Northern Virginia Conservation Trust, the Chief Executive Officer of the Georgetown Business Improvement District, and the Public-Private Infrastructure Advisory Facility of the World Bank.

Around the world, the IRI conducts democratic governance programs, working alongside political and government actors, citizens and civil society, to bring government closer to citizens, transforming government into a responsive, transparent and effective institution.  IRI has been active in Eurasia since the fall of the Soviet Union, conducting programs to support the development of democratic political parties, promote democratic governance and strengthen civil society.