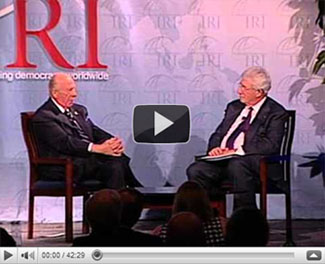 IRI honored former Secretary of State George P. Shultz with its 2010 Freedom Award for his work in establishing the National Endowment for Democracy and his service to the United States.  IRI Chairman Senator John McCain presented the award to Secretary Shultz on October 4 at an event in Washington, DC (view photos from the event).

In presenting the award, IRI Chairman Senator John McCain said of Secretary Shultz, “Of the many glorious causes that he has advanced with his enormous talents, I believe the one where his impact has been the greatest, and the one that endears him most to us at IRI and the one that will ensure his name is forever etched in stone as one of America’s greatest statesmen, is the cause of human liberty − its defense, its sustainment, its advancement.  And one day, many years from now, when freedom has won its ultimate triumph over tyranny and darkness, historians of the future will remember George Shultz and one of the finest authors of that success.”

In accepting the award Secretary Shultz praised IRI for its work and long-term commitment to democracy promotion.  Following the award presentation, Secretary of Shultz and Richard H. Solomon, President of the United States Institute of Peace took part in a conversation discussing economic challenges facing the U.S., nuclear disarmament, the threat of terrorism, the war in Afghanistan and the polarization of U.S. politics.  Secretary Shultz reminded the audience that “the work for freedom never stops.” 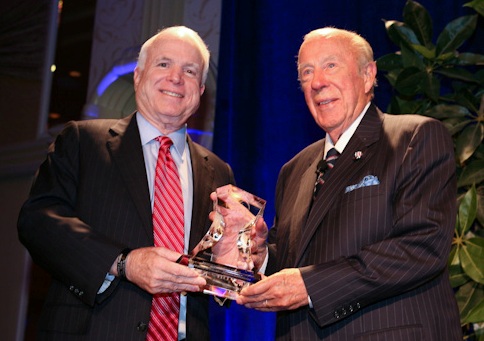 George Pratt Shultz has had a distinguished career in government, academia, and the world of business.  He is one of a handful of individuals who have held four different federal cabinet posts; he has taught at three of this country’s greatest universities; and for eight years he was president of a major engineering and construction company.

Shultz began his service to his country in 1942 when he joined the U.S. Marine Corps after graduating from Princeton University to serve in the Pacific Theater.  After World War II ended, Shultz returned to school and earned his Ph.D. in industrial economics from the Massachusetts Institute of Technology (MIT), where he taught until 1957.  It was during this time that Shultz accepted his first presidential appointment, serving on the President’s Council of Economic Advisers during the administration of President Dwight Eisenhower.

He continued his academic career through the 1960s, serving as professor of industrial relations and then dean at the University of Chicago Graduate School of Business and then as a fellow at the Center for Advanced Study in the Behavioral Sciences at Stanford.

In 1969, President Richard Nixon appointed Shultz Secretary of Labor, a position he held until June 1970 when he was appointed Director of the Office of Management and Budget.  In 1972 he was appointed to his second cabinet post when he became Secretary of the Treasury, serving until 1974.  During this period, Shultz also served as Chairman of the Council on Economic Policy, negotiated a series of trade protocols with the Soviet Union, and represented the United States at the Tokyo meeting on the General Agreement of Tariffs and Trade.

Shultz left government service in 1974 and became President and Director of Bechtel Group and joined the faculty of Stanford University.  In 1981, President Ronald Reagan appointed Shultz Chairman of the President’s Economic Policy Advisory Board, a position he held until July 1982 when he was sworn in as the 16th U.S. Secretary of State.  As Secretary of State, he played a key role in implementing a foreign policy that led to the successful conclusion of the Cold War and the development of strong relationships between the United States and the countries of the Asia-Pacific region including China, Japan and the Association of Southeast Asian Nations.

In June of 1982, President Reagan had proposed fostering “the infrastructure of democracy, the system of a free press, unions, political parties, universities, which allows a people to choose their own way to develop their own culture, to reconcile their own differences through peaceful means.”

As Secretary of State, Shultz was instrumental in seeing President Reagan’s idea become a reality.  In his testimony to the Subcommittee on International Operations of the House Foreign Affairs Committee, Shultz urged Congress to adopt the Democracy Project proposal saying, “The values and principles that Americans of all political persuasions share with many peoples throughout the world will shape the course of events in the future and will ensure that the world evolves in a way that will maximize the chances for peaceful cooperation, freedom, enhancement of human rights, and economic development.”

Over the next six years the world began to see dramatic changes that would lead to the collapse of the Soviet Union, the end of the Cold War, the fall of the Berlin Wall and the spread of democracy across much of Eastern Europe.

Upon leaving office in January 1989, Shultz rejoined the Bechtel Group as Director and Senior Counselor.  He also rejoined Stanford as professor of international economics at the Graduate School of Business and as Distinguished Fellow at the Hoover Institution.  In 2001, Shultz was named the Thomas W. and Susan B. Ford Distinguished Fellow at the Hoover Institution.

In January 1989, Shultz was awarded the Medal of Freedom, the nation’s highest civilian honor.  He is also a recipient of the Seoul Peace Prize (1992), the West Point Sylvanus Thayer Award (1992), the Eisenhower Medal for Leadership and Service (2001), the Reagan Distinguished American Award (2002), and the Association for Diplomatic Studies and Training’s Ralph Bunche Award for Diplomatic Excellence (2002).  Other honors awarded in 2002 include the Elliot Richardson Prize for Excellence and Integrity in Public Service, the James H. Doolittle Award, and the John Witherspoon Medal for Distinguished Statesmanship.  The George Shultz National Foreign Affairs Training Center in Arlington, Virginia, was dedicated in a ceremony on May 29, 2002.  Shultz was named a Distinguished Fellow of the American Economic Association in 2005.  He received the American Spirit Award from the National World War II Museum in 2006.  In 2007, he received the George Marshall Award from the United States Agency for International Development and the Truman Medal for Economic Policy.  He received the Rumford Prize from the American Academy of Arts and Sciences in 2008 and the Commandant’s Leadership Award from the Marine Corps-Law Enforcement Foundation in 2009.

Shultz’s publications include Ideas & Action, Featuring 10 Commandments for Negotiations (2010); Ending Government Bailouts as We Know Them, co-edited with Kenneth E. Scott and John Taylor (2010); Putting Our House in Order: A Citizen’s Guide to Social Security and Health Care Reform, with John B. Shoven (2008); Turmoil and Triumph: My Years as Secretary of State (1993); Economic Policy Beyond the Headlines, with Kenneth Dam (1977); Workers and Wages in the Urban Labor Market, with Albert Rees (1970); Guidelines, Informal Controls, and the Marketplace, with Robert Aliber (1966); Strategies for the Displaced Worker: Confronting Economic Change, with Arnold Weber (1966); Management Organization and the Computer, with Thomas Whisler (Eds.) (1960); Labor Problems: Cases and Readings, with John Coleman (1959); The Dynamics of a Labor Market, with Charles Myers (1951); and Pressures on Wage Decisions (1951).