At a time when democracy and freedom are facing challenges in many parts of the world, IRI took a moment to honor some of freedom’s notable heroes at a ceremony on September 9 in Washington, DC.

Washington, DC – At a time when democracy and freedom are facing challenges in many parts of the world, IRI took a moment to honor some of freedom’s notable heroes at a ceremony on September 9 in Washington, DC.

Emceed by Stephen F. Hayes of The Weekly Standard, the evening began with a tribute to Ambassador Richard S. Williamson, who was a long-time member of IRI’s Board of Directors and served as its vice-chairman from 2011 until his death in 2013.  Video tributes were featured from Governor Mitt Romney and former Secretary of State Madeleine Albright. 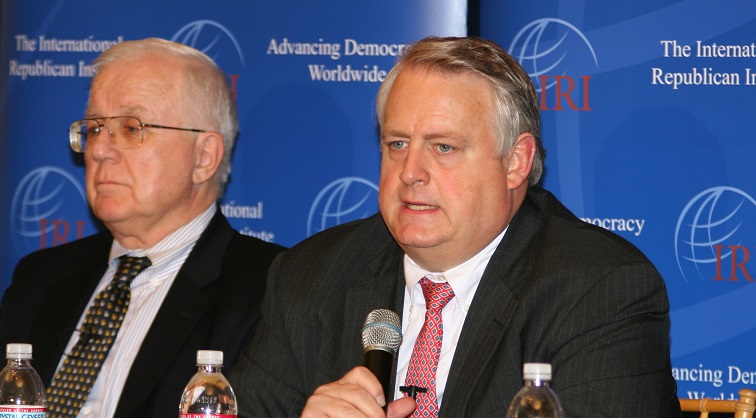 Senator John McCain, chairman of IRI’s Board of Directors also paid tribute to Williamson and announced the creation of the Rich Williamson Women of Peace Initiative in South Sudan and Sudan, through which IRI will support the efforts of two women’s organizations to promote peace and reconciliation in both countries, using money that was donated to the Institute in Rich’s honor.

“Rich Williamson was a dear friend who devoted his life to public service and advancing human rights around the world,” said Senator McCain.  “Through the Rich Williamson Women of Peace Initiative in South Sudan and Sudan, IRI will carry on Rich’s remarkable legacy.” 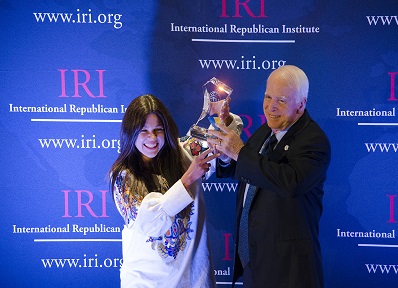 Honored with IRI’s 2014 Freedom Award was one of the year’s most compelling stories, Ukraine’s Maidan Movement, which was accepted on behalf of the Ukrainian people by the famous Ukrainian pop star Ruslana, who is seen by many as the face of the Maidan Movement and who stood with protestors throughout the winter, performing and motivating crowds.

“Throughout the winter of 2013 and 2014, the world once again watched as the people of Ukraine turned out into the streets demanding an end to government corruption, an end to the regime’s abuse of power and an end to human rights violations.  Very simply, they wanted a chance to shape their own democratic future,” said Ambassador Mark Green, president of IRI.  “For their courage and inspiration, we are proud to honor them with our 2014 Freedom Award.” 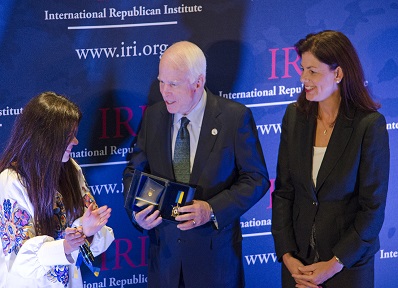 In a surprise for Senator McCain, Senator Kelly Ayotte, presented McCain with the Order of the Defense of the Euromaidan on behalf of Vatalii Yarema, general prosecutor of Ukraine, for “his support and contribution to the people of Ukraine during the fight for democracy, freedom and human rights.”

“When I led IRI’s election observation mission to Ukraine in May, I heard from Ukraine’s leaders how much they value and want American support.  There has been no stronger leader for Ukraine in its fight against Russian aggression and in its right to choose its own future than Senator McCain,” said Senator Ayotte.  “He has been a leading voice in urging our government to offer more support to the Ukrainian people, and I can think of no one more deserving of this recognition.” 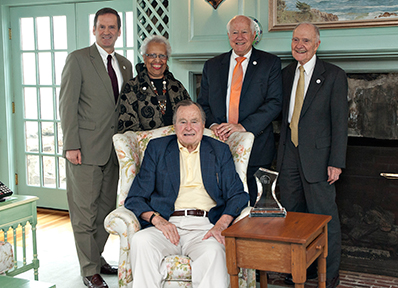 The culmination of the evening was a tribute to President George H.W. Bush, who was formally presented IRI’s 2014 Freedom Award on May 19 at a ceremony at his home in Kennebunkport, Maine by members of IRI’s Board of Directors and Ambassador Green.  Brent Scowcroft, who serves on IRI’s Board of Directors and served as national security advisor to President Bush, and Sam LeBlond, President Bush’s grandson, offered their thoughts on the President at the celebration.

“President Bush is among the finest public servants America has produced,” said Senator McCain.  “Throughout his remarkable career in service to our nation – from his time as the youngest Naval aviator in World War II, to virtually every key national security position and on to the White House – President Bush advanced our nation’s values and interests with dignity and patriotism.”

Established in 1995, the Freedom Award honors individuals who have worked to advance freedom and democracy around the world.  The contribution of these individuals has given hope to millions of people and has helped improve the lives of people around the globe.

President George H.W. Bush
George Bush was sworn in as the 41st president of the United States in January 1989 and served until January 1993.  During his term in office, the Cold War ended; the threat of nuclear war was drastically reduced; the Soviet Union ceased to exist; the Berlin Wall fell and Germany was reunified, and he put together an unprecedented coalition of 32 nations to liberate Kuwait after it was invaded by Iraq.

President Bush was the first sitting vice president to ascend to the presidency since 1837, and only the second American president to serve a full term without party control in either chamber of Congress.

George Bush became a decorated naval pilot who flew torpedo bombers during World War II.  In 1944, he was shot down over the island of Chi Chi Jima and rescued.  After graduating Phi Beta Kappa from Yale University in 1948 with a degree in economics, he and his wife Barbara moved to Texas, where he began making his way in the oil business.

He was elected in 1966 to the U.S. House of Representatives from Texas’ seventh district and served two terms.  Before serving as vice president from 1981 to 1989 under Ronald Reagan, President Bush held a number of senior-level positions, including U.S. ambassador to the United Nations, chairman of the Republican National Committee, chief of the U.S. liaison office in China and director of Central Intelligence.

Ukraine’s Maidan Movement
For the second time in 10 years, the Ukrainian people have proven their commitment to building democracy in their country.  As they did during the inspiring 2004 Orange Revolution, this past winter thousands of men and women went to the central square, or Maidan, of their towns and cities to protest President Viktor Yanukovych’s broken promise to undertake the steps for Ukraine to enter into the European Union.  When the regime reacted to this peaceful protest with deadly violence and widespread arrests, resistance grew and spread throughout Ukraine.  No longer concerned only with a broken presidential promise, bloodied citizens also sought an end to widespread government corruption, an end to the appalling abuse of power and an end to human rights violations.  In the face of their determination and dedication, Yanukovych fled from the men and women of the Maidan, abandoning the country for Russia.

Richard S. Williamson
A long-time member of IRI’s Board of Directors, Rich Williamson was committed to spreading democracy.  He first joined IRI’s board in 1990 and served until 2001 when he joined the administration of President George W. Bush.  He re-joined IRI’s board in 2004, becoming vice-chair in 2011.  During his time in public service, he held numerous foreign policy positions serving three U.S. presidents.  In the Reagan and George H.W. Bush administrations, he was assistant to the president for intergovernmental affairs (1981-1983), U.S. ambassador to the United Nations office in Vienna (1983-1985), assistant secretary of state for international organization affairs (1988-1989) and a member of the President’s General Advisory Committee on Arms Control (1988-1992).  Williamson returned to the United Nations as U.S. ambassador and alternate representative for special political affairs (2002-2003), and was ambassador and representative to the U.N. Commission on Human Rights (2004).  In 2008 he was named special envoy to Sudan by President George W. Bush, a position he held until January 2009.