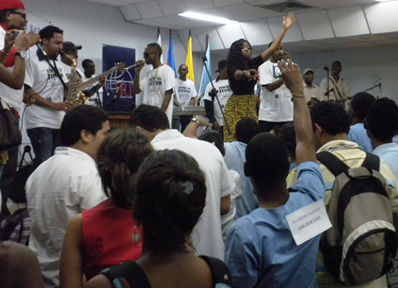 To an Afro-Colombian rhythm, Colombian pop singers, including Chocquibtown and Junior Jein, performed a popular local song “Meté la Mano, Sacá y Huelé,” at the launch of Mete la Mano, a campaign to inspire Afro-Colombians and internally displaced people to get involved in the 2010 presidential election and 2011 local and regional elections.  The launch, held at Santiago University of Cali, included speakers from civil society and performances by popular Colombian musicians.  The university students were encouraged to get involved in the political process of their country.

Meté la Mano, which means to take part or to participate in something, involves more than 300 university students and faculty, community leaders, media representatives and public officials.  The campaign uses multimedia outreach to get Afro-Colombians and displaced peoples involved in the political process, creating greater awareness of issues affecting their communities and demand for political accountability and transparency.

The campaign implements a series of workshops for civil society leaders in target municipalities in the departments of Valle del Cauca, Cauca and Nariño, and focuses on civic responsibility and voter participation through a multimedia outreach campaign.

The campaign was launched in February by IRI in partnership with Santiago University of Cali, the National Conference of Afro-Colombian Organizations and the Association of Internally Displaced Afro-Colombians.