IRI Statement on the Death of Ambassador Richard S. Williamson 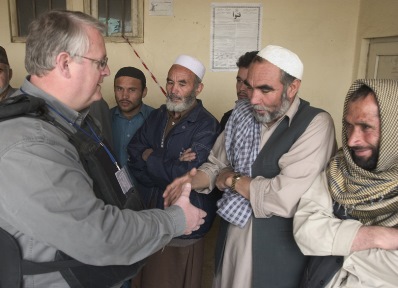 Washington, DC – “Tragically and unexpectedly, Ambassador Richard S. Williamson died on Sunday evening, December 8, 2013, from complications from a cerebral hemorrhage.  We were shocked and saddened to learn of the passing of our friend and mentor.  Ambassador Williamson joined the Board of Directors of IRI in 1990 and was a stalwart voice for the advancement of democracy throughout his career.

“Recognized for his expertise in foreign policy, Ambassador Williamson held numerous positions serving three U.S. presidents.  In the Reagan and George H.W. Bush administrations, he was Assistant to the President for Intergovernmental Affairs (1981-1983), U.S. Ambassador to the United Nations Office in Vienna, Austria (1983-1985), Assistant Secretary of State for International Organization Affairs (1988-1989) and a member of the President’s General Advisory Committee on Arms Control (1988-1992).  He returned to the United Nations as U.S. Ambassador and Alternate Representative for Special Political Affairs (2002-2003), and was Ambassador and Representative to the U.N. Commission on Human Rights (2004).  In 2008 President George W. Bush named him Special Envoy to Sudan, a position he held until January 2009.

“At IRI we will most miss him for his support of our work around the word and for his advice and counsel in carrying out our mission.  He traveled extensively with IRI, leading election observation missions, meeting with activists trying to build a better future for their countries, and encouraging staff.  His commitment will be missed.

“Our thoughts and prayers go out to Ambassador Williamson’s family and friends.”

For those wishing to make donations to IRI in Ambassador Williamson’s honor, click on the button below and in the Dedication or Gift box type in Ambassador Rich Williamson.