IRI will send an international delegation to observe the parliamentary elections in Ukraine on October 26, 2014. Delegates will monitor voting and ballot counting at various locations throughout the country, issuing a preliminary statement on their findings after the vote. 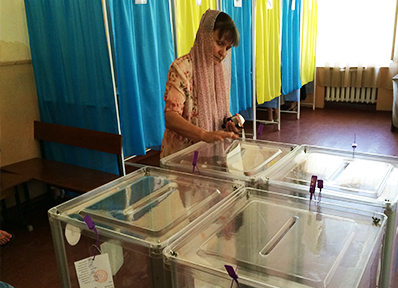 Washington, DC – IRI today announced it will send an international delegation to observe Ukraine’s October 26, 2014 parliamentary elections. These elections will see the country choose a new, post-Yanukovych parliament, and are an opportunity for the country to consolidate its democratic gains.

Delegates will travel to Ukraine to monitor voting and ballot counting throughout the country.  Following the voting, IRI will issue a preliminary statement on the findings of the delegation.

IRI’s observation of the May 25, 2014 presidential election, led by U.S. Senator Kelly Ayotte, found that, “Ukrainians in large numbers went to the polls to elect a new president and move their country past the corrupt and unpopular regime of Viktor Yanukovych.  Despite foreign-inspired violence in the east and attempts in a few places to prevent the election from taking place, Ukraine has chosen a path of democracy and elected their new president in the first round.”

Prior to the election, delegates will be briefed by political party representatives and Ukrainian election officials.  They will also be briefed on the rights and responsibilities of international observers and Ukrainian election law.  Delegates will then be deployed throughout the country where they will observe polling stations and identify and evaluate strengths and weaknesses in Ukraine’s election system, including campaign regulations, the balloting process, vote tabulation and reporting.