Ukrainians oppose Russian aggression in eastern Ukraine, according to a new poll released by IRI. Other findings show a clear support for the government in Kyiv and high voter enthusiasm for the upcoming parliamentary elections.

Kyiv, Ukraine – According to a new Ukraine poll released today by IRI, Ukrainians overwhelmingly oppose Russian aggression in eastern Ukraine.  The poll also shows strong support for the Kyiv government as the country prepares for parliamentary elections on October 26.

Despite continued claims to the contrary from Moscow and pro-Russian separatists, 89 percent of respondents oppose Russia sending troops to protect Russian-speaking citizens.

The opposition to Russia’s actions is seen across all regions – 78 percent in the east, 89 percent in the south, 93 percent in central Ukraine and 99 percent in the west.  It also transcends language.  Seventy-nine percent of Russian speakers and 95 percent of Ukrainian speakers oppose the Russian actions.  IRI noted that this was the first national poll in some time to include respondents from Donetsk and Luhansk oblasts (states). 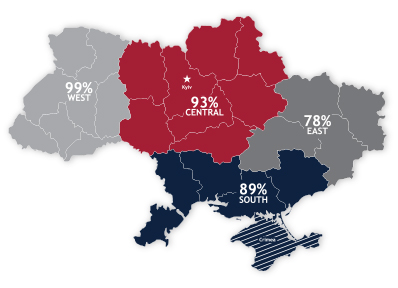 The poll also shows that Ukrainians continue to support an undivided Ukraine.  An overwhelming majority (80 percent) would like Ukraine to remain a unitary country.  Only two percent of Ukrainians would like to see Ukraine divided into several countries.

Despite continuing concerns over the crisis in eastern Ukraine, a majority of Ukrainians voiced their support for the central government in Kyiv, with 55 percent of Ukrainians approving of the job that President Poroshenko is doing and 35 percent disapproving.

Support for President Poroshenko’s policy of joining the European Union also increased from 53 percent in April 2014 to 59 percent, representing another indication of support for the Poroshenko government.  On the other hand, support for membership in President Putin’s Customs Union dropped from 24 percent to 17 percent during that same time. Finally, a large majority (66 percent) of Ukrainians have a negative view of Russia.

Some observers believe that President Poroshenko has been hindered by having to work with a parliament elected under his predecessor, Viktor Yanukovych.  The current parliament, elected in 2012 under former President Yanukovych, registered a 15 percent approval in the IRI poll.  “It reinforces the timeliness and importance of the upcoming parliamentary elections scheduled for October 26,” according to IRI president Mark Green, who also noted that “the approval rating of parliament has declined sharply in this poll.”

Despite the ongoing violence and instability in eastern Ukraine, voter enthusiasm for the October 26 parliamentary elections is high, with an overwhelming 73 percent of respondents reporting they either will vote or are likely to vote.  Although enthusiasm for the parliamentary elections is highest in the west (91 percent) and center (82 percent), a majority in all regions say they either will or are likely to vote, with 55 percent in the east and 62 percent in the south.

Green said, “The new poll suggests that chances are good that President Poroshenko will gain a solid working majority as a result of the elections.”

The poll was conducted in all regions of Ukraine (including Donetsk and Luhansk oblasts) from September 12-25, 2014 with a randomly selected sample of 1,200 permanent residents of Ukraine aged 18 and older and eligible to vote.  The margin of error does not exceed plus or minus 2.8 percent, and the response rate was 63 percent.

The survey was conducted by Baltic Surveys/The Gallup Organization, with field work carried out by Rating Group Ukraine.  The survey was funded by the U.S. Agency for International Development.