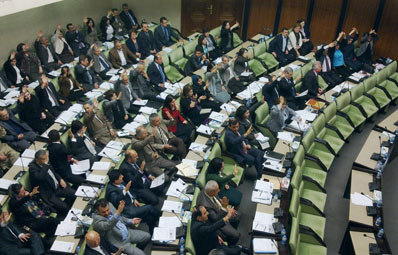 Last fall, IRI’s civil society youth partners in Kurdistan launched two new initiatives – an effort to reform the Kurdistan Regional Government (KRG) law governing nongovernmental organizations (NGO) and an effort to advocate for a micro-loan program for youth called the Kurdistan Youth Future Fund (KYFF).  A major success for civil society in Iraq came in April 2011, when both of these initiatives were passed by the KRG parliament.

On April 6, 2011, the KRG parliament  approved the NGO law.  The new law introduced 29 modifications of the existing law, including simplifying the NGO registration process, creating a competitive and transparent funding process and allowing foreign residents in Iraq to participate in NGOs.  Through radio and newspaper advertising, consultations with members of parliament and conferences with civil society organizations, IRI supported the work of the Aynda Center for Youth Issues and a coalition of some 55 civil society groups, in lobbying for the new law.

Also in April, after almost two years of civil society advocacy, the KRG parliament passed the KYFF law, establishing a government-funded loan program which will provide interest-free loans for Kurdistan’s entrepreneurial youth.  The initiative is intended to provide motivated youth with the opportunity to launch their own small business, helping provide needed jobs for unemployed young people and improve the region’s economy.  The law is well timed, as many youth in the Kurdistan region protested throughout the spring in response to high unemployment.

The passage of both laws demonstrates the growing role of civil society in Iraq’s new democracy and the positive effects on governance that can be attained through this important sector of society.
Top