International conferences that gather experts on a single topic are fairly normal in Latin America.  Forums that bring together a range of lawmakers, academics, civil society leaders and journalists, on a range of topics are rare.  But that 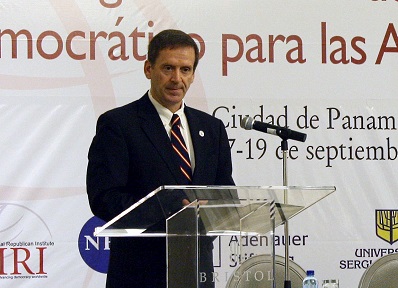 is what the International Republican Institute did last week when it hosted an event in Panama titled “Ensuring a Democratic Future in the Americas.”

Co-sponsored with the National Endowment for Democracy (NED), Germany’s Konrad Adenauer Stiftung, Sergio Arboleda University of Colombia and the City of Panamá, the three-day event attracted participants from 14 countries in the hemisphere.

During the event, participants discussed threats to democracy in the Americas based on experiences throughout the hemisphere.  In recent years, democracy has been challenged in some countries by vulnerabilities such as weak political party organizations and the lack of effective government at the local level where citizens depend on elected officials to inspire confidence.  In other places, autocratic governments restrict freedom of expression, ignore checks and balances and manipulate elections to perpetuate themselves in power. 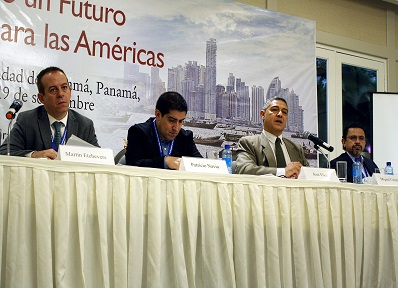 During one panel, Miguel Ceballos, dean of the School of International Relations and Politics at Bogotá’s Sergio Arboleda University observed, “The discussion about democracy in Latin America has cooled off, yet we cannot allow this to occur as the region faces challenges to educate citizens as well as defend and consolidate democracy in our countries.”

Participants from Mexico to Chile exchanged opinions and experiences during working sessions, which afforded an opportunity for them to speak directly with panelists and others regarding the political developments in others’ countries.  Oscar Schiappa Pietra of the Universidad San Martín de Porras of Peru said, “Other participants updated us and we heard first-hand accounts of what was happening in other countries.  It was a great opportunity to learn more about issues at hand rather than relying on news to give us updates.”

Panel discussions were moderated by:

The event was an opportunity for many partners involved in strengthening democracy in Latin America to come together and discuss common challenges.  Following the conference, IRI will work with civil society organizations that attend to help them design projects that generate awareness in their societies to protect democratic institutions and processes.

IRI has programs throughout Latin America and the Caribbean that help build the capacity of legislative bodies, strengthen best practices in municipal government and promote independent media, civil society and citizen participation.