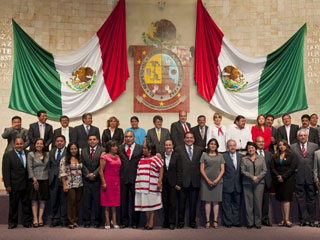 The Oaxaca state constitution had not been modified since 1922, and many of its processes and procedures were on the verge of becoming obsolete. State legislators talked with IRI about the need to update various articles of the constitution to address the challenges currently facing their state. In response, IRI worked with Oaxaca state legislators to host advocacy roundtables, where legislators and other state officials meet with civil society organizations and interested citizens to discuss and address issues of citizen concern. The goal of these discussions, in addition to reforming the constitution, was to increase citizen participation in political affairs and improve communication between citizens and elected leaders.

The roundtables focus on key issues such as: Public safety, violence against women, judicial reform, citizen participation, procedures for a recall vote, referendum and promoting independent candidates in state elections. These roundtables also provide a critical opportunity for citizens to provide ideas and feedback to government officials on their proposed reforms to laws and government processes.

Legislators from the three main political parties, the National Action Party, the Institutional Revolutionary Party and the Party of the Democratic Revolution worked together to use the information gathered from these roundtables to negotiate and draft an extensive reform bill – Reforma de Estado – which was presented to the state legislature and subsequently passed on April 6, 2011.

The final bill amended 44 articles of the constitution and made substantial changes to key issues such as: Granting the governor the power of veto over any law passed by the state legislature, allowing the governor to introduce three pieces of legislation during each legislative session, giving authority to the state legislature to approve the governor´s cabinet selections, and requiring background checks for the governor´s cabinet selections and senior members of the administration. In addition, the new law grants Oaxaca citizens the ability to exercise their right to a referendum or plebiscite, gives the state´s elections institute jurisdiction over citizens’ participation in the electoral process and gives the Attorneys General´s office increased control over its finances and a new organizational structure.

IRI has been active in Mexico since 1997, carrying out programs to strengthen democratic governance and political parties, and fostering the participation of women, indigenous groups and youth in the political process.