Over the past year and a half, the International Republican Institute (IRI) has done positively invaluable work tracking public opinion in Ukraine. I’m not aware of any organization that has commissioned a wider and more in-depth series of polls, polls that have helped quantify some dramatic shifts in Ukrainian attitudes towards, Europe, Russia, NATO, and other topics. You don’t have to agree with the IRI’s institutional views to understand how incredibly important it is to get real data about Ukrainian opinion.

From my perspective, however, the IRI’s latest poll might very well be the most interesting yet published. Why? Because it shows that, beneath the surface of growing public support for ”European integration,” there are some severe and totally unresolved tensions between the requirements of that process and what Ukrainians actually think.

As perhaps the most glaring example, consider Ukrainian attitudes towards privatization. Among experts and regional analysts, privatization is almost universally acknowledged to be a cornerstone of the integration process and as something that Ukraine desperately needs to do. Indeed, in the West privatization genuinely isn’t an issue: you need to go out to the extreme fringes of the left (like the soon to be leader of the labor party Jeremy Corbyn) to find anyone who argues that the state should own more than a small handful of companies. Whether you’re left right or center, almost everyone in the US and Europe agrees that it’s just a really bad idea for the state to actively run companies.

The problem is that the Ukrainian public hasn’t gotten that memo. When asked what they want to happen to Ukraine’s four thousand state-owned enterprises, here’s what Ukrainians said: 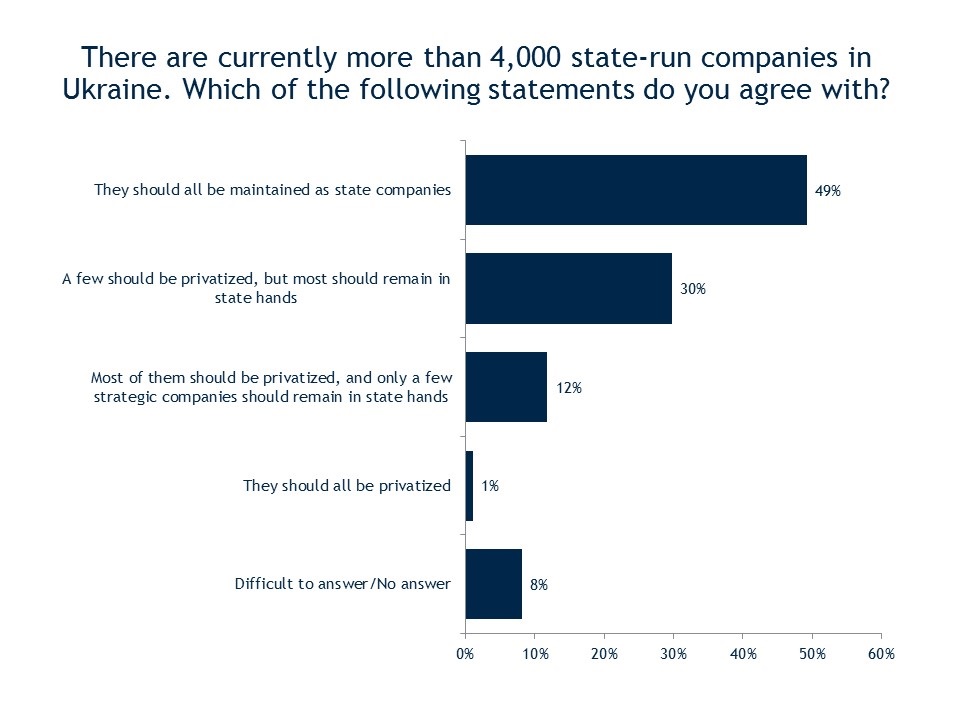 Does that look to you like a country that is ready to embrace liberalizing shock-therapy? Roughly half of the population doesn’t want there to be any liberalization at all! They want the state to continue owning and running a significant chunk of the economy.

Please note that I am not personally supporting or defending this point of view. Speaking personally, it seems clear to me that the state is not a particularly effective steward of commercial enterprises. But I don’t represent the median Ukrainian voter, and it seems worth pointing out that most Ukrainians do not support the supposedly “obvious” choice of privatization.

Now perhaps privatization will get rammed through anyway. The 1990′s provide a very clear historical precedent. Back then, public opinion polls also showed that privatization was broadly unpopular. But the authorities were unmoved, said ”there is no choice,” and implemented mass privatizations anyway despite a huge public outcry. If you consider the enormous damage that an analogous process of privatizations did to public perceptions of democracy in Russia, you might be a bit wary about just where Ukraine will head if the government decides to ignore public opinion and privatize anyway.

In some important ways Ukraine appears to be genuinely coalescing around broadly pro-Western positions. Public support for entering the Russia-led Customs Union, which as recently as September 2012 was as high as 42%, has withered down to a mere 14%. But while public support for the idea of “Europe” is clearly growing, support for the actual policies that would need to be enacted as part of an EU integration process has not.

Perhaps that will change. Maybe a year from now another IRI poll will show that Ukrainians have turned into huge fans of privatization. But as things stand there is surprisingly little enthusiasm for many of the “inevitable” economic reforms that Ukraine needs to make.