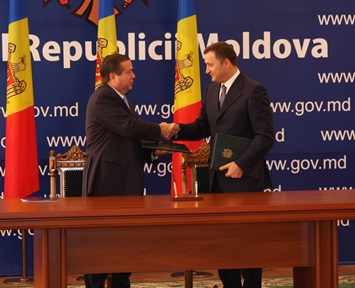 Moldova’s ruling coalition, the Alliance for European Integration, was elected in July 2009 on a platform to carryout democratic reforms, eliminate excessive bureaucracy, reduce corruption in government bodies and provide citizens with better public services.  To help the government fulfill these campaign promises, IRI signed a memorandum of understanding to assist the government in improving the quality of public services and promoting greater transparency in government activities.  Prime Minister Vlad Filat and IRI’s Eurasia Director Stephen Nix signed the memorandum on September 27.

Under the agreement, IRI will assist the Moldovan government in its launch of a pilot program to train public servants in the customs offices to better manage and understand their responsibilities and improve their customer service skills.  Measures to reduce corruption in the customs offices will also be implemented, with the goal of reducing incidences of bribe-taking and making it easier for citizens to identify and report inappropriate behavior by customs staff.  IRI will also work with the Moldovan government to expand these efforts to other vital public institutions.

The depth of public dissatisfaction with government services, including endemic corruption, excessive bureaucratic inefficiencies and dismissive public employees, was revealed through IRI public opinion research.  Using this data, IRI conducted a series of focus groups, performed an analysis and designed this program to reform Moldova’s worst-performing public institutions.  Through close work with partners in the government and civil society, a detailed plan for public service reform was completed, which formed the basis for the cooperative agreement with the Moldovan government.

The September 27 signing represents the first step in a long and productive reform project.  Through the ambitious customer service initiative enshrined in the memorandum, the Moldovan government can successfully improve the accessibility and transparency of public institutions, enabling them to better provide the quality services that the people of Moldova deserve.