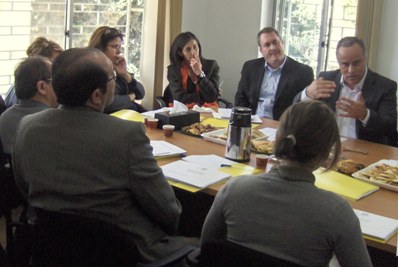 The Arab World for Research and Development (AWRAD), an independent Palestinian public opinion research firm and long-time partner of IRI, recently hosted a roundtable to highlight the results of its latest poll: After Egypt: Democracy, Elections and Negotiations in Palestine, conducted March 5-7, 2011.

The release coincided with mounting public demand for national reconciliation and a numerous youth-led unity demonstrations throughout the West Bank and Gaza.  The AWRAD roundtable was an opportunity to elevate the national discourse by providing a platform for local and international stakeholders to discuss the ramifications of regional uprisings on Palestinian politics.

Throughout the roundtable, participants debated the results of the latest AWRAD poll within the context of historical trends.  In an overview of public opinion since 1991, Dr. Nader Said, President of AWRAD, argued that the current dynamic of Palestinian politics is not as conducive to the political reform taking place in other Arab countries.  Starting with the euphoric Oslo era, Said traced public opinion through several distinct phases, from the establishment of the Palestinian Authority (PA) and its period of energetic institution-building to the downward spiral of disillusionment that cumulated with Hamas’s stunning 2006 electoral victory.

Said cited the election of Hamas as the beginning of a new trend cycle.  After enjoying a surge in popularity following the elections, Hamas’s poorly performing government and oppressive security services opened the door for a newly resurgent PA, led by the charismatic Prime Minster Salam Fayyad.  Today however, AWRAD polling shows a high level of disappointment with both Fatah and Hamas.  In both regions, constituents are deeply resentful of the ongoing internal split that has held political development and the peace process hostage for more than five years.

Participants in the AWRAD roundtable discussed how the schism has produced another shift in the Palestinian political landscape.  As approval for the governments in Gaza and Ramallah have sunk to the low 30 percent range, a broad array of independent parties have begun to challenge the historical domination of Fatah and Hamas.

Support for democratic political parties has been a pillar of IRI programming in the West Bank/Gaza since 1993.  Roundtable participants debated the challenges facing a Third Way movement, pointing to AWRAD data that indicates independent voters are a nebulous bloc.  Indeed, the latest poll reveals no discernable pattern in attitudes based on age, gender, education or geography, making it difficult for independent leaders to build support among a targeted group.