Ukrainians are ready to go to the ballot boxes on October 25, according to a poll conducted by the International Republican Institute (IRI) on behalf of the United States Agency for International Development. The poll found that 75 percent of Ukrainians are either very likely or somewhat likely to vote in the local elections, which will put new mayors, regional councils and city councils into office.

“These elections are critical, as newly elected officials will see increased authority if parliament passes the proposed decentralization law that is central to President Poroshenko’s reform efforts,” the institute said in a statement.

Ukrainians were widely in favor of a new regulation requiring 30 percent of a political party’s election list to be female: A combined 73 percent approved of the measure. Of those polled, 79 percent believe women serve influential positions in government. 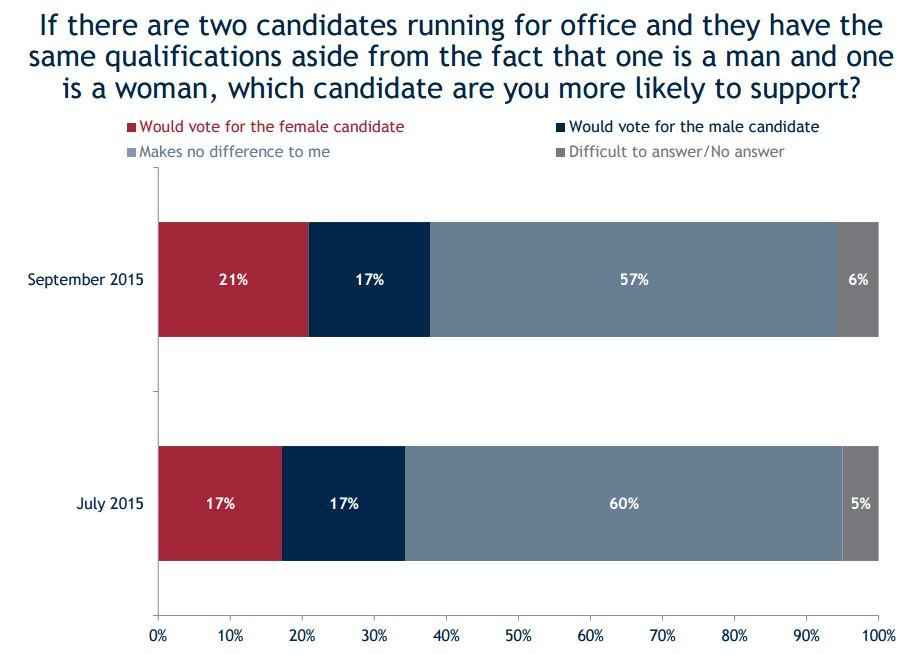 Part of the reason for high voter turnout might be displeasure with Ukraine’s current parliament. Of the 1,200 permanent Ukrainian residents polled, 48 percent strongly disapproved of the job the parliament is doing. Another 35 percent somewhat disappoved. Only 1 percent strongly approved.

As for party loyalty, Ukrainians are all over the place: 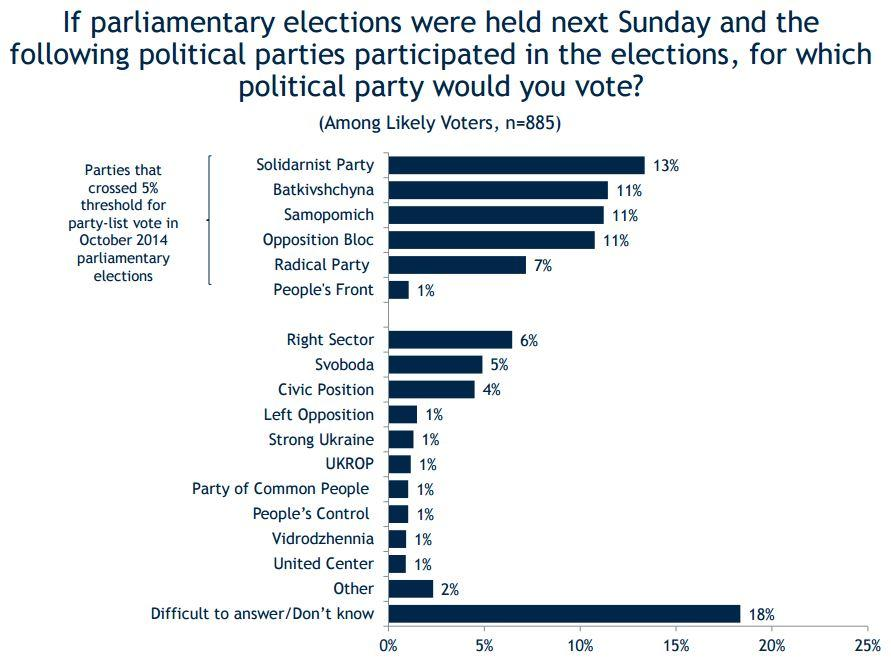 Poroshenko’s Cabinet of Ministers is not faring much better. The cabinet received only a 2 percent strong-approval rating, with 54 percent strongly disapproving of the job it is doing. 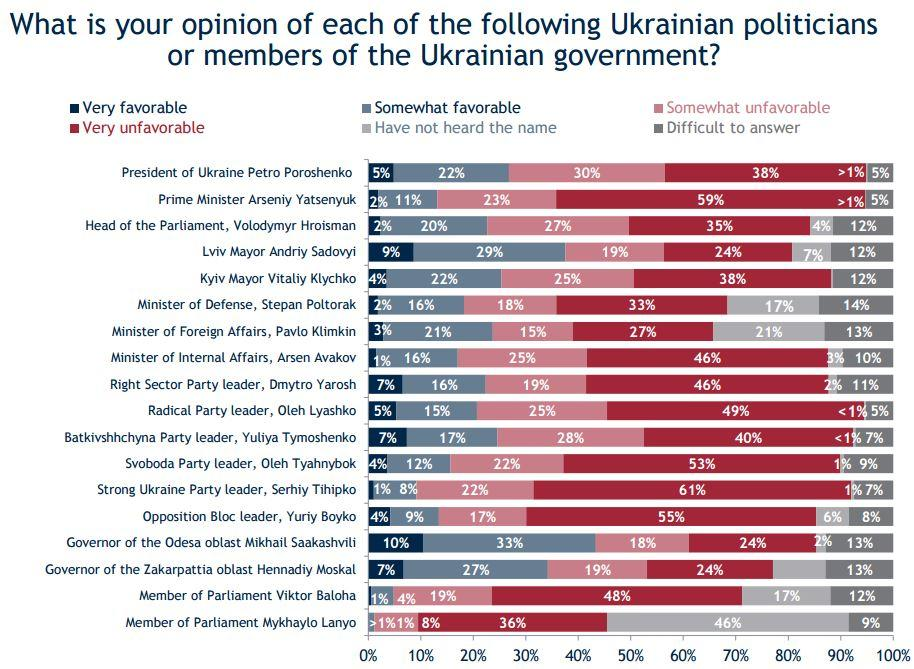 The economy is also of concern to Ukrainians: 51 percent say the economy has worsened a lot over the past year, although this number is down from a July poll, where 61 percent felt that way.

“As with IRI’s July poll, this new poll underscores the fact that Ukraine is at a critical juncture,” Stephen Nix, director of the IRI’s Eurasia programs, said in a statement. “People’s frustration continues to grow with the pace of and lack of information on reforms. If the government is going to succeed in passing the reforms that so many demanded on the Maidan, they must do more to reach out to voters and explain the reform package to citizens.”

One area of strong approval among Ukrainians was the new patrol police officers in Kiev, Lviv and Odessa. The new officers got a 41 percent strong-approval rating, with an additional 34 percent somewhat approving them. “This is one of the first reforms that Ukrainians can see, and it is a clear example of how positively people respond to reforms when they see them take effect in their communities,” Nix said of the police reform.

Ukrainians also strongly approved of joining NATO. When asked which international economic union Ukraine should join, Ukrainians have consistently agreed that the European Union would be best, although 17 percent said they would supporter a custom union with Russia, Belarus and Kazakhstan. This is surprising, as over a third of Ukrainians described their nation’s attitude toward Russia as “very cold.” An additional 26 percent described it as “cold,” and only 2 percent said it was “very warm.” 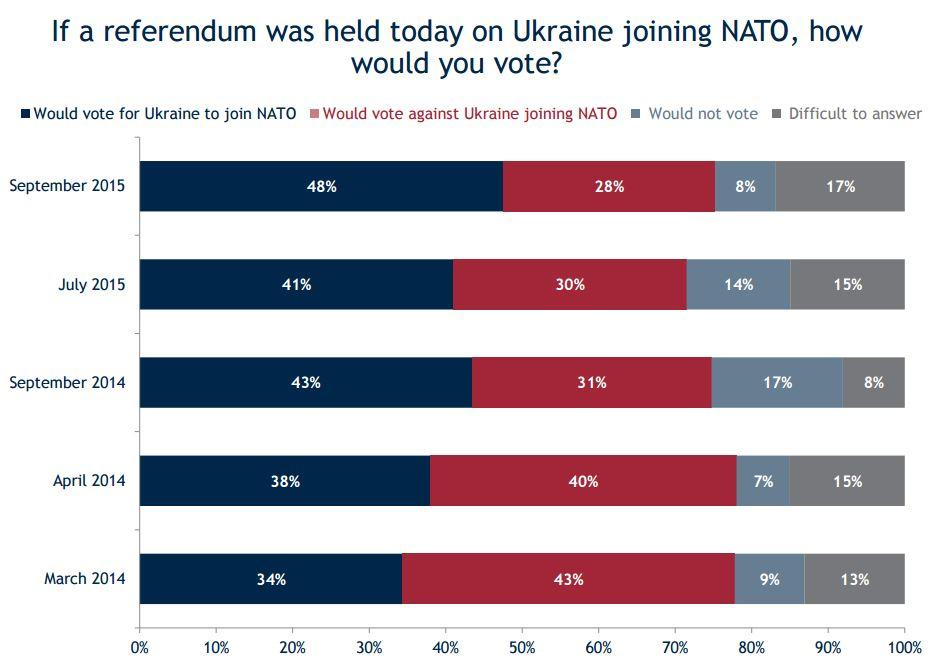 The United States didn’t get a warm reaction either: While only 5 percent said the relationship with the U.S. was very cold, only 9 percent said it was very warm. 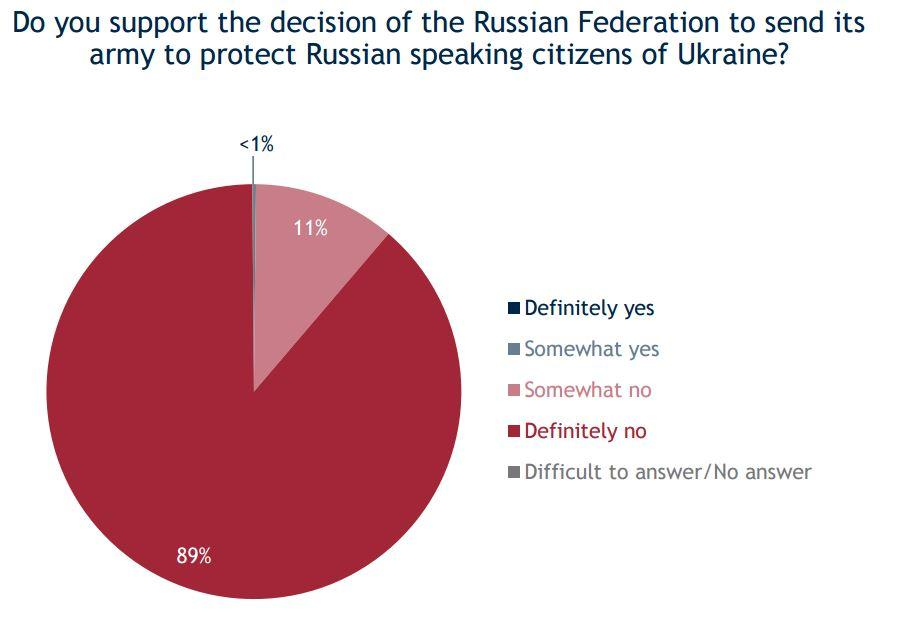 Here are the complete results from the poll:

Note: Thee poll has a margin of error of plus or minus 2.8 percent.