Parliamentary Forum Looks at Ways to Strengthen Freedom and Democracy 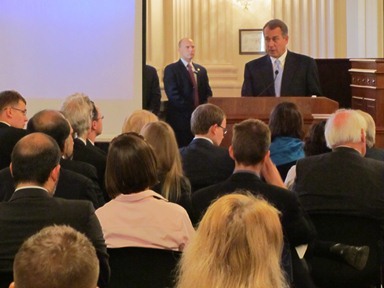 Parliamentarians representing members of the Community of Democracies gathered in Washington, DC on the International Day of Democracy, September 15, to discuss the role of the Parliamentary Forum for Democracy in strengthening freedom and democracy around the world.  Participants from Albania, Argentina, Canada, Georgia, Kyrgyzstan, Libya, Lithuania, Mexico, Moldova, Mongolia, Morocco, Nigeria, Russia, as well as representatives of the U.S. Congress participated in the forum looking at the role of parliaments in assisting and supporting democratic transitions and governance, freedom and human rights in repressive countries.

A highlight of the forum were remarks given by Belarusian democracy activist Anatoliy Lebedka who had served a six month prison sentence for protesting the fraudulent December 19 election results.  In his remarks, Lebedka spoke about the current situation in Belarus and asked for international support in building a democratic Belarus saying, “It is now the time to invest in democracy in Belarus.”

During the forum, participants also heard from the John Boehner, Speaker of the U.S. House of Representatives; Con. Dan Burton, Chairman of the U.S. House of Representatives Subcommittee on Europe and Eurasia; Con. David Dreier, member of IRI’s Board of Directors and Chairman of the House Democratic Partnership; Con. David Price, ranking member of the House Democratic Partnership; Emanuelis Zingeris, President of the Parliamentary Forum for Democracy; Irene Degutiene, Speaker of the Lithuanian Parliament; Vytautas Landsbergis, former Head of State and a member of the European Parliament from Lithuania; Asiia Sasykbaeva, Vice Speaker of the Parliament of Kyrgyzstan; and Giorgi Baramidze, Vice Prime Minister of the Republic of Georgia among others.

Distinguished guests and prominent opposition leaders from Asia, Africa and Europe discussed existing challenges regarding democratic transitions and explored ways to provide political support to democratic opposition actors who struggle to promote and strengthen democratic processes in repressive countries.  At the meeting, the Community of Democracies reaffirmed a strong commitment in assisting those countries seeking guidance and support during democratic transition and in the consolidation of democracy.

The Washington, DC meeting was organized by the Embassy of Lithuania, with assistance from the National Endowment for Democracy, the IRI and the National Democratic Institute.  On July 1, 2011, Lithuania passed the presidency of the Community of Democracies to Mongolia.