On October 30, 2016, Moldovans will go to the polls to vote in the first direct presidential election to be held in the country in 20 years, amid widespread dissatisfaction with the country’s trajectory. The potential for a “protest vote” in favor of pro-Russian candidates has raised fears for Moldova’s continued European integration and democratic development. 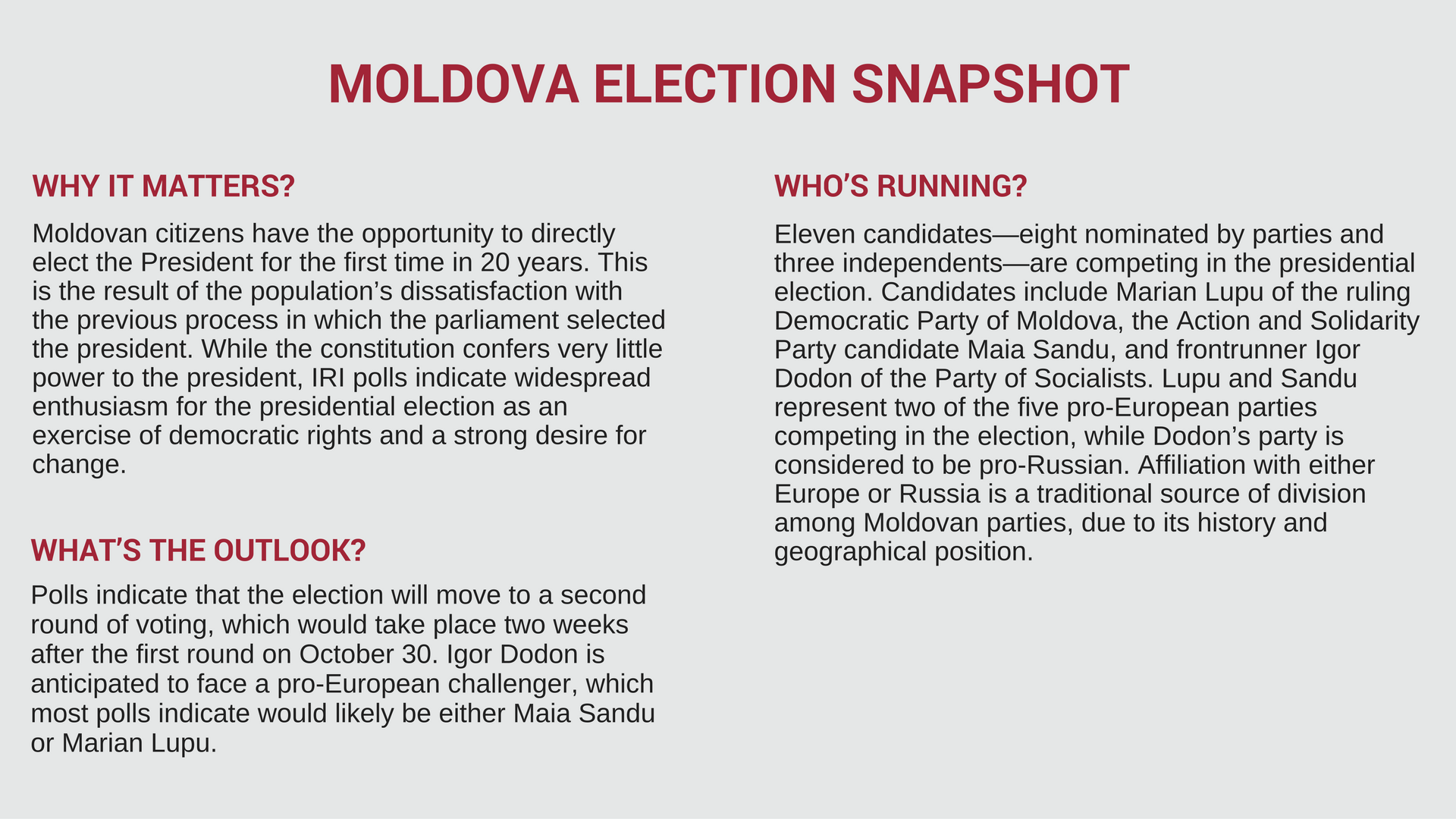 The presidential election takes place in an environment of high levels of dissatisfaction with the political status quo and the economy. According to the latest IRI poll, 82 percent of respondents believe that things in the country are going in the wrong direction. Public dissatisfaction intensified as a result of the collapse of the Liberal Democrat Party (PLDM)-controlled government in October 2015 following revelations of the involvement of party leader Vlad Filat with the high-level banking scandal and a no-confidence vote in parliament.

After three months of fractious negotiations and significant splits within the PLDM and the Communist Party (PCRM), a new majority was cobbled together in January 2016 around Democrat Party (PDM) Deputy Chairman Pavel Filip. The process of building the new parliamentary majority was fraught with procedural irregularities and allegations of corruption. Ongoing public protests against this political dysfunction have been a regular occurrence since April 2015, and drew tens of thousands to the streets of Chisinau in the last year.

IRI’s polling data indicates that Moldovans are eager to participate in the upcoming elections (89 percent said they are either very likely or somewhat likely to vote). However, the prevailing “protest vote” sentiment has raised fears that the presidential election may provide a mandate for pro-Russian parties and potentially undermine Moldova’s accession into Euro-Atlantic structures. Due to the Association Agreement between Moldova and the European Union, the international donor community and international financial institutions will be paying close attention to the outcome of the election.

IRI polling confirms that it is highly unlikely that any candidate will receive a majority in the first round of voting on October 30, making it likely that a second round of voting will take place in mid-November. Polls suggest that the second round will most likely pit Dodon against a pro-European challenger. In August, three pro-European parliamentary parties agreed to support a single candidate and to let polling data determine the best candidate to face the likely Socialist candidate in the second round. In October, Sandu was named as the single candidate for this pro-European coalition. Andrei Nastase of the Dignity and Truth platform, once a top-contender, withdrew from the race in support of Sandu, enhancing her polling numbers.