Serbia’s parliamentary and local elections come amid the rise of far-right parties, increasing tensions with Kosovo and public opinion shifting toward Russia. 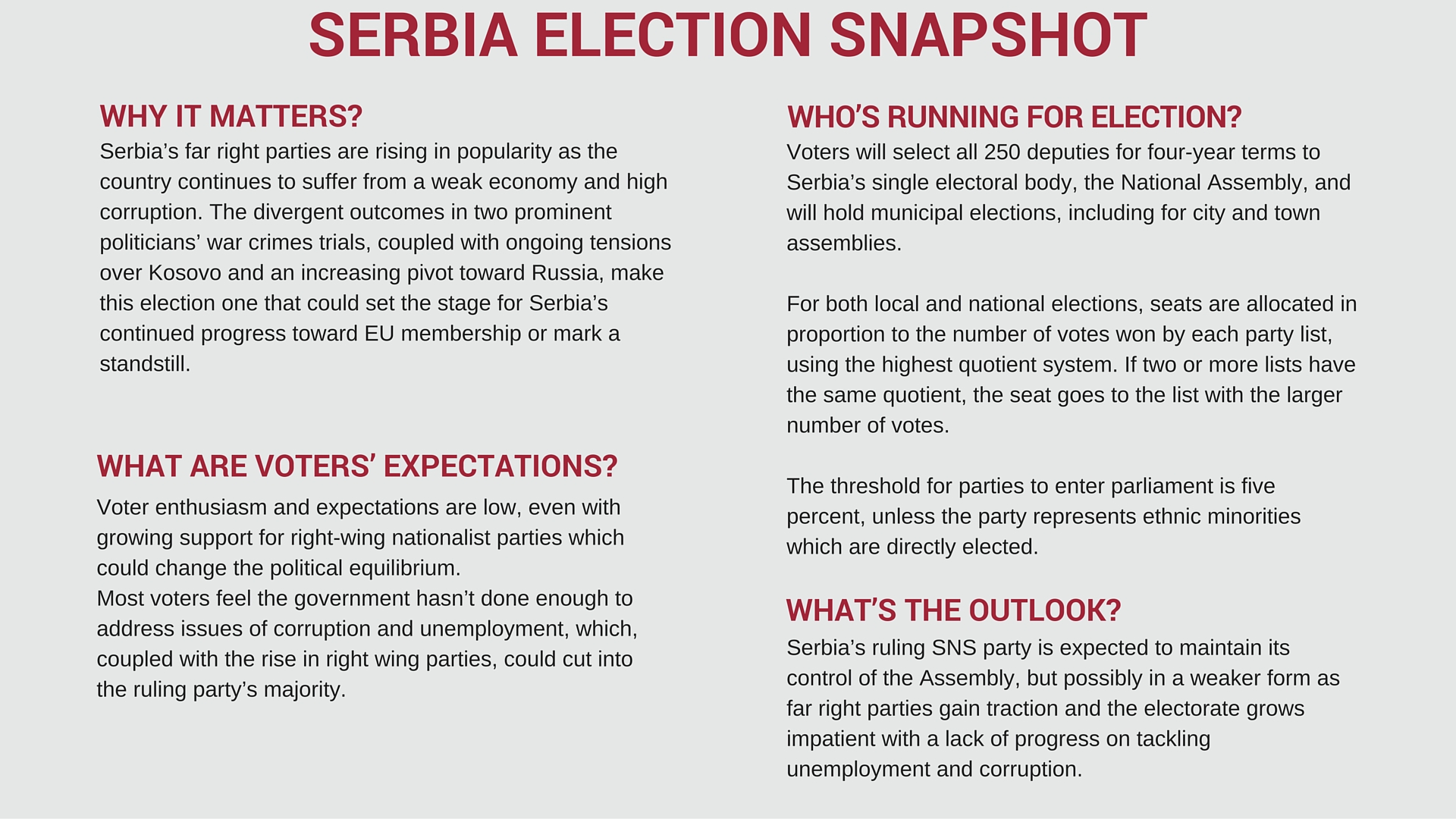 Snap elections on April 24 for all 250 deputies of Serbia’s national assembly has led the ruling political party to campaign on a platform of “four more years of stability,” but the stability the party offers may not be enough to tackle Serbia’s greatest challenges and could slow its bid for membership in the European Union (EU).

Serbia’s institutions remain weak and its government, led by the Serbian Progressive Party (SNS), has been slow to address Serbia’s pressing problems such as unemployment and corruption. While the SNS remains Serbia’s only publicly credible political party and is strongly pro-EU, the lack of progress in reforms has led to a decline in voter enthusiasm for EU membership and a pivot in public opinion toward Russia.  Meanwhile, Russia has increased its attention to Serbia, including a high profile state visit in 2014 by Vladimir Putin.

In addition, Serbia has been reluctant to recognize Kosovo’s independence—a precondition to its EU membership.  The recent acquittal of Serbian Radical Party leader, Vojislav Seselj, and the conviction of Radovan Karadzic on war crimes, is fueling the rise of right-wing nationalist parties.

Serb voters are generally apathetic about the upcoming elections as this will be their third parliamentary election in four years and media coverage of the campaigns has been sparse.

According to recent polls, SNS is expected to win 50 percent of the vote, maintaining its current dominance, and the Socialist Party of Serbia is expected to garner about 10 to 15 percent support. Far right parties, including Seselj’s Serbian Radical Party and Dveri, are gaining ground and are likely to achieve the five percent necessary to return to parliament after being shut out in the 2014 election.

For more than two decades IRI has worked in Serbia building strong, on-going relationships with all political parties, both in power and those in the democratic opposition. IRI’s Serbia program has included public opinion research which has informed Serbia’s political leaders about their citizens’ priorities. IRI has also worked to strengthen the capacity of policy-oriented NGOs and think tanks to strengthen democratic governance in the country and has worked for broader inclusion of women and youth in Serbian political life.