Update: The presidential election is currently scheduled to take place on February 8, 2016, the fifth time the election date has been delayed. Read our blog on Democracy Speaks for further analysis of Somalia’s turbulent electoral process.

On February 8, the president of the Federal Government of Somalia will be elected amidst mounting reports of corruption in the fledgling electoral process. These indirect presidential elections have been delayed four times, and as a result, the international community is beginning to question just how far Somalia has come on its path towards democracy. 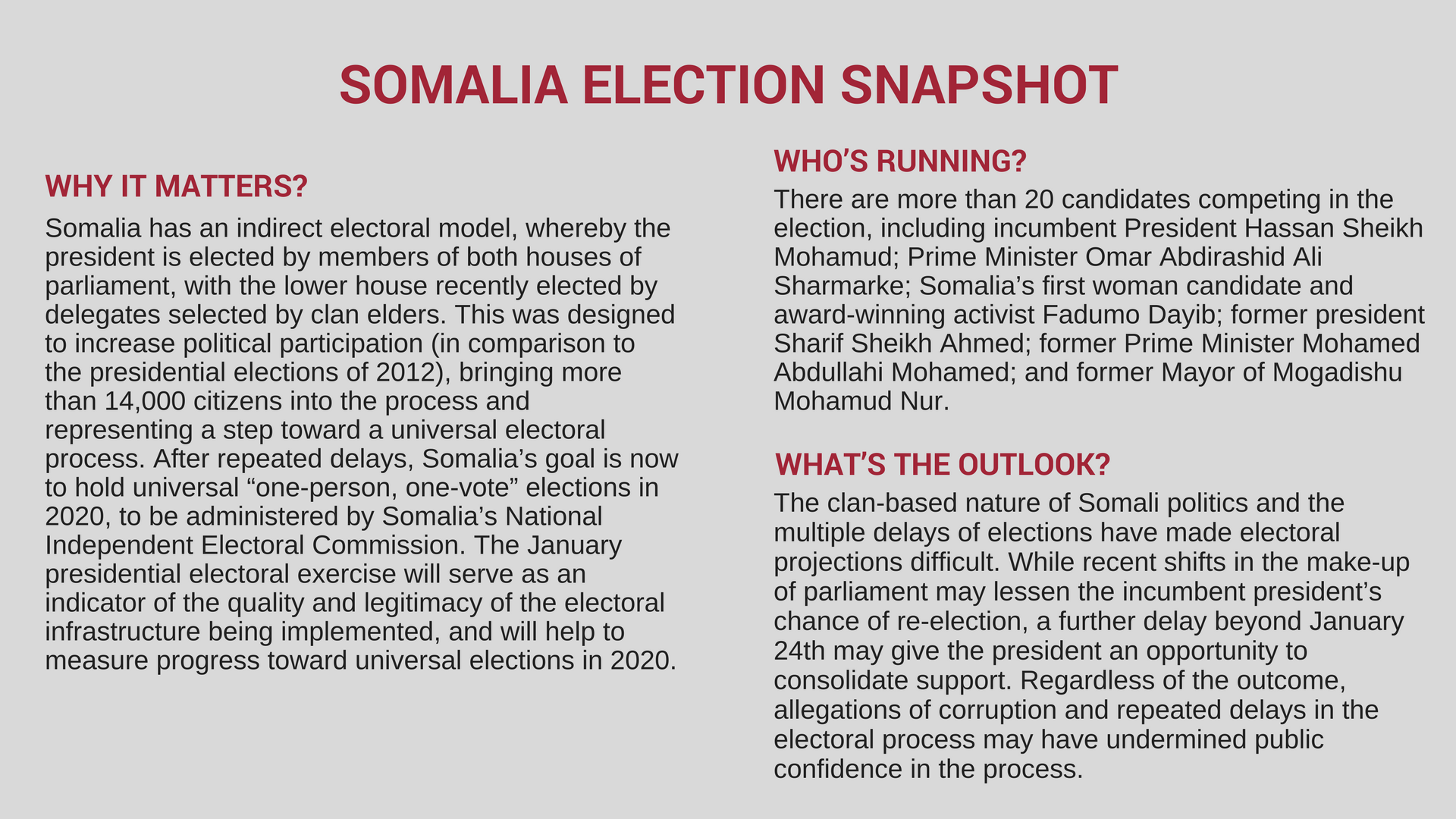 The president will be elected through a complex indirect electoral system. Universal elections are not yet possible in Somalia due to the continued reliance on a clan-based power-sharing arrangement, and the weak central authority contributing to poor organization in Somalia’s federal system and ongoing security challenges. Under the current system, 135 clan elders across the country nominated a total of 14,025 delegates from their communities. These delegates formed 275 electoral colleges that elected (between October to December 2016) the 275 members of the House of the People (lower house) of the Federal Parliament of Somalia. The House of the People and the Upper House of the Federal Parliament will elect the president.

The Transitional Federal Government is the internationally recognized central government authority, but its administrative structures are weak and control of territory is limited. Additionally, challenges including the lack of a civil or voter registry and significant security challenges (such as increased targeted Al-Shabaab attacks near voting locations by regional electoral colleges) make the task of holding a legitimate, universal election untenable at this time. Lack of public understanding of voting procedures is likely to compound popular apathy, as citizens remain estranged from the process of selecting their national leader. Additionally, the multiple postponements and widespread allegations of corruption linked to vote-buying could undermine citizen commitment to the electoral process going forward

On January 9, Parliament re-elected its speaker, Mohamed Osman Jawari. Analysts have suggested that this signals a likely second term for President Hassan Sheikh Mohamud, as the country’s top offices are generally balanced across the most powerful members of the dominant clans. At the same time, Ibrahim Sheikh Mudey won in the second round to become the first Deputy Speaker of the House, defeating Farah Abdulkadir, the closest ally of President Mohamud, which may undermine the president’s electoral prospects.

The repeated delays of the presidential elections can be seen as both beneficial and detrimental for President Mohamud. The longer the elections are delayed, the more of an opportunity Mohamud will have to lobby support from both houses of parliament. On the other hand, allegations of corruption, manipulation and voter fraud are delegitimizing the electoral process, which could ultimately be detrimental to Mohamud’s prospects of maintaining power. Although the current electoral model is slightly more democratic and inclusive than what was employed in 2012, these elections will be influenced by powerful clan dynamics and negotiated behind closed doors.