On August 11, 2016, Zambians will go to the polls to vote in presidential, parliamentary and local elections, and for a constitutional referendum on changes to the Bill of Rights. 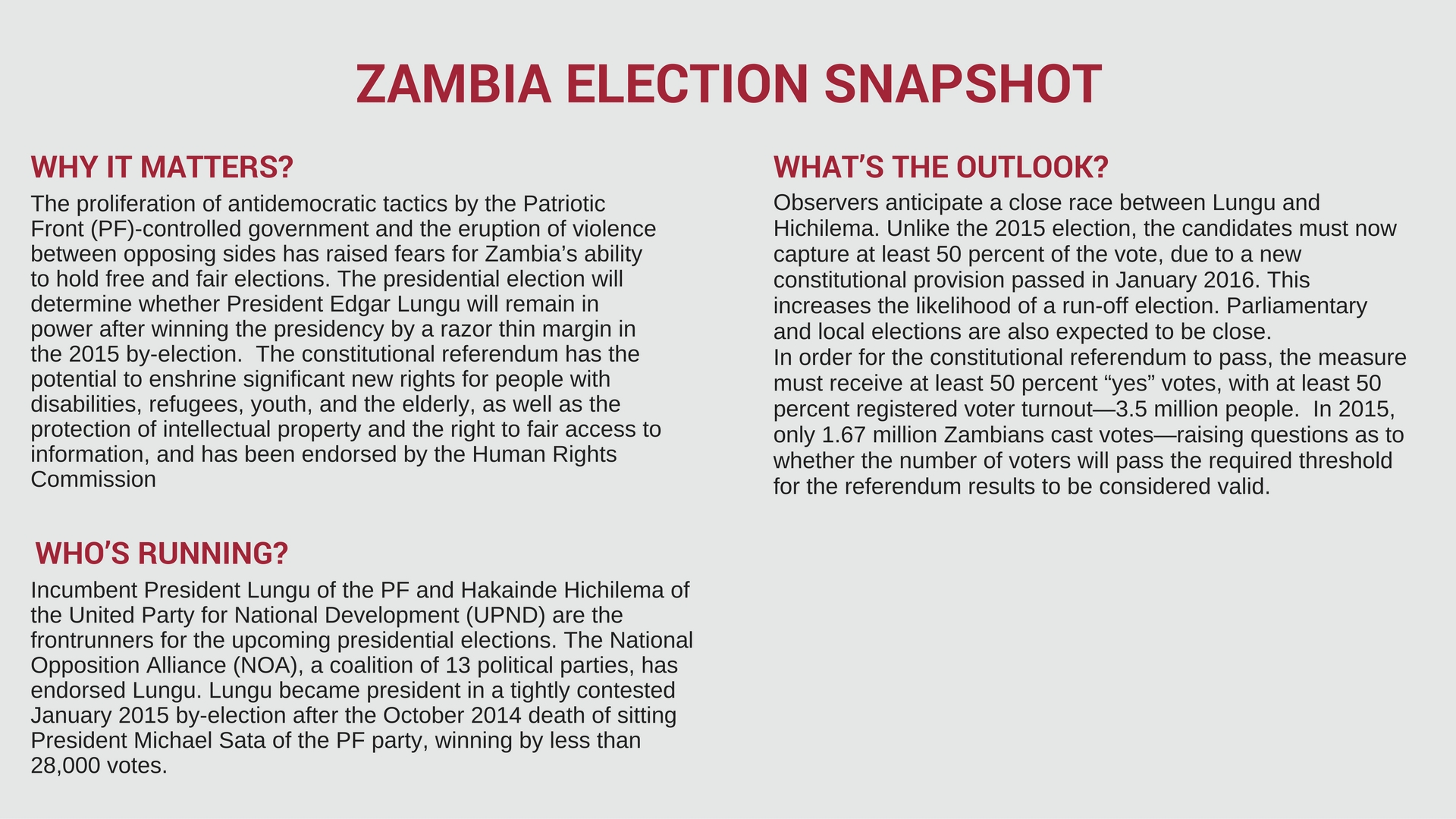 The environment in the lead-up to elections has been tense, with actions by the government raising fears that the conditions are not in place for free and fair elections. The opposition has accused the government of repressing their freedom of speech and limiting their ability to campaign freely, and there have been reports of intimidation and violence against campaign supporters. On July 9, police killed several demonstrators at a UPND rally, and several opposition leaders have been arrested, including UPND’s vice presidential candidate.

In July, the government suspended the campaign period for ten days, on the pretext of preventing further election-related violence. Additionally, in June, the Zambian government closed the leading newspaper, The Post, in a move widely criticized as censorship by human rights activists and the international community.

A controversial contract with a previously unknown Dubai firm to print the general election ballots prompted accusations of government plans to rig the election. There have also been reports that the ruling party has recruited foreign nationals from Malawi and DRC to register as voters in the upcoming elections. A journalist who attempted to investigate these accusations was attacked and seriously injured by PF supporters.

These elections will occur against the backdrop of the recent economic downturn. Unemployment is on the rise, copper mines—the backbone of Zambia’s economy— are facing closures, inflation is increasing and the country’s unstable power supply is harming productivity.

The presidential election is expected to be very close, with significant potential for a run-off.  Despite President Lungu’s consolidation of support through his alliance with the NOA, the UPND has been building its base since 2015 and could unseat the current president.

Traditionally, the PF has maintained a majority in the Northeast of Zambia, which is known for its copper mines and urban areas. The UPND has more support in the West, Northwest and South, which are largely agrarian. It is possible that the economic challenges in the Northeast may compel traditional PF voters to switch their allegiance to UPND.

Parliamentary and local elections are also expected to be close between PF and UPND. The outcome of the constitutional referendum is unclear, and the fact that voter turnout may not reach the required threshold makes it possible the constitution will remain unchanged.