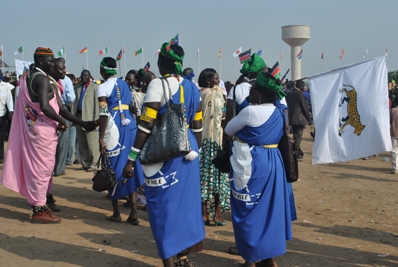 On July 9, 2011, the Republic of South Sudan became the world’s newest country.  Independence, mandated by the January 9 referendum which saw southerners unanimously vote to separate from the north, marks the first time South Sudanese have had a country of their own.

On July 9 and 10, South Sudan held celebrations to mark the birth of their new republic.  On the eve of independence, citizens across the country gathered in churches and public squares to light candles to remember those lost during “The Struggle,” as Sudan’s civil war is known.   At midnight, bells were rung across the country to mark the historic transition from the semi-autonomous region of Southern Sudan to the newly independent Republic of South Sudan.  Thousands of south Sudanese descended on the John Garang Mausoleum in Juba on the morning of July 9 to witness the official transition.  The National Choir—joined by hundreds of South Sudanese youth—led the singing of the new national anthem.  The flag of the Republic of South Sudan was raised and President Salva Kiir signed the Transitional Constitution into law.  United Nations Secretary-General Ban Ki Moon joined a plethora of heads of state, foreign ministers and foreign dignitaries to witness the occasion.

Challenges Facing the New Nation
Despite the abject poverty throughout South Sudan, the country sits on vast oil reserves which, if managed properly, will serve as a steady source of revenue for the near future.  Oil already provides more than 95 percent of government revenues, and pending future agreements with Khartoum, Juba—the capital of the south—may benefit even more from increased oil revenue as it assumes greater control of reserves.  A major challenge, however, lies with altering the current oil revenue sharing agreements with Khartoum.  As stipulated in the Comprehensive Peace Agreement (CPA), the north and south split oil revenues evenly, even though 75 percent of Sudanese oil comes from the south.  Negotiating an agreement that will allow the South Sudan to keep a fairer share of revenue will prove difficult, especially since the north controls the refineries, pipelines and ports.

Developing a multi-party political system is another challenge the country faces.  No matter how it is measured, the Sudan Peoples’ Liberation Movement (SPLM) is the dominant political force in South Sudan.  Beginning as a rebel movement during the civil war, the SPLM has transformed itself into the most broadly recognized 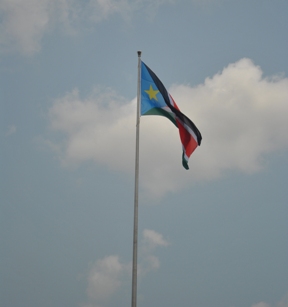 political entity throughout the south.  It currently holds more than 90 percent of the seats in the national assembly as well as all cabinet positions, including the presidency.  Political parties, many of which have emerged in the aftermath of the CPA, do not have the resources or capacity to compete against the SPLM.  As South Sudan continues to progress as a democratic nation, it is imperative that space be opened for formidable political parties to effectively compete with the SPLM on relevant issues.  A more pluralistic society will allow a broad-based government to effectively meet the needs of the Southern Sudanese people.

Political Context Surrounding Independence
After a 20 year civil war claimed more than two million lives and displaced millions more, the CPA was signed in 2005 which finally ended the internecine struggle.  The CPA stipulated that, among other items, South Sudan would be a semi-autonomous state until 2011, when it would hold a self-determination referendum.

Recent attacks by rebel movements directed toward South Sudan entities and the Sudan Peoples’ Liberation Army (SPLA)—the official army of the south—have led to unrest and displacement of thousands of innocent civilians in the north/south border regions.  This unrest illustrates a potentially troubling security situation for the nascent republic.

In addition to the internal conflicts, the recent escalation in hostilities on the north/south border is cause for great unease.  The violence, concentrated in both the Nuba Mountains region of Southern Kordofan and the oil-rich area of Abyei, features soldiers allied with the SPLA pitted against the Northern Sudan Armed Forces.  Although an agreement was signed by both north and south governments in June to demilitarize the Abyei region, the continuing violence in Southern Kordofan has left more than 70,000 civilians displaced and has included targeted attacks by the North on ethnic Nubans.   The hostilities have intensified the already tenuous relationship between northern and southern governments.  Any upsurge in hostilities could prove disastrous for the new government as it attempts to build a peaceful, stable nation.