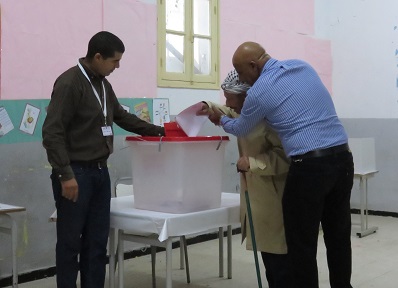 Tunis, Tunisia – Tunisian citizens at home and abroad spoke strongly in favor of democracy on October 26 to elect the country’s first post-revolution parliament.  An international delegation from IRI said the process was “credible, transparent and allowed for genuine political competition among political stakeholders.”

Tunisian citizens should be proud of the significant strides the country has made since the 2011 revolution.  The October 26 elections represent a key milestone in the country’s consolidation of democratic institutions and practices.  Nearly 60 percent of Tunisia’s 5.2 million registered voters cast their ballots in the October 26 parliamentary elections that delegation chairman Andrew S. Natsios called a “step forward in Tunisia’s difficult path to democracy.”

Natsios, who served as administrator of the U.S. Agency for International Development from 2001-2006, said he was impressed with the ability of Tunisians to conduct these elections during challenging times for the country.  “Not only was Tunisia facing threats of violence from extremists who would like to stop democracy from gaining a new foothold in the region, but the country also had to tackle the logistical challenges of holding these elections while simultaneously preparing for the presidential election that is just a few weeks away.”

Despite these challenges, IRI said the October 26 elections place Tunisia on a solid course to consolidate its new democratic institutions with a presidential election on November 23 and a potential presidential run-off election in December.  These elections occurred in the context of a new constitution passed in January 2014, the creation of an independent election administration and approval of an inclusive election law, all of which indicate a commitment to pluralism and respect for human rights. 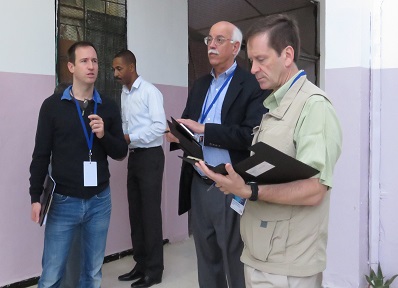 Mark Green, president of IRI, and former ambassador and U.S. Congressman commented, “These elections were an important step in Tunisia’s democratic transition, one that still faces numerous challenges if Tunisia is going to fulfill the hopes of those who took to the streets in 2011 to demand a greater voice in their government and greater freedom in their daily lives.”

IRI reached its own milestone on October 26 observing its 200th and 201st elections with delegations in both Ukraine and Tunisia.  The nonprofit Institute also unveiled its new Election Snapshot (Arabic and French), which gives citizens and media an easy to use reference on how Tunisia preformed across a number of categories including:

IRI commends the Independent High Authority for the Elections(ISIE) and respective Independent Regional Authorities for Elections (IRIE) for administering a credible process that was well organized and orderly, and which allowed voters to express their will at the ballot box in a manner that was unfettered and private.  ISIE and IRIE election workers appeared to be aware of the electoral procedures and had received training in advance of Election Day.

Independent and political party observers were granted full access to the process, including vote counting and tabulation lending to the overall impression of transparency of the election.

Although IRI observers often witnessed security personnel inside polling centers, which is a violation of the election law, the presence of security forces did not appear to interfere in the voting process or appear threatening.

IRI noted several areas where future elections could be strengthened.  Although an improvement from the 2011 national constituent assembly (NCA) elections, the delayed issuance of electoral procedures resulted in delayed training of election workers.

Improved Transparency
Coming elections would be strengthened with timely publicizing of electoral rules and procedures.  IRI’s observation efforts during the voter registration and pre-electoral period also noted that a more proactive public communications effort by ISIE would have resulted in greater transparency of its decisions and improved awareness on the part of electoral stakeholders of electoral procedures.

Improved Efficiency
A key process point of improvement that IRI would encourage ISIE to make before the presidential election is a more equitable distribution of registered voters within polling centers.  The assignment of voters to polling stations within a center according to a sequential listing of national identification numbers on the voter registry, whether intended or not, had the effect of separating older voters who have lower identification numbers from younger voters.

In essence, this resulted in longer lines in lower numbered stations earlier in the day and fewer voters in higher numbered stations.  Not only did this lengthen wait times for some voters but also created greater workloads for some election workers.  Coming elections will go more smoothly and the burden on poll workers will be reduced if polling stations are assigned in a different fashion, such as by surname, a randomization of voter identification number or by home address.

Vote Counting and Tabulation
Although vote tabulation and counting were conducted according to established electoral procedures, the efficiency and orderliness of future elections would be strengthened with additional training of polling workers.  Greater adherence to electoral rules to ensure non-interference in the counting and tabulation process is also required of independent and political party observers.

Making these changes, and changes to the distribution of registered voters within polling centers would also more equitably distribute workloads for election workers and reduce fatigue at the end of the day.

The increase in voter turnout from the 2011 NCA elections from 51 to nearly 60 percent suggests that Tunisians are engaged in their democratic transition and enthusiastic about newfound freedoms.  Still, voter participation for the October 26 elections represented a little more than half of eligible voters, suggesting there is still more work to be done in fostering an inclusive, fully participatory electorate.  Anecdotal evidence suggests young voters may not have turned out in as large of numbers as older voters.  Regardless, it is clear that there must be a greater emphasis placed on the civic engagement of young Tunisians if the country is to realize its full democratic potential.

Role of Civil Society
Many people believe that conducting a successful election simply consists of citizens casting ballots and votes being counted.  However, elections are ultimately embodied in countless citizens both inside government and in civil society.  The role of Tunisian civil society is especially important in elections with more than 1,300 political party and candidate lists and since this is only Tunisia’s second democratic election since the 2011 revolution.

The widespread presence of independent observers representing civil society contributed to the transparency of Election Day.  They also helped educate voters, held political parties and candidate lists accountable for their electoral promises, raised awareness of violations of campaigning rules, and added to the strength of the overall process.

IRI’s long-term observation effort revealed that many parties engaged in campaign-like activities prior to the start of the official campaign period and that this practice occurred widely without respect to a particular party or group.  Relaxing campaign rules in future elections would provide Tunisian voters with more opportunity to make informed choices and would likewise ease the burden on electoral institutions forced to administer unnecessarily burdensome rules about campaign activities.

Looking Toward the Future

Tunisian leaders will need to work hard to meet the expectations the public has for freedom, prosperity and stability.  As Tunisian Prime Minister Mehdi Joumaa recently told IRI, Tunisia must turn the lofty language of the constitution into behavior if it is to advance its democracy.

Tunisians have told their political leaders that they expect them to work together to achieve a successful democratic transition and bring about the desired political stability and economic reforms needed.  This was the hope of the democratic activists who took to the streets in 2011, but their dreams will not be realized without the cooperation of all political stakeholders.

IRI’s international delegation of 43 observers witnessed voting and ballot counting at more than 200 polling stations throughout the country.  In addition to observing the elections in Tunisia, IRI had teams in Belgium, France and the United States owing to the country’s unique system of allowing Tunisian citizens living overseas to have representatives in Tunisia’s parliament.

IRI’s delegation was led by Andrew S. Natsios, former administrator of USAID and currently executive professor and director of the Scowcroft Institute of International Affairs at the Bush School of Government and Public Service at Texas A&M University.  Natsios was joined on the delegation by Ambassador Mark Green, president of IRI, former U.S. ambassador to Tanzania and former U.S. congressman representing Wisconsin’s 8th District.

Prior to the elections, delegates were briefed by political party representatives and Tunisian election officials.  They were also briefed on the rights and responsibilities of international observers and Tunisian election law.  Delegates were then deployed throughout the country where they observed at polling stations to identify and evaluate strengths and weaknesses in Tunisia’s election system, including campaign regulations, the balloting process, vote tabulation and reporting.

From September 9-12, an IRI-National Democratic Institute pre-election assessment mission reported that Tunisia was on a decidedly democratic path, but cautioned that to maintain public confidence, it must ensure parliamentary and presidential elections are free of undue partisan interference and manipulation.  The full report is available in English, Arabic and French.