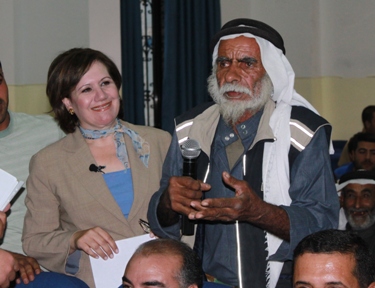 In the run-up to Jordan’s November 9 parliamentary elections, IRI sponsored a series of 12 candidate debates, one in each of the Kingdom’s governorates.  The debates provided an unprecedented opportunity for candidates to present their platforms to a wide audience of voters and for voters to directly engage with potential parliamentarians.  Seventy-two candidates, including 18 female candidates, participated in the debates with more than 1,230 Jordanian voters in attendance.  The debates were moderated by prominent Jordanian television personality Eman Najjia.

Each candidate was given two minutes for opening remarks followed by audience questions where voters posed questions and concerns to the candidates.  The candidates were able to tell voters how they would address issues if elected.  Following the question and answers portion, the debates featured a lighting round where voters could ask the candidates yes or no questions.  This round drew significant interest from the audience as candidates had to respond with a direct yes or no on questions regarding their support for increasing the women’s quota to 25 percent, political party quotas, and if the candidates would open a local office and maintain their current phone number if elected to parliament.  Closing the debates, each candidate was allowed two minutes of remarks.