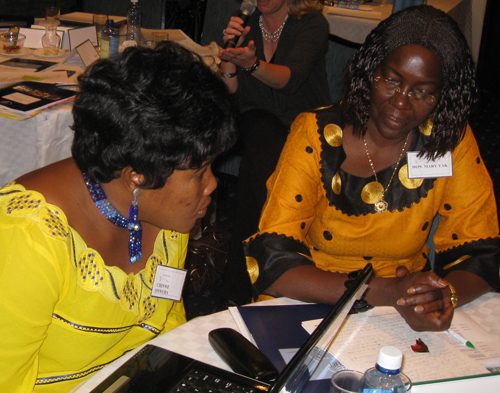 At a gathering last month of the Women’s Democracy Network in Nairobi, Kenya, Mary Yak, a member of parliament from the National Assembly in Sudan, made the astute observation that while women are considered ‘peace makers’ in the world of Africa’s civil wars and subsequent reconstruction efforts, they are much more than that.  They are, in fact, the ‘peace keepers.’  Mary’s words reminded us why women need a seat at the table if there is going to be lasting stability in Sudan or any number of other African countries.

The comment came as 23 women from six nations in Africa discussed their personal and professional efforts as members of parliaments, political activists and civil society leaders.  They shared stories and ideas in their common struggles to obtain leadership positions in political parties and parliaments.  While their personal experiences varied, the support and encouragement they offered one another was remarkable for its consistency.   Each of these extraordinary women made valuable connections with their peers in neighboring countries, and each left the conference better informed, more engaged, and fully aware that they are not alone in their ongoing quest to keep peace in their home lands.

As they resume their work in their own countries they are faced with daunting obstacles.  Amina Warsame of Nagaad, an umbrella organization of women’s organizations, noted that she formed this organization because of women’s complete absence from the political scene in Somaliland.  She highlighted the importance of women learning what their rights are and better understanding their respective government’s attitudes toward women’s political participation.  Amina is determined to help keep “democracy on a solid base in Somaliland” and plans to run for the Elders House so she can ensure good policies for women’s participation in politics.

The participants from Sudan are similarly determined.  Alokiir Auger, a member of parliament from the Southern Sudan Legislative Assembly, noted that women have come a long way in Southern Sudan, but it has not been an easy struggle.  She encouraged her colleagues “to share, to learn more, because knowledge never has a roof.”   Samia Ahmed, also from Sudan, emphasized the importance of women working in coalition to break the isolation they often encounter.  Four political parties in Sudan are led by women, and Samia and Mary Yak underscored how much more effective they could be working together in coalition.  Samia also underscored that the burden to bring lasting change belongs to the Sudanese people themselves:  “Why would someone from the United States be more concerned about women in a small village than the Sudanese themselves,” she asked?

Inclusion and coalition building were common themes for these women.   The delegation from Uganda noted in particular that women at the grassroots level are just waiting to be tapped to take part in the political process.   Real reform and lasting peace will be elusive in Uganda unless women at all levels of society, particularly the very ones who have experienced first-hand the horrors of the war in the north, are given the opportunity to be included in the political process.  Coalition building also was an important topic for the participants from Kenya, many of whom have joined together to work for common interests as the country approaches a national referendum on a new constitution.

The stories and comments shared by participants at the conference in Kenya are good reminders about the valuable role women can make in bringing lasting peace to societies in transition.   The women at this conference understand that they own the burden of building and keeping the peace. Their simple request was for help in setting realistic goals for their organizations and translating the lessons learned from one another into practical steps forward in their own countries.

Koki Muli, executive director of the Electoral Leadership Institute in Kenya, quoted Nancy Reagan when she said, “Women are like tea, you will never know how strong they are until you put them in hot water.”   As we start a new decade, these strong women of Africa should inspire us all to help them be keepers of peace.