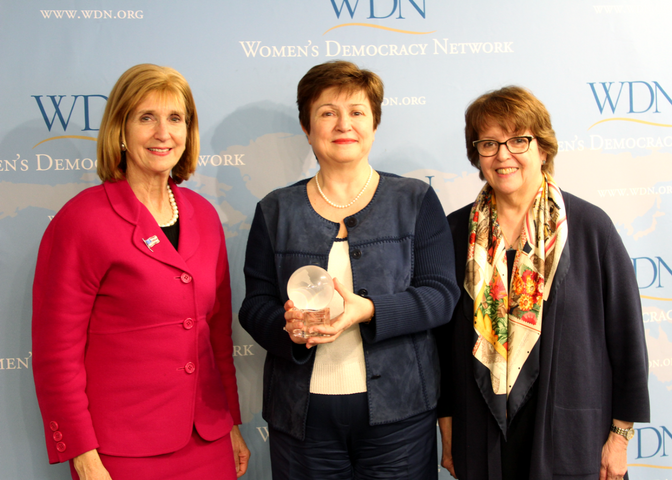 Dr. Georgieva and Administrator McMahon were presented with WDN’s Jeane J. Kirkpatrick Award in recognition of their contributions as women leaders and their commitment to women’s economic empowerment.

“It’s amazing to me that in 2018 there are still laws on the books in some 150 countries that discriminate against women, especially in limiting their economic independence,” said Dr. Georgieva. “That’s why we at the World Bank are committed to increasing women’s access to finance and financial services, because the ability to start business and control your own life is freedom.”

Reflecting on the role of women in the economy and politics, Administrator McMahon thanked the participants in WDN’s International Women’s Day conference program for “Being the women you are and leading change around the world, both economically and in your communities.”

WDN is a global initiative of the International Republican Institute (IRI) that empowers women to fully participate in public life. IRI President Daniel Twining said, “At IRI, we believe that a full and robust democracy and economy depends on the equal participation of women. That’s why we’ve incorporated women’s empowerment as an essential element in our programming around the world, including the Women’s Democracy Network.”

Dr. Georgieva is the first CEO of the World Bank, where she has been instrumental in building support across the international community to tackle complex challenges in the developing world and beyond, including women’s economic empowerment.

About the Women’s Democracy Network

Established by the International Republican Institute in 2006, the Women’s Democracy Network (WDN) believes that a full and robust democracy depends on the equal participation of women. WDN empowers women around the world to participate in the political process and help them gain the skills needed to take on greater leadership roles in government, political parties and civil society. WDN connects aspiring and accomplished women leaders across the globe, creating forums for sharing ideas and experiences, providing technical training and resource materials.