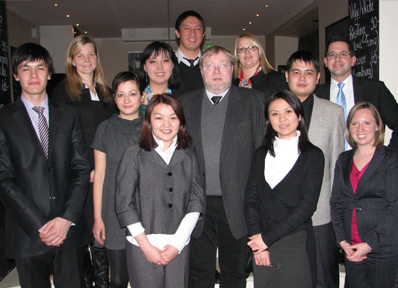 The demands of governing leave little time for newly elected leaders to learn the intricacies of government, especially in countries that are transitioning to democracy. Without the skills needed to effectively manage, countries can experience instability or see a backslide into authoritarianism.  As part of its ongoing Rising Stars initiative, IRI organized a one-week exchange for six Kyrgyz young professionals to learn from Estonia’s post-Soviet transition and economic reform process.  As a former Soviet Republic, Estonia was an ideal classroom for future Kyrgyz leaders to enhance their knowledge of economic policy and good governance strategies.

Through Rising Stars, IRI is able to identify potential leaders before they come to power and provide them with the knowledge they need to develop strong democratic institutions and implement sound economic policies in their countries.

Working in cooperation with the Estonian Atlantic Treaty Association, IRI coordinated meetings for participants with prominent economists and policy makers.  The most notable was former Prime Minister Mart Laar, who was at the forefront of the Estonian reforms after the fall of the Soviet Union.  Learning from Estonia’s successful post-Soviet transition, participants were provided insight on economic policy, transparency, and innovation strategies that helped transform Estonia into a vibrant democracy.

Other standout meetings included Member of Parliament Andres Herkel, former mayor of Tallinn Ardo Aasmae, former Transportation and Communications Minister Raivo Vare, journalist Andres Reimer, current Advisor to the Minister of Regions Aivo Vaske, and US Embassy Deputy Chief of Mission Karen Decker.  During these meetings, the Rising Stars delegation learned about the impact on the state of economic and political reforms implemented after Estonian independence.  Afterwards, participants had an opportunity to discuss the successes and shortcomings of the reforms, the challenges these leaders faced, and how they overcame various obstacles.

Additionally, the program coordinated a number of site visits to international and state-owned institutions, enterprises and projects such as the Estonian Development Fund, Tiger Leap Foundation, Estonian National Bank, Enterprise Estonia and the E-Governance Academy.  These visits enabled the participants to observe the mechanics of the Estonian government and the country’s economic management policies.

Participants returned to Kyrgyzstan energized by their experience as part of IRI’s Rising Stars program, eager to disseminate and develop the new ideas gained from the exchange.  Participants from CAFMI started work on a publication for distribution to the general public that compares the Kyrgyz and Estonian experiences.  Meanwhile, other participants endeavored to adapt E-governance models from Estonia in Kyrgyzstan, particularly in the field of education, through the development of an academic evaluation system for students.