Youth Lead a Wave of Change in Tunisia and Egypt 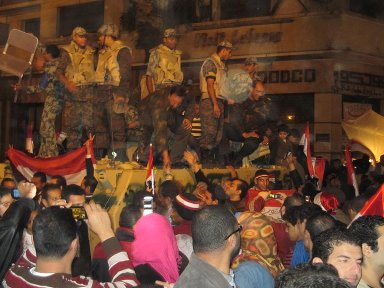 The world has stood witness this past month as millions in Egypt and Tunisia began to unshackle themselves from decades of authoritarian rule.  The pervasive control apparatuses of the Zine el Abidine Ben Ali and Hosni Mubarak regimes had been nearly all-consuming.  In Egypt, the former regime exploited a biased, corrupted constitution to remain in power for more than 30 years, hiding behind a state security service that operated through unjustified arrests, torture and by maintaining a invasive environment of fear.  In Tunisia, a significant portion of the population operated on behalf of the state security services.  In both countries, streets were closely monitored and open dissent met with repression.  Faced with such daunting circumstances, activists took to the Internet.  For years they communicated and organized using emerging new media tools, forming ties that would later surface on the streets throughout Tunisia and Egypt.

In the aftermath of this historic event, IRI is supporting the efforts of Tunisians as they build and strengthen the institutions of democracy.  IRI is engaging Tunisia’s large youth demographic, which played an essential role in the uprising – indeed, in Tunisia the overthrow of Ben Ali is known as the Youth Revolution.

While Tunisia’s uprising was spontaneous, advocates for democracy struggled for years against pervasive repression to build support for change.  To support these activists, IRI connected them to civil society leaders in Chile to receive training in advocacy and democratic governance.  In 2007 IRI worked with the Kawakibi Democracy Transition Center to train activists on new media communications, which were the primary means of communication for protestors, providing them a vital platform to share information.

Led by an invigorated and dynamic youth generation, Tunisians enthusiastically support change and desire greater public involvement and accountability of authorities.  As the country prepares for historic elections, IRI will continue to partner with the country’s civil and political actors as they build their democracy.  IRI also will work with local partners to conduct the first national poll of public opinion in Tunisian history, providing political leaders with scientific data to help them develop political platforms and respond to the needs and desires of their people.

Tunisia’s remarkable success and the bravery of its populace have inspired reformist movements throughout the Arab world.  In no country has this ripple effect been more apparent than Egypt, where more than two weeks of demonstrations led to President Mubarak’s resignation on February 11, 2011.

The watershed protests that began in Egypt on January 25 were spearheaded in large part by communities of tech-savvy youth activists who, under the close scrutiny of the government security structure, ardently campaigned to bring change to Egypt for years.  In 2004, these activists − some of whom associate with a coalition known as the April 6th Youth Movement − took part in a famous rally calling for then President Mubarak to step down.  These youth, such as IRI partner Ahmed Maher, recently highlighted in a New York Times article on the 2011 protests, took to the streets to protest Mubarak’s moves to consolidate power for his party and set the stage for his son succeed him in the presidency.

In 2006, April 6th Youth Movement leaders Maher and fellow IRI alumnus Israa Abdel Fatah, created a Facebook page calling for a massive demonstration in support of a worker strike in El-Mahalla el-Kobra.  On April 6, the day of the planned strike, Fatah was arrested by authorities, a move which galvanized a wave of cyber activists who continued to vocalize their dissent online and in the street until they eventually forced Mubarak to relinquish power.

Capitalizing on increasing discontent with high employment and rising prices, this young generation of activists, who despite having faced continual harassment from Egyptian and regional authorities, demonstrated their commitment to bring about a process of reform and make their governments accountable to its people.