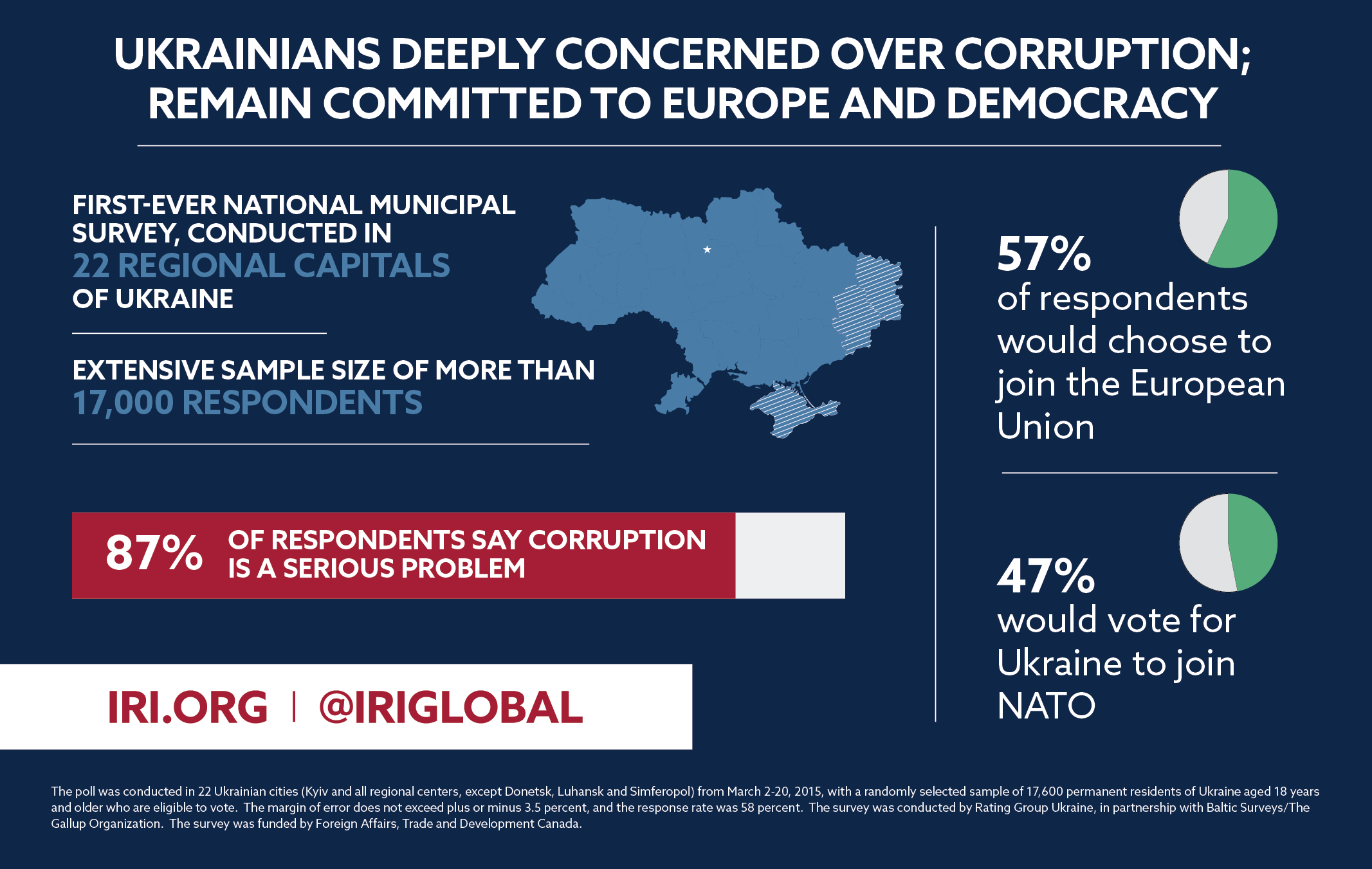 Kyiv, Ukraine – A new IRI municipal poll conducted in Ukraine found an overwhelming majority of citizens reporting that corruption and nepotism were serious problems impacting their daily lives.  Importantly, despite their concerns over corruption and the economy, Ukrainians also showed their strong support for the country’s decision to align more closely with Europe and the West.

Poll Offers Unprecedented Window on Local Governance and Citizen Attitudes
IRI’s poll, the first-ever national municipal survey, was conducted in all 22 regional capitals of Ukraine not under the control of Russian or Russian-backed forces.  It utilized an extensive sample size of more than 17,000 respondents—800 in each city surveyed—and was designed to ascertain views of local government, municipal services and a wide range of local issues.

“Ukraine is at crossroads in its democratic development,” said Stephen B. Nix, IRI’s regional director for Eurasia.  “This new survey lays out the challenges facing communities across the country, and provides tools for citizens and leaders to chart a new course.”

Despite these obviously troubling numbers, IRI said it also sees signs of hope for a democratic renewal.  “The Ukrainian government and donor community should be encouraged that Ukrainians are willing to acknowledge that corruption is a big problem, and yet they also feel pride in their communities and are quick to point to reforms and programs that are working,” said Nix.

Several cities have already made great strides in improving the transparency and quality of local services.  In Ternopil and Khmelnytsky, for example, more than half of the residents felt that they have good access to their local authorities.  Residents of Kharkiv and Vinnitsya were also pleased with their cities’ local transportation and infrastructure.  In Chernivtsi, nearly half of all residents surveyed felt that they had both an accessible local city budget and satisfactory information on proposed or current legislation from their city council.

“Clearly, there is a long way to go for Ukrainians to believe that their leaders have fulfilled the promise of the EuroMaidan movement,” said Nix.  “But as we have discussed survey results with community leaders, we have heard a renewed commitment to tackling corruption and increasing citizen involvement.  At IRI, we stand ready to work with these and future leaders to build stronger services with increased transparency and accountability.”

Ukrainians Committed to Move their Country towards the West
The IRI survey also showed strong support for European integration and a clear preference for the European Union (EU) over the Russian-led Customs Union in each city polled. Although support for the EU was highest in western and central Ukrainian cities, a plurality of respondents in all regions—including the east and south—support EU membership over Customs Union membership.  The survey also showed strong support for membership in NATO across the country.

Nix said that these strong numbers, in the face of both military aggression in eastern Ukraine and a challenging economic situation, show that citizens are resolved to see that greater democracy and market-based economic policy come to Ukraine.

Ukrainians Need to Increase Citizen Participation in Governance
A majority of respondents in all but one city surveyed believed that citizen participation in community events, such as public hearings and parent meetings at schools, was important.  However, IRI’s data also demonstrated that current participation in such events was low, with respondents saying that they have participated in single digits in all 22 cities.

“It’s important that leaders from all parts of Ukrainian life, from government to civil society, encourage citizens to take charge of their own future,” said Nix.  “Citizens need to embrace their civic responsibilities if they want to see change.  Waiting for government to address every problem isn’t the right answer.”

Nix said that civic education would be a key part of IRI’s work in coming months.

Methodology
The poll was conducted in 22 Ukrainian cities (Kyiv and all regional centers, except Donetsk, Luhansk and Simferopol) from March 2-20, 2015, with a randomly selected sample of 17,600 permanent residents of Ukraine aged 18 years and older who are eligible to vote.  The margin of error does not exceed plus or minus 3.5 percent, and the response rate was 58 percent.

The survey was conducted by Rating Group Ukraine, in partnership with Baltic Surveys/The Gallup Organization.  The survey was funded by Foreign Affairs, Trade and Development Canada.