How Vulnerable is Jordan to Violent Extremism?

Jordan has long been thought of as an island of stability in a volatile region. However, the country suffers from enduring (and potentially explosive) political, economic and social tensions. 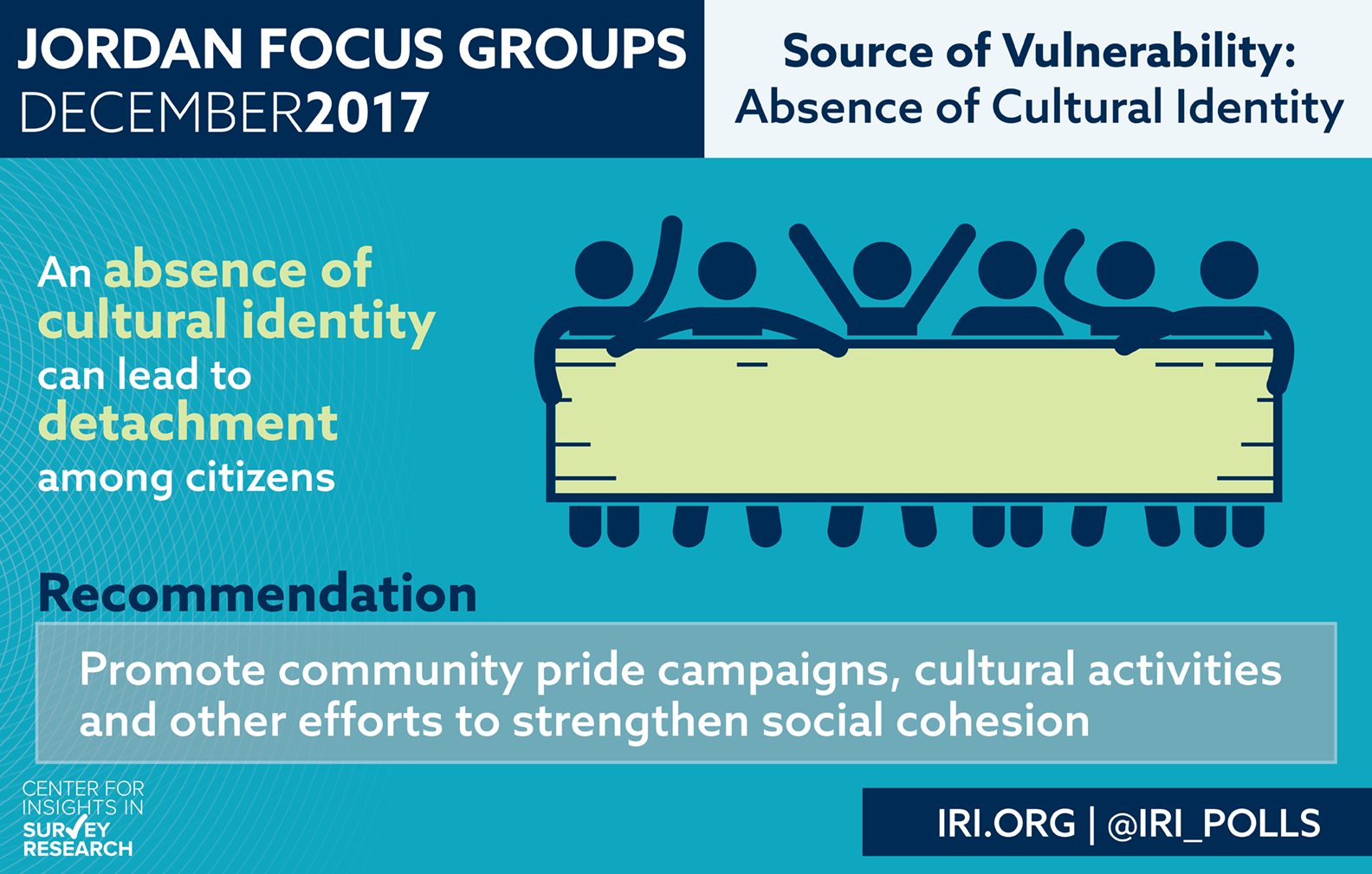 In an effort to further explore these dynamics, IRI designed and commissioned qualitative research on the local drivers of violent extremism in Mafraq and Zarqa, two municipalities which have been traditional hotbeds of radicalization and host to large numbers of Syrian refugees. These data form the basis of our most recent report, Violent Extremism in Jordan: Local Governance, Tribal Dynamics and Forced Migration, which also draws upon IRI’s most recent national poll of Jordanians.

Although the path to VE is non-linear and highly individualized, our research revealed a number of structural and societal challenges which may be feeding violent extremism—namely, weak governance structures that contribute to feelings of frustration and hopelessness that could drive vulnerable Jordanians to embrace violent extremism.

The absence of outlets for young Jordanians to express their frustrations is one area of acute vulnerability. Youth are struggling with feelings of hopelessness driven by the economic situation and political disenfranchisement.

Our research also indicates that the traditional legitimacy of tribes presents both challenges and opportunities to addressing VE vulnerabilities in northern Jordan. While strong family ties can be leveraged to inculcate non-violent attitudes among youth, tribalism may also drive perceptions of favoritism and corruption in the country.

Focus group discussions further shed light on how Jordan’s regional proximity to geopolitical flashpoints may fuel narratives that can be used to justify violent extremism. For example, at-risk FGD discussants in Zarqa said that violence was justified to fight occupation in Jordan or in another Arab or Muslim country.

This, among other myriad dynamics, has left some young Jordanians vulnerable to radical ideologies at home and abroad. Between 2,000 and 4,000 Jordanians fought as foreign terrorist fighters (FTFs) with the so-called Islamic State in Iraq and Syria (ISIS,) making Jordan one of the world’s highest per capita contributors of FTFs. In fact, the roots of ISIS can be traced back to al-Qaeda in Iraq (AQI), which was founded and led by Zarqa-born Abu Musab al-Zarqawi.

Such vulnerabilities could threaten the hard-won stability that the government has invested so much to achieve.  After the devastating terrorist attacks the country suffered in 2005, the government of Jordan adopted a wide-reaching terrorism law and what has been described as a heavy-handed response to real or alleged acts of terrorism.

Despite the fact that Jordan has been successful at thwarting large-scale terrorist plots, smaller scale terrorist attacks have proliferated in recent years. In August 2018, security officers stormed the hideout of suspected militants in Salt where four security officers perished after coming across explosives—explosives that were intended for attacks on civilians and security installations. Additionally, ISIS’ territorial loss in Iraq and Syria continues to create reverberations as Jordanian FTFs return home, and the challenges of reintegration were reflected in the attitudes of our interviewees—including the two returned foreign fighters interviewed for the report. Given the widespread public apprehension about the potential security threat posed by this population, it will be important to further strengthen the current policy and programming response.

Jordan faces a number of pressures that continue to destabilize the country, including a Syrian refugee population exceeding 670,000. This has strained limited resources and the already-struggling economy. Our research found that existing frustrations with political and economic tensions were exacerbated and often blamed on or associated with Syrian refugees.

Building on points of resilience in Jordan, IRI’s latest research will inform and underpin our approach to this programming going forward to ensure that our work supports efforts to tackle the root causes of violent extremism. Read the full report for more information.

See the Arabic version of this report here. 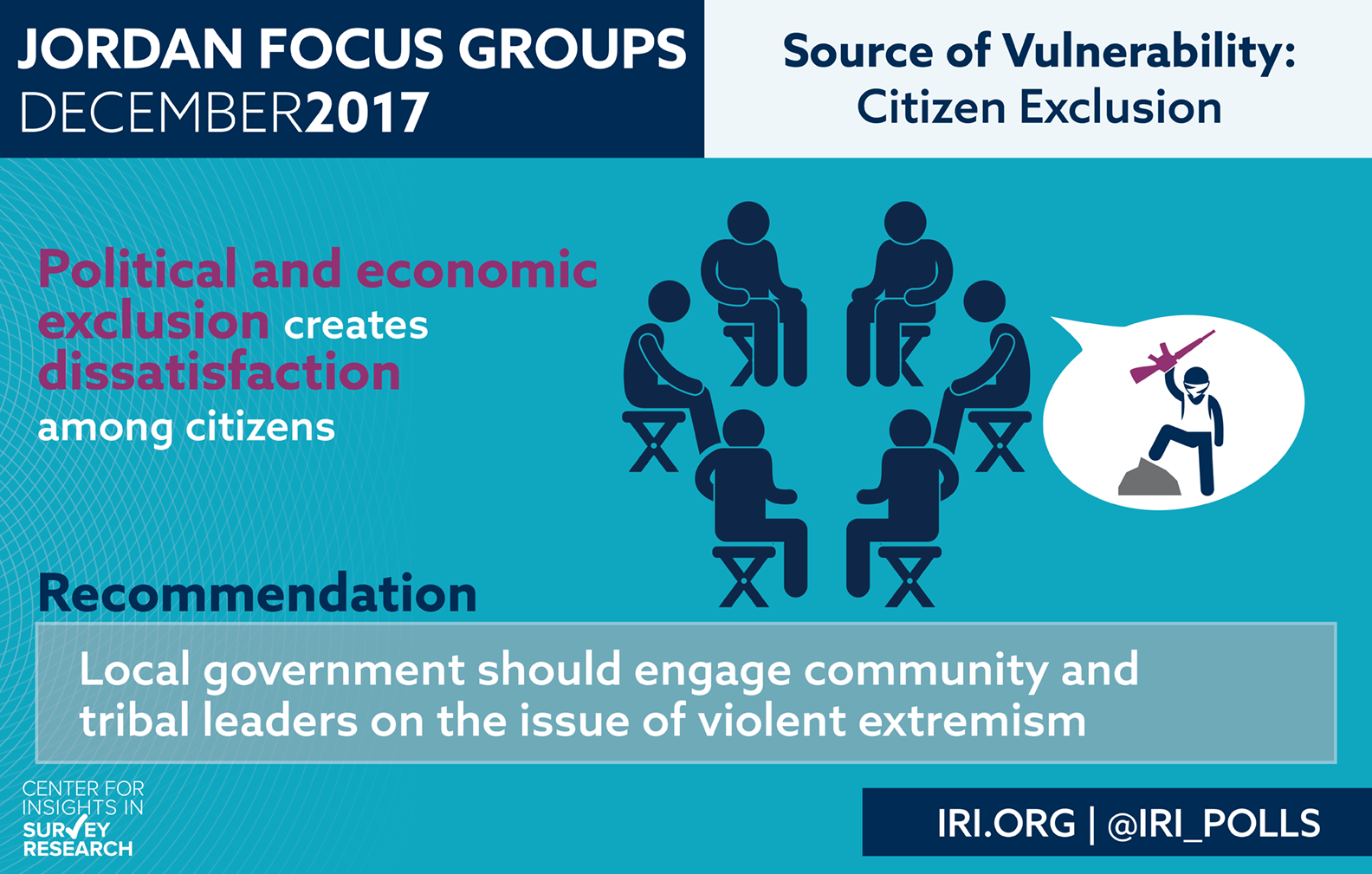 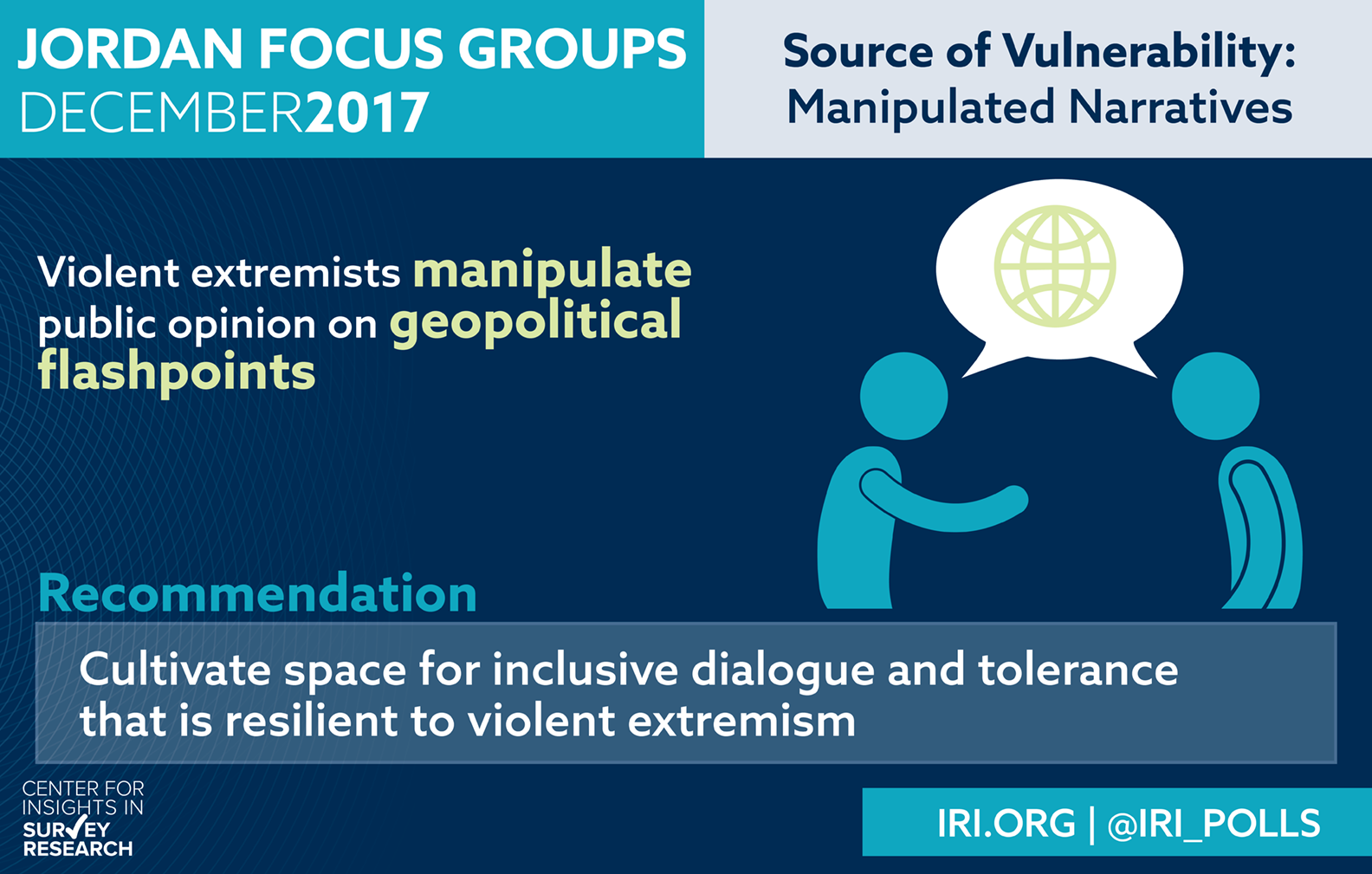