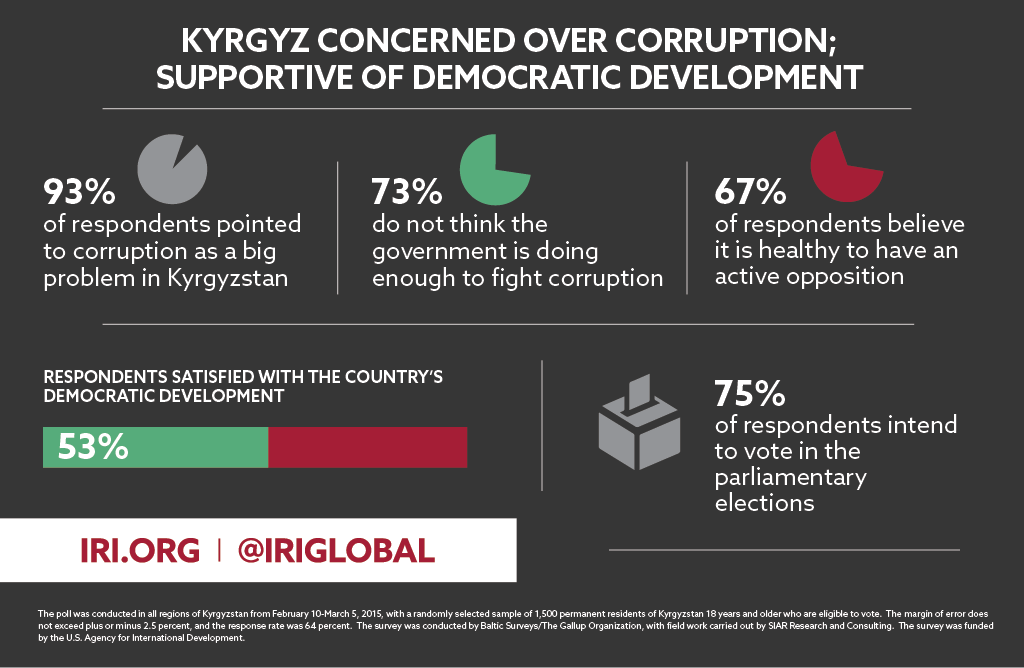 Deep Concerns over Corruption
As they have in other IRI polls conducted in recent years, respondents pointed to corruption as their greatest national concern.  An overwhelming 93 percent of Kyrgyz say that corruption is a big to very big problem in the country.  A wide range of institutions, from state automobile inspection and police to parliament and financial police, are characterized by more than half of respondents as being very corrupt to somewhat corrupt, and nearly three-quarters say the government isn’t doing enough to fight corruption.  Looking ahead, a plurality point to fighting corruption as an action that would move the country in the right direction.

“It’s obvious that Kyrgyz leaders need to take corruption head on,” said Ambassador Mark Green (ret.), president of IRI.  “With the parliamentary elections rapidly approaching, it seems clear that voters want to hear in concrete terms what candidates will do to tackle a challenge that has been plaguing the country for some time.”

Kyrgyz Show Support for Democracy and Competitive Politics
In a positive sign, while professing little interest in politics, the IRI poll reveals that nearly three-quarters of Kyrgyz are planning to vote in the upcoming parliamentary elections.  More than half of respondents say they’re satisfied with the country’s democratic development, and nearly two-thirds agree that it’s important to have a healthy opposition.

Warning Signs on International Relations
A troubling two-thirds of Kyrgyz believe the dissolution of the former Soviet Union was a bad development and three-quarters show some support for the proposed Customs Union with Russia.

“Kyrgyzstan has made huge democratic strides in recent years,” said Green.  “These results show that nothing should be taken for granted.  Kyrgyz say that they need more information regarding the Customs Union.  The West should make sure that vacuum is filled not by propaganda and pressure from Moscow, but with fair, accurate information.”

Methodology
The poll was conducted in all regions of Kyrgyzstan from February 10-March 5, 2015, with a randomly selected sample of 1,500 permanent residents of Kyrgyzstan 18 years and older who are eligible to vote.  The margin of error does not exceed plus or minus 2.5 percent, and the response rate was 64 percent.

The survey was conducted by Baltic Surveys/The Gallup Organization, with field work carried out by SIAR Research and Consulting.  The survey was funded by the U.S. Agency for International Development.