IRI Kyrgyzstan Poll: Majority Intend to Vote in Elections despite Concern over Corruption and Unemployment 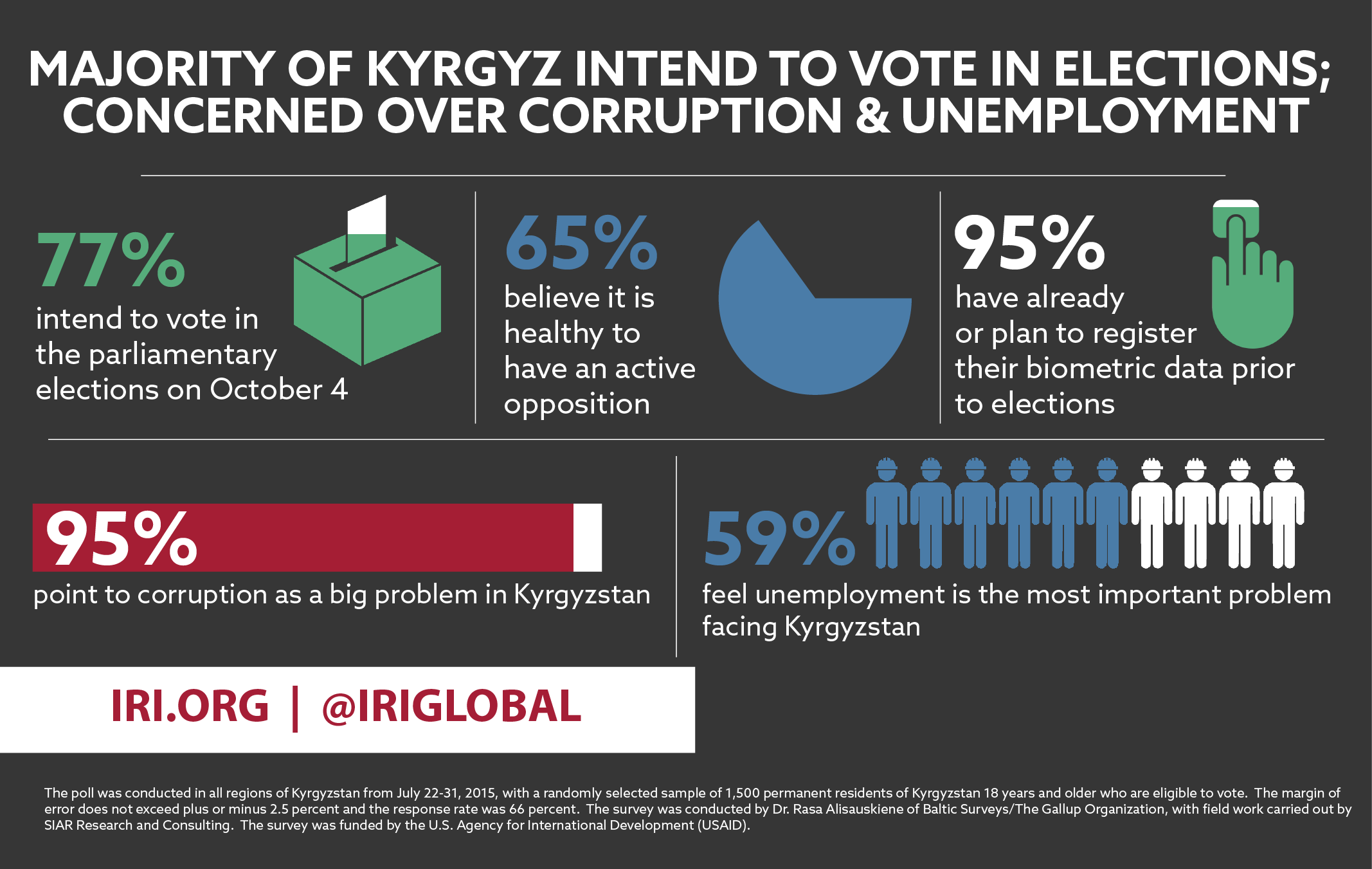 Majority Intend to Vote in October 4 Parliamentary Elections
IRI’s poll revealed that more than three-quarters of respondents (77 percent) are planning to vote in the upcoming parliamentary elections.  Recent changes to electoral code require that Kyrgyz citizens register their biometric data by September 19, in addition to presenting their voter ID card on Election Day, in order to vote.  In a positive sign, IRI’s poll showed that as of July 31, 80 percent of Kyrgyz report having already registered their biometric data.

Economic Concerns, Unemployment and Corruption
At the national level, Kyrgyz are concerned with economic issues, particularly unemployment.  Fifty-nine percent of Kyrgyz felt unemployment was the most important problem facing Kyrgyzstan while 35 percent were worried about rising prices and inflation.  This sentiment was echoed at the local level, where unemployment was identified as the greatest concern, followed by lack of drinking water and poor roads.

The Kyrgyz population continued to see corruption as one of their greatest national concerns, with an overwhelming 95 percent of Kyrgyz saying that corruption was a big to very big problem in the country.  A wide range of institutions, including state automobile inspection, universities, medical institutions, Prosecutor General’s office, courts and militia, were characterized by more than half of respondents as being very corrupt, and nearly three-quarters said the government wasn’t doing enough to fight corruption.  Looking ahead, a plurality pointed to fighting corruption as an action that would move the country in the right direction.

“The parliamentary elections are a great opportunity for the Kyrgyz government to demonstrate its commitment to the fight against corruption,” said Stephen B. Nix, Eurasia regional director.  “I encourage authorities to allow parties to compete on an equal playing field and take the steps necessary to minimize chances of electoral fraud.”

Support for Democracy and Competitive Politics
About half of respondents said they were satisfied with the country’s democratic development, and two-thirds agreed that it was important to have a healthy opposition.  In addition, half of respondents felt people in Kyrgyzstan were not afraid to openly express their political views.

While professing little interest in politics, 15 percent of Kyrgyz were political party members, an increase of nine points since IRI’s last poll in February-March 2015.

Methodology
The poll was conducted in all regions of Kyrgyzstan from July 22-31, 2015, with a randomly selected sample of 1,500 permanent residents of Kyrgyzstan 18 years and older who are eligible to vote.  The margin of error does not exceed plus or minus 2.5 percent, and the response rate was 66 percent.

The survey was conducted by Dr. Rasa Alisauskiene of Baltic Surveys/The Gallup Organization, with field work carried out by SIAR Research and Consulting.  The survey was funded by the U.S. Agency for International Development.