IRI Poll: Jordanians Optimistic about Direction of the Country even as Concerns over Terrorism Emerge 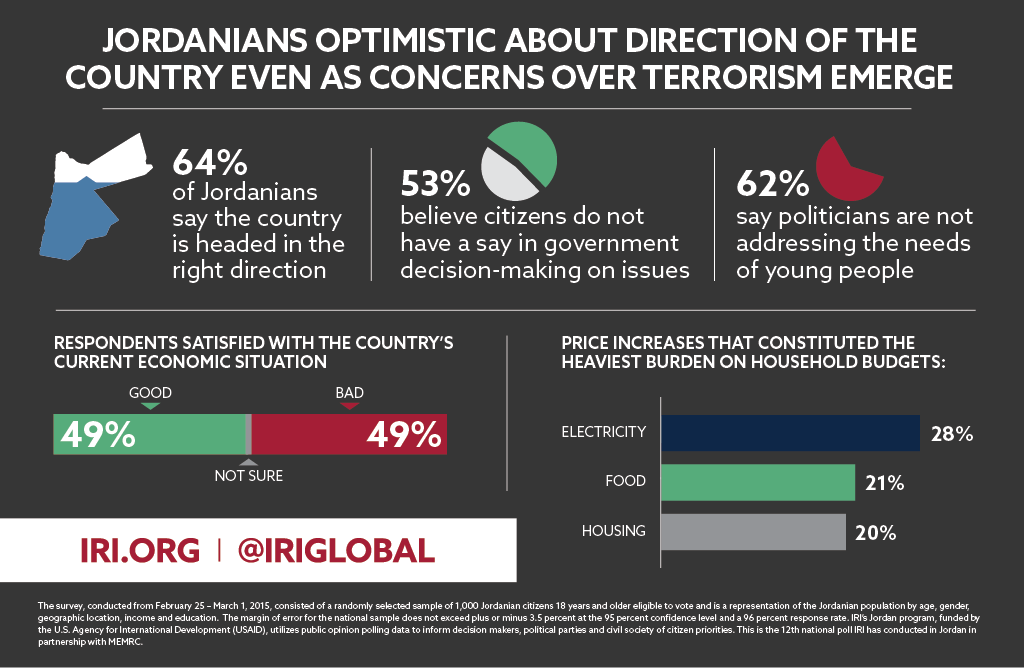 Amman, Jordan – A poll conducted by IRI and Middle East Marketing and Research Consultants (MEMRC) shows that the majority of Jordanians are optimistic about the direction of their country, despite mixed attitudes about Jordan’s economy and emerging concerns about terrorism.  Low confidence in parliament and political parties remains; however, most Jordanians are also interested in political reforms.

“Security is obviously important to Jordanians and they support the steps being taken by their government, especially given the levels of violence we see in neighboring countries like Syria and Iraq,” said Scott Mastic, IRI’s Middle East director.  “Still, the regional threat posed by ISIS makes terrorism register as a front of mind issue in Jordan for the first time.”

Country Headed in Right Direction, Split on Current Economic Situation
A majority of Jordanians (64 percent) think their country is going in the right direction, largely due to a common sense of stability and security.  In spite of the perception of being on the right track, the country is evenly split on the current economic situation, with 49 percent of Jordanians rating the economy as good or very good, and an equal percentage rating it bad or very bad.

The increased prices of electricity, food and housing now rank as the heaviest burdens on household budgets; a significant change from IRI’s 2013 poll, where housing did not even register and fuel dominated the list of concerns.  These factors, along with concerns about corruption and unemployment, make respondents split on whether the economy will improve during the next 12 months, with 44 percent expecting the general economic situation to improve and 50 percent expecting it to stay the same or decline.

For the first time in an IRI survey, a significant percentage of respondents (10 percent) cited terrorism as the single biggest problem facing Jordan as a whole, behind a host of economic concerns that include unemployment, poor economic conditions, the rising cost of living and poverty.

Low Level of Public Confidence in Parliament; Majority Believe Citizens do not have Say in Government Decision Making
While only six percent of Jordanians self-identify democratic reform among their top three concerns, many more (75 percent) say they are interested in political reforms when the question is posed to them directly.  Additionally, a majority (53 percent) believe citizens do not have a say in government decision-making on issues that directly affect them, and 62 percent say politicians are not addressing the needs of young people.

The poll suggests that much work is to be done to improve the ability of political parties to act as true conduits of public interests, and to address the needs of women and youth.  A strong majority (67 percent) believe women should be equally represented in political decision-making processes and 62 percent say they are likely to vote for a woman candidate.

Perceptions of ISIS
An overwhelming majority of Jordanians (89 percent) consider ISIS to be a terrorist organization and most (71 percent) support Jordan’s involvement in the international campaign.  More than a quarter of the interviewees (26 percent) believe support for the ISIS ideology exists within the country and a significant number of Jordanians indicated they are not sure or don’t know (16 percent).

Methodology
The survey, conducted from February 25 – March 1, 2015, consisted of a randomly selected sample of 1,000 Jordanian citizens eligible to vote and is a representation of the Jordanian population by age, gender, geographic location, income and education.  The margin of error for the national sample does not exceed plus or minus 3.5 percent at the 95 percent confidence level and a 96 percent response rate.  The eligibility criteria were based on age (18 years of age or older).

IRI’s Jordan program, funded by the U.S. Agency for International Development, utilizes public opinion polling data to inform decision makers, political parties and civil society of citizen priorities.  In concert with national and municipal public opinion polls, IRI is developing the capacity of Jordanian civil society organizations to understand and conduct survey research.  This is the 12th national poll IRI has conducted in Jordan in partnership with MEMRC.