IRI Ukraine Poll: Interest is High in October 25 Local Elections Amid Pessimism about Pace of Reforms 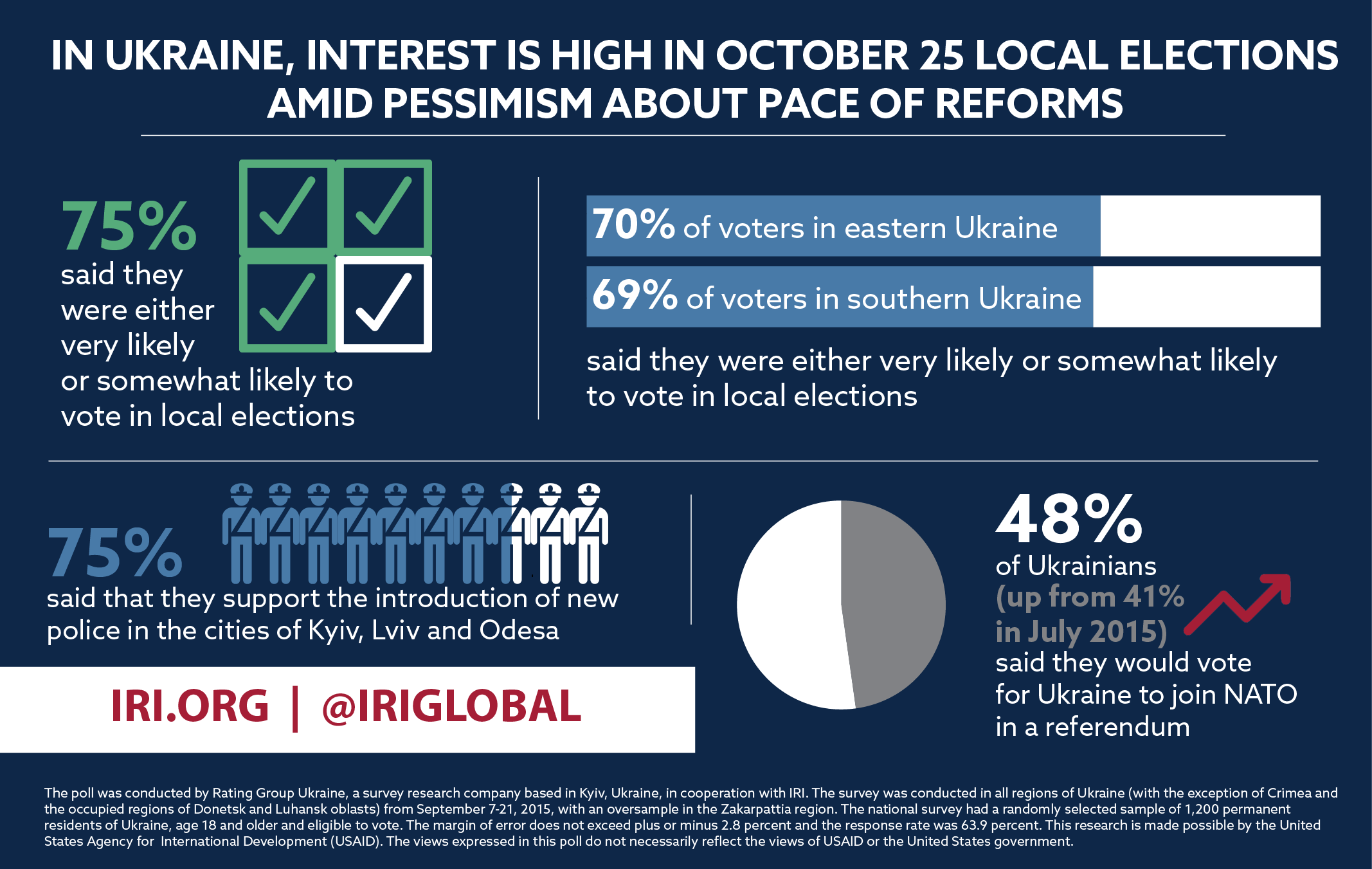 Kyiv, Ukraine – A new poll released by IRI found high voter enthusiasm ahead of the upcoming October 25 local elections, a continuing frustration over the pace of reforms and a troubling lack of understanding about the reforms being pursued.  The poll also found increased public support for NATO membership.

Interest is High in October 25 Local Elections
On October 25, Ukrainians across the country will go to the polls to elect mayors and, regional and city councils.  These elections are critical as newly-elected officials will see increased authority if Parliament passes the proposed decentralization law that is central to President Poroshenko’s reform efforts.

Seventy-five percent of respondents said they were either very likely or somewhat likely to vote in the elections, a 10 percent increase since IRI’s July poll.  Voter enthusiasm is highest in western Ukraine, though strong majorities in eastern and southern Ukraine also intend to vote (70 percent and 69 percent, respectively).

Continuing Frustration with Pace of Reforms
As in IRI’s previous poll, Ukrainians continued to express frustration with the pace of change in their country.  Sixty-eight percent believed that things are going in the wrong direction, and only 11 percent approved of the job that parliament is doing.

One possible explanation is the lack of information on the contents of the government’s reform packages.  When asked to evaluate their knowledge of the decentralization/local governance amendments to the constitution, only 12 percent of respondents believed they were well informed of the reform contents.  Similarly, only 12 percent believed the reforms would improve the situation in Ukraine, compared to 15 percent who believed it would worsen and 46 percent who believed it would not change anything.

“As with IRI’s July poll, this new poll underscores the fact that Ukraine is at a critical juncture,” said Stephen Nix, director of IRI’s Eurasia programs.  “People’s frustration continues to grow with the pace of and lack of information on reforms.  If the government is going to succeed in passing the reforms that so many demanded on the Maidan, they must do more to reach out to voters and explain the reform package to citizens.”

In contrast to the confusion over the contents of decentralization reform, the poll indicated overwhelming support for the police reforms, with 75 percent supporting the introduction of new police in the cities of Kyiv, Lviv and Odesa.  “This is one of the first reforms that Ukrainians can see and it is a clear example of how positively people respond to reforms when they see them take effect in their communities,” said Nix.

Increased Support for NATO Membership
IRI’s poll saw the highest level of support for NATO membership in any survey the Institute has conducted.  When asked whether they would vote for Ukraine to join NATO in a referendum, 48 percent of respondents said they would—a seven point increase since IRI’s last survey—while only 28 percent said they would vote against this decision.  In addition, a strong majority (57 percent) continue to support Ukraine’s integration with the European Union.

Methodology
The poll was conducted in all regions of Ukraine (with the exception of Crimea and occupied regions of Donetsk and Luhansk oblasts) from September 7-21, 2015, with an oversample in the Zakarpattia region (see poll presentation for methodology).  The national survey had a randomly selected sample of 1,200 permanent residents of Ukraine aged 18 and older and eligible to vote.  The margin of error does not exceed plus or minus 2.8 percent, and the response rate was 63.9 percent.

The survey was conducted by Rating Group Ukraine and was funded by the U.S. Agency for International Development.