IRI Ukraine Poll: Support for Reforms Strong amid Frustration over Lack of Progress in Their Implementation 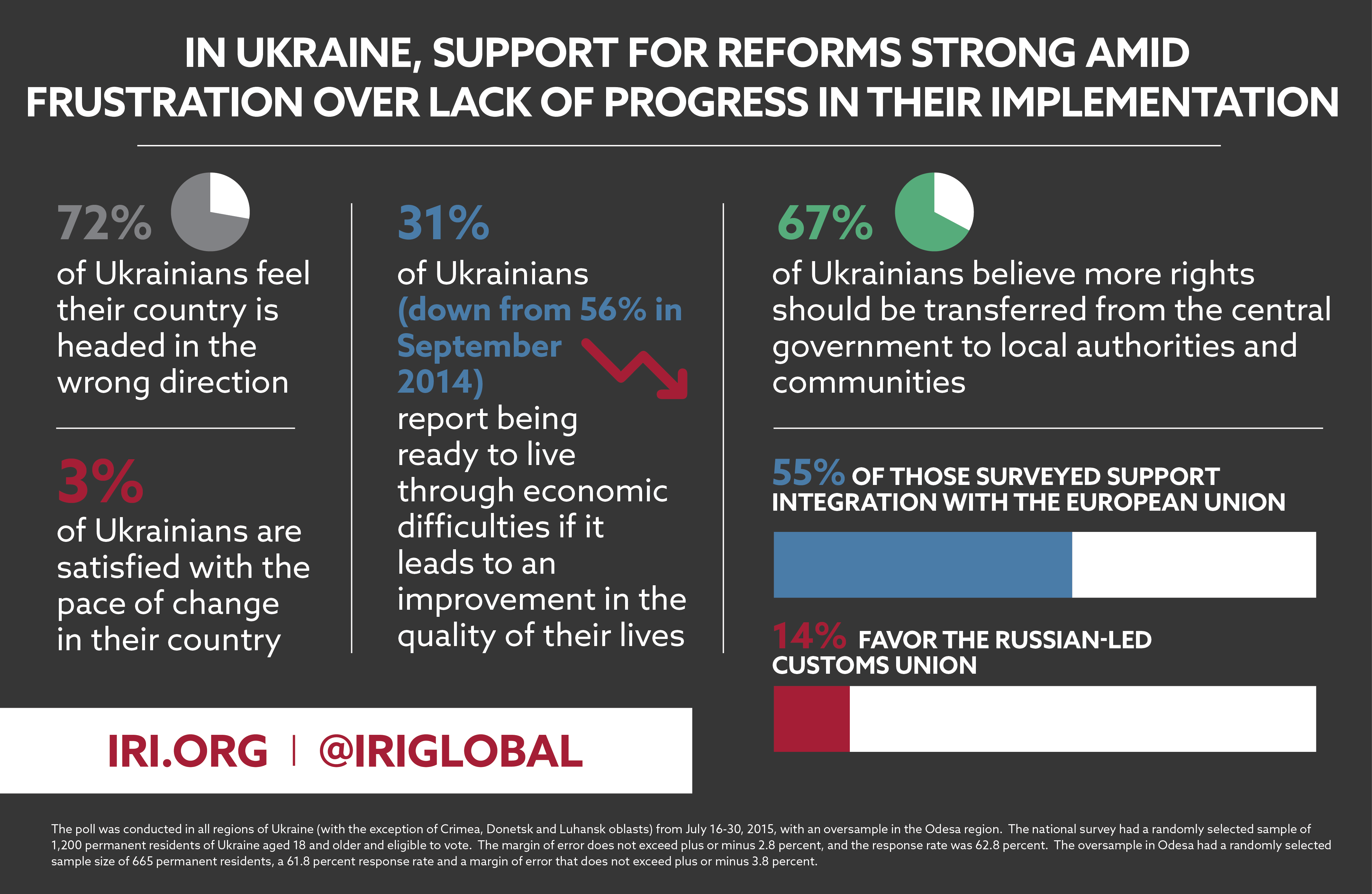 Kyiv, Ukraine – On Ukrainian Independence Day, a new poll released by IRI found that Ukrainians continue to support the pro-European government’s reform efforts, but they also expressed growing impatience with the pace of change in Ukraine.

“IRI’s polling data provides a sobering snapshot,” said Ambassador Mark Green (ret.), president of IRI.  “The government of Ukraine is under enormous pressure.  On the one hand, Russian aggression continues to cause great hardship.  On the other, Ukrainian citizens are impatient to see the reforms that drove them to protest during the EuroMaidan.”

Support for Decentralization Reforms Strong
According to IRI polling data, Ukrainians supported the principles of the pro-European government’s reform agenda, which includes, among other things, decentralization and local governance reforms.  With regard to decentralization reforms, IRI’s poll found that 67 percent of Ukrainians believed more rights should be transferred from the central government to local authorities and communities, and a majority (58 percent) thought their local authorities were ready for this additional responsibility.

Growing Frustration with Lack of Progress
Despite the public support for the government’s reform agenda, 72 percent of Ukrainians felt their country was headed in the wrong direction, citing the ongoing military conflict in the Donbas and corruption within state bodies as the two most important issues facing the country.  In addition, many have grown frustrated with the government’s delayed delivery of promised reforms in the wake of the EuroMaidan, with only three percent of Ukrainians expressing satisfaction with the current pace of change.

Given the state of the economy and the devaluation of the hryvnia, Ukrainians are undoubtedly feeling the impact of the war and the lack of progress on reforms in their own households.  According to IRI’s poll, only 31 percent of Ukrainians (down from 56 percent in September 2014) reported being ready to live through economic difficulties if it led to an improvement in the quality of their lives.

“This trend demonstrates that the window of opportunity to fulfill the demands made on the Maidan is closing in Ukraine,” said Stephen B. Nix, IRI regional director of Eurasia.  “It is critical that the Ukrainian government press forward with the much-needed economic and local governance reforms, as well as anti-corruption efforts.”

Methodology
The poll was conducted in all regions of Ukraine (with the exception of Crimea, Donetsk and Luhansk oblasts) from July 16-30, 2015, with an oversample in the Odesa region.  The national survey had a randomly selected sample of 1,200 permanent residents of Ukraine aged 18 and older and eligible to vote.  The margin of error does not exceed plus or minus 2.8 percent, and the response rate was 62.8 percent.  The oversample in Odesa had a randomly selected sample size of 665 permanent residents, a 61.8 percent response rate and a margin of error that does not exceed plus or minus 3.8 percent.

The survey was conducted by Rating Group Ukraine and was funded by the U.S. Agency for International Development.