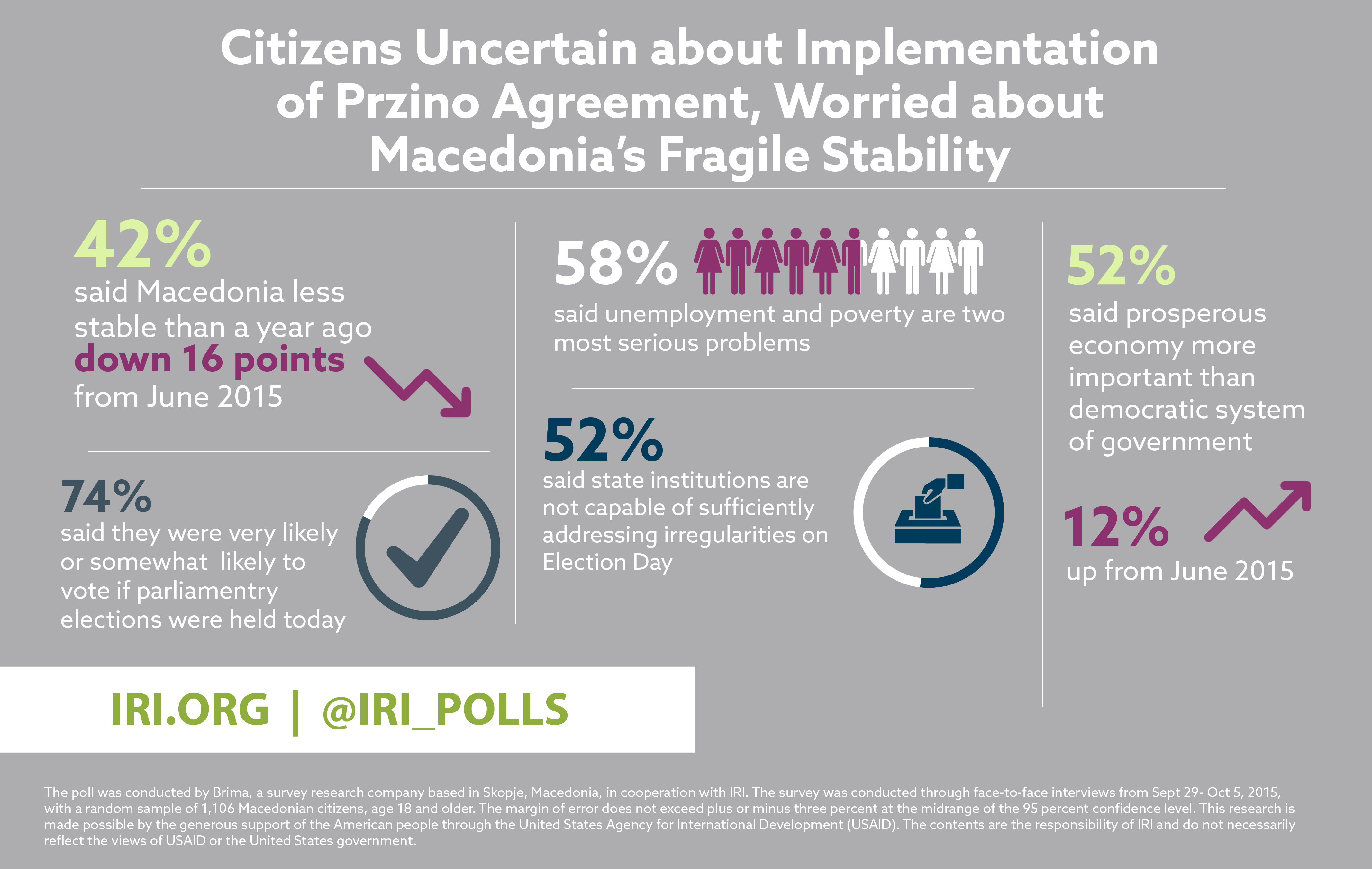 Skopje, Macedonia – According to a new poll released today by IRI’s new Center for Insights in Survey Research, citizens of Macedonia are uncertain about the willingness of the country’s leaders to implement the Przino Agreement, which was signed this summer.  While the overall feeling of instability has decreased, the poll revealed serious concerns about the capacity of institutions to carry out Macedonia’s elections, with citizens doubting the safety of their vote and the credibility of the national voter list.

Given the economic state of the country, bread and butter issues, such as the economy and unemployment, were the top concerns of citizens ahead of April elections, which are stipulated by the agreement.  Of further concern, citizens indicated they preferred a prosperous economy over a democratic system of government, if they had to choose one or the other.

Citizens Remain Skeptical Parties Will Implement Przino Agreement
Following the crisis resulting from the wiretapping scandal in early 2015, Macedonia’s political parties have negotiated the Przino Agreement, which calls for more inclusion of the main opposition party in national ministries, the resignation of the current prime minister, the appointment of a special prosecutor to investigate crimes potentially stemming from the wiretapping scandal, and new elections in April 2016.  Following the signing of the agreement, 42 percent of respondents felt that Macedonia was less stable than it was a year ago, down from 58 percent in IRI’s June 2015 poll.  Although down from a high of 61 percent, 51 percent still felt the political situation was intense and uncertain.

While there is a fragile feeling of stability, many citizens do not have confidence that the responsible parties will fulfill their Przino Agreement obligations.  When asked if they felt that the ongoing negotiations among all four parties would lead to successful implementation of all aspects of the Przino agreement, only 33 percent of respondents said yes, while 24 percent said no.

“To address citizen concerns and restore faith in Macedonia’s democratic processes, it is crucial that political parties and institutions adhere to the commitments made in the Przino Agreement,” said Jan Surotchak, IRI regional director for Europe.  “With the political turmoil that arose out of the first half of this year, it is important to reassure citizens that their elected leaders remain committed to the duties of office.  It is equally important the special investigations into the wiretapping scandal follow due process and are not manipulated by political influence.”

Concerned about State Institutions’ Ability to Protect Elections
While the Przino Agreement calls for early elections, doubts about the integrity of the upcoming elections were evident.  Fifty-two percent of those interviewed said that they believe state institutions are not capable of sufficiently addressing any irregularities, should they occur, on Election Day.  Yet, voter enthusiasm remained high, with 74 percent reporting that they were either very likely or somewhat likely to vote if parliamentary elections were held today.

Respondents also expressed concern about the voter list, with 44 percent saying that they did not have confidence in the credibility of the list.

Anticipating Elections, Citizens Most Concerned about Bread and Butter Issues
As with many countries, the economy and jobs were the top concerns of those interviewed, with unemployment mentioned by 41 percent as the most serious problem facing Macedonia.

“The current national sentiment provides an opportunity for all elected and appointed officials to deliver greater economic prosperity in a democratic way while strengthening citizens’ trust in Macedonia’s democratic system,” noted Surotchak.

Methodology
The poll was conducted by Brima, a survey research company based in Skopje, Macedonia, in cooperation with IRI’s Center for Insights in Survey Research.  The survey was conducted through face-to-face interviews from September 29 – October 5, 2015, with a random sample of 1,106 Macedonian citizens, age 18 and older.  The margin of error does not exceed plus or minus three percent at the midrange of the 95 percent confidence level.

This research is made possible by the generous support of the American people through the United States Agency for International Development (USAID).  The contents are the responsibility of IRI and do not necessarily reflect the views of USAID or the United States government.

The Center for Insights builds on IRI’s two decades of experience in public opinion research and leverages traditional public opinion research and analysis and new tools to help political parties become more responsive to voters, assist elected officials at all levels of government in improving services to citizens, and foster greater participation by underrepresented groups and by citizens generally in the political process.