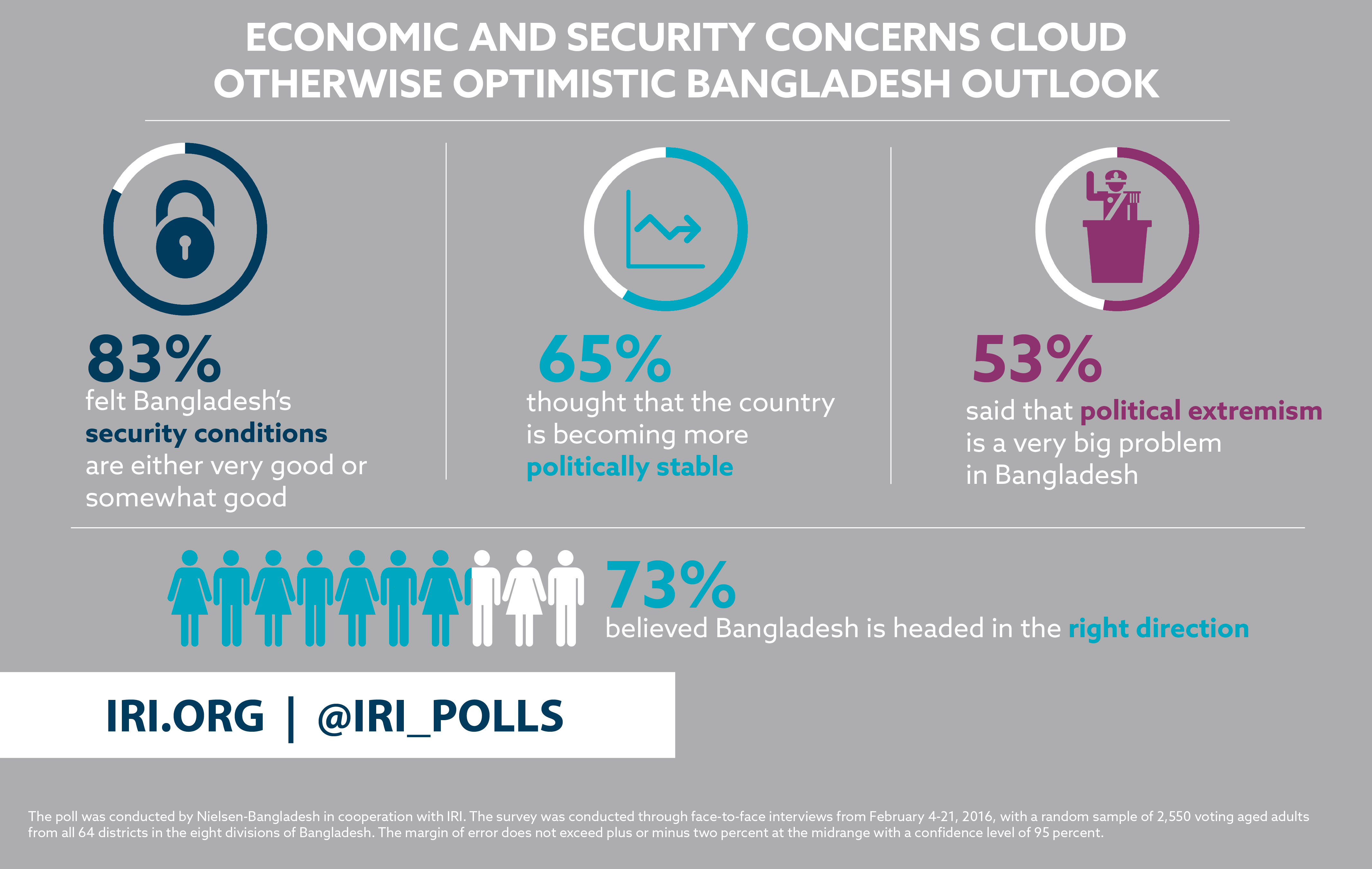 Dhaka, Bangladesh—According to a new poll released on Wednesday, March 30, by the International Republican Institute’s Center for Insights in Survey Research, 73 percent of Bangladeshis feel their country is going in the right direction; a nine percentage point increase since November 2015 and a 38 point increase over the last two years.

Overall, 83 percent of respondents said security conditions in Bangladesh were very good or somewhat good and 77 percent said they feel the country is politically stable.

Respondents were optimistic about the country’s future, including 72 percent who believe their personal economic situation will improve in the coming year, and 65 percent who believe the country is becoming more politically stable. Still, Bangladeshis list the economy and security as their country’s biggest problems. Anxiety about security in particular has increased eight percentage points since November 2015 and, at 21 percent, is now tied with the economy as the most important problem facing Bangladesh.

The percentage of respondents who listed corruption among the most important problems facing Bangladesh dropped from 18 to nine percent since November 2015. The top example of corruption in Bangladesh—cited by 45 percent of respondents—was paying a bribe to secure a job.

For the first time the Center for Insights in Survey Research tested Bangladesh public opinion regarding extremism.  Fifty-three percent of respondents say they feel political extremism is a very big problem in Bangladesh, and 44 percent feel that religious extremism is a very big problem. When asked generally about the main cause of extremism, ‘political differences’ was the most common response with 38 percent, while religious extremism was mentioned by only six percent of respondents (47 percent did not respond).

It is notable that only one percent of respondents said the use of violence was justified while 93 percent said violence is never justified.

The survey was conducted by Nielsen-Bangladesh and the International Republican Institute between February 4 –21, 2016. Data was collected using a multi-stage stratified probability sample and through in-person, in-home interviews.  The sample was stratified by the eight administrative divisions, by district and by urban and rural locations.

The sample consisted of 2,550 respondents (response rate: 43 percent) aged 18 and older, and was representative of voting-age adults nationally.

The margin of error does not exceed plus or minus two percent at the mid-range with a confidence level of 95 percent.

The information in this report has been compiled in accordance with international standards for market and social research methodologies.