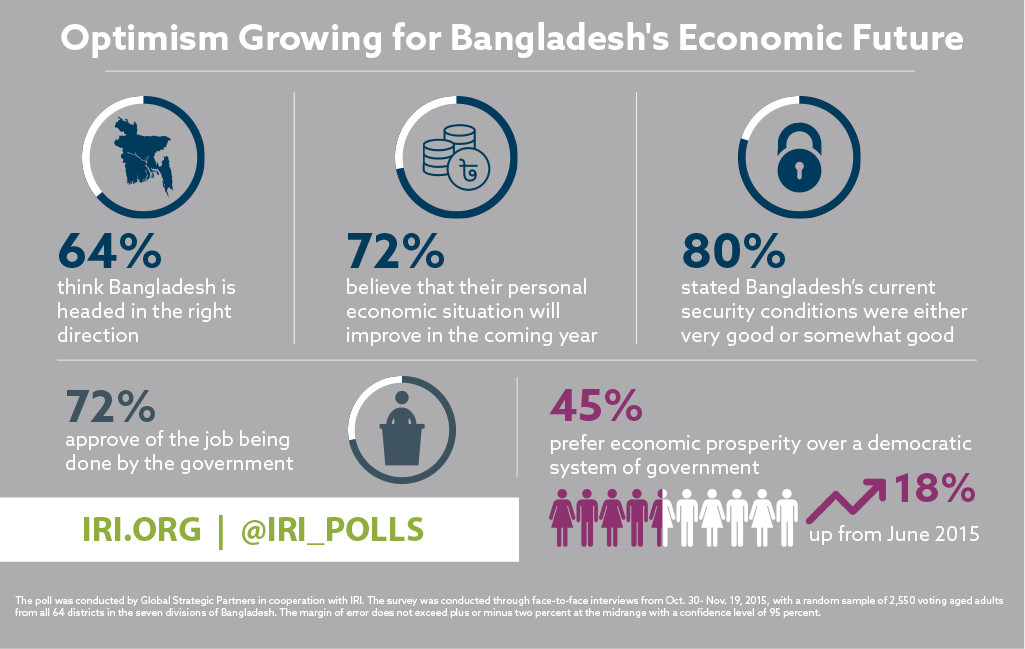 Dhaka, Bangladesh – According to a new national poll conducted from October 30 to November 19, 2015 by IRI’s Center for Insights in Survey Research, respondents remain positive about the direction of their country and are satisfied with the state of the economy.  While a slight majority of respondents prefer democracy, the poll also revealed an increase in respondents who believe economic prosperity is more important than democracy.

Majority Believe Bangladesh is Headed in the Right Direction

Sixty-four percent of respondents believed Bangladesh was headed in the right direction, citing improvements in education, transportation and the economy as the three greatest reasons for the country’s positive trajectory.  Of the 32 percent of respondents who believed Bangladesh was headed in the wrong direction, nearly half cited political instability as the main reason.  However, respondents were increasingly positive about the security conditions in Bangladesh with 80 percent stating that current security conditions were very good or somewhat good, a significant increase of 12 points from IRI’s June 2015 survey.

The survey found that respondents are developing a greater assurance of their future economic well-being.  Nearly 80 percent of Bangladeshi participants stated the current economic conditions were very good or somewhat good, with 72 percent indicating that their personal economic situation will improve in the coming year.  Nine out of 10 respondents stated that their family has enough income to afford basic commodities.   Findings also show that support for the government has increased with 72 percent of respondents stating that they approved of the job being done by the government, an increase of six points from the last survey conducted in June.  Fighting corruption remains a challenge as 49 percent of respondents cited a negative government performance with respect to the issue, versus 47 percent who responded positively.

“The economy is clearly a priority for the Bangladeshi people,” said Derek Luyten, IRI regional director for Asia.   “However, overall stability will play a critical role in sustaining future economic growth.”

As the Economy Improves, Democracy Endures

In the midst of this growing optimism on Bangladesh’s future, the survey showed a shift in the importance placed on a democratic system of government compared to a prosperous economy.  Participants responding that democracy was more important decreased from 68 percent to 51 percent since the June survey, while participants responding that prosperity is more important increased from 27 percent to 45 percent.  However, 88 percent of respondents believed that while democracy might have problems, it is still better than any other form of government.

These are among the findings of the latest IRI survey in Bangladesh, based on face-to-face interviews conducted with a randomly selected sample of 2,550 voting aged adults from October 30 – November 19, 2015.  Conducted in cooperation with international research firm Global Strategic Partners, the nationally representative sample was drawn from all 64 districts in the seven divisions of Bangladesh.  The margin of error for the aggregate sample did not exceed plus or minus two percent at the midrange with a confidence level of 95 percent.